Celebrities get in the spirit with their own liquors. 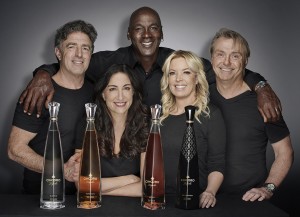 Cincoro Tequila ($70–$1,600)
Cincoro tequila was founded by a group of NBA basketball rivals: Michael Jordan, owner of the Charlotte Hornets; Wyc Grousbeck, owner of the Boston Celtics and his wife Emilia Fazzalari (CEO of Cincoro); Jeanie Buss, president of the Los Angeles Lakers; and Wes Edens, co-owner of the Milwaukee Bucks. Blanco $70; Resposado $90; Anejo $130; and an Extra Anejo aged for 44 months at $1,600. cincoro.com.

Dos Hombres Mezcal ($62)
Following in the footsteps of George Clooney and Randy Gerber, who struck gold with Casamingos tequila, Breaking Bad stars Aaron Paul and Bryan Cranston traveled around Mexico to a hillside village in Oaxaca, where they found the best Espadin agave mezcal. The agave is roasted for four days in an earthen pit and distilled in a copper pot. doshombres.com.

Wild Turkey Longbranch ($40)
When Matthew McConaughey is not driving through pink clouds in his Lincoln Aviator, he is drinking his own small-batch Kentucky bourbon Longbranch. It’s made with eight-year-old Wild Turkey refined with Texas mesquite and oak charcoals. It has a smoky sweetness and flavors of caramel, citrus, pepper and toasted oak. wildturkeybourbon.com.

Born and Bred Vodka ($30)
Created by Magic Mike actor Channing Tatum, Born and Bred is an American vodka made from Idaho potatoes and glacial water from the Grand Tetons. Distilled at the Grand Teton Distillery in Driggs, Idaho, the vodka has a slightly sweet aftertaste due to the high mineral water. It’s been featured in Tatum’s movies Kingsman: The Golden Circle and Logan Lucky. bornandbred.com.

Blackened Whiskey ($45)
Inducted into the Rock and Roll Hall of Fame, Metallica, the band that sold 120 million albums, released a seven-year aged whiskey with an interesting innovation. The late Master Distiller Dave Pickerell used sonic enhancement to transform the whiskey on a molecular level with a subwoofer employing the same range and vibrations of a Metallica concert. blackenedwhiskey.com.

Aviation American Gin ($30+)
Deadpool star and 15th-highest paid Hollywood actor Ryan Reynolds took a significant ownership stake in Portland-based Aviation American Gin in 2018. For Reynolds, it all started with Negronis. He would always order one, and he didn’t know why he liked it until he found out it was made with Aviation. aviationgin.com.

A print version of this article appeared with the headline: Boldface Names

This article appears in the December 2019 issue of CTC&G (Connecticut Cottages & Gardens).