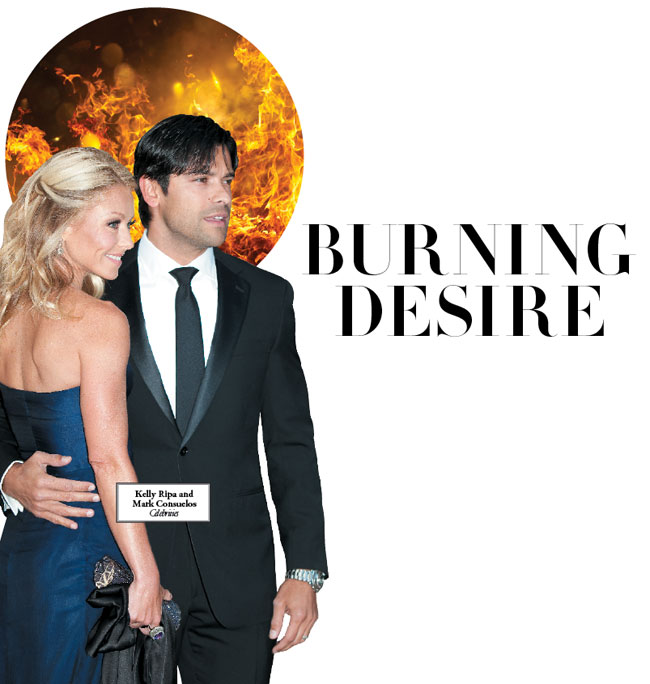 With summer edging its way into fall, nothing beats the most rarefied perk in New York’s penthouses: not only private outdoor spaces where homeowners can soak up the last few rays of sunshine and enjoy drop-dead city views, but also a fireplace to take the chill off autumn evenings. Several listings on the market currently offer both. The outdoor fireplace on Kelly Ripa’s 3,073-square-foot roof deck in SoHo might be one reason the talk-show host is always so chipper.
But now she and her husband, actor Mark Consuelos, have listed their penthouse at 76 Crosby Street for $24.5 million. Complete with a gourmet kitchen boasting two Electrolux dishwashers (Ripa is a spokesperson for the brand), the five-bedroom, 6,792-square-foot apartment includes his and her walk-in closets and a staircase that curves around a Balinese-style wall—perfect for making grand entrances (though Ripa always looks good, thanks to the home gym, which opens onto an outdoor grotto with a hot tub and shower). 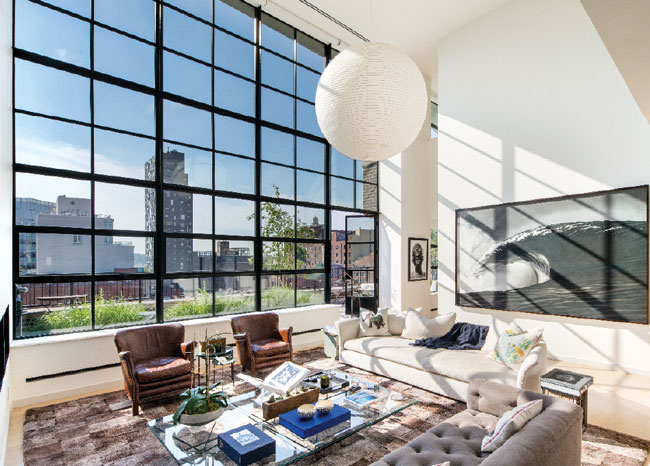 Sizzling A Chelsea penthouse with a six-foot-wide outdoor fireplace is listed for $11.75 million with Halstead’s Richard Orenstein, 212-381-4248.

At 456 West 19th Street, the outdoor gas-burning fireplace at Penthouse H is a whopping six feet wide. “It’s kind of like a piece of art,” says listing broker Richard Orenstein of Halstead, making it a cohesive fit for the gallery-filled neighborhood where the Cary Tamarkin–designed building sits. “It’s dramatic, but still very cozy.” Listed at $11.75 million, the duplex also features soaring double-height casement-style windows and a wraparound terrace that overlooks the grass-lined walkways of the High Line.

If Central Park’s swaths of green are more your speed, the penthouse at 1158 Fifth Avenue—a virtual English country house in the sky—is on the market for the first time since 1975, when owners Pamela and Richard Scurry, then newly married, purchased it. From its 40-foot terrace overlooking the park, “you can gaze at the stars and moon at night,” says Brown Harris Stevens’s Linda F. Stillwell, who has the $17 million listing. A separate portion of the terrace was enclosed with a 16-foot-high glass conservatory (inspired by the Cooper-Hewitt design museum on nearby East 91st Street and the Grand Palais in Paris) and leads to a solarium with a wood-burning fireplace. Pamela Scurry, a decorator, designed its marble facing and floral frieze, in accordance with the laurel details in the building’s lobby (she oversaw its restoration).

Love terraced top floors with fireplaces, but don’t have that kind of money to burn? The one-bedroom penthouse at 230 East 50th Street in Turtle Bay can be yours for only $799,000. “You can get a glimpse of the East River,” says listing broker Philip Horigan of Corcoran, “or sit inside by the fireplace and take in the gorgeous city views.” The terrace wraps around the entire apartment, connecting the living room and bedroom, “so you can have a nice evening stroll as you go to bed,” Horigan adds.

Willing to forgo the fireplace in exchange for no fewer than four separate terraces? The 6,540-square-foot penthouse at the Whitman has just hit the market with an asking price of $25 million. This top-floor duplex in a four-unit building—NASCAR driver Jeff Gordon and Chelsea Clinton have reportedly purchased apartments on lower floors—features treetop views of leafy Madison Square Park. “The Whitman’s penthouse is fabulous,” says Dottie Herman, president and CEO of Douglas Elliman, which has the listing. “It seamlessly blends indoor and outdoor living” via two park-facing terraces, one in the back, and an interior terrace off the upper floor’s master suite, totaling more than 3,000 square feet of outdoor space. In late July Douglas Elliman hosted a stylish cocktail party there, attended by top brokers such as Million Dollar Listing New York star Fredrik Eklund, with interiors staged by Jeremiah Brent of The Rachel Zoe Project (a.k.a. designer Nate Berkus’s fiancé). Hors d’oeuvres were served out of the restaurant-grade kitchen, which includes four ovens and “grow lights” for an herb garden—not that there isn’t enough space for growing herbs on the terraces.—Rebecca Morse

Wait, can you hear me now? How about now? When Verizon is your downstairs neighbor, good service should be a given. Verizon was using 212 West 18th Street as storage for copper wire when developer JDS bought the building, which was commissioned in the 1920s by the New York Telephone Company and designed by architect Ralph Thomas Walker. Its Art Deco brick façade now fully restored, today Walker Tower houses 50

apartments with sumptuous details like radiant-heated floors and Smallbone of Devizes kitchens. Fewer than ten units are currently available (celebs such as Cameron Diaz and Blake Lively have reportedly sniffed out the residences), including a 2,691-square-foot 19th-floor aerie with views of the Statue of Liberty and the Empire State Building, three bedrooms and four baths, and a price tag of $12.5 million. Soundproof floors and 18-inch-thick walls keep the apartments pin-drop quiet, even when the Crestron audio system is cranked to capacity. All units are pre-wired for high-speed internet, phone, and data, but just in case you get disconnected, the bottom ten floors of the building are still occupied by Verizon, which means the telephone repairman is only an elevator ride away. —R. M.

the market heats up

Looks like we’re in for a hot fall. According to all reports, the spring’s super-heated housing market simmered through the summer and may stay steamy through the holidays, as buyers scramble to take advantage of still-low (but rising) mortgage rates and home prices. Among New York City’s northern suburbs, lower Westchester County is the hot spot, posting a 26 percent increase in dollars spent on residential real estate in the spring and early summer, as compared with the same time period in 2012. And luxury listings priced at $2 million or higher—previously a sluggish market sector—are what’s moving. Realtor Pati Holmes with Julia B. Fee Sotheby’s International Realty says that many buyers at the high end are favoring convenience over square footage or lot size, preferring short-commute homes in Scarsdale, Larchmont, and Rye. 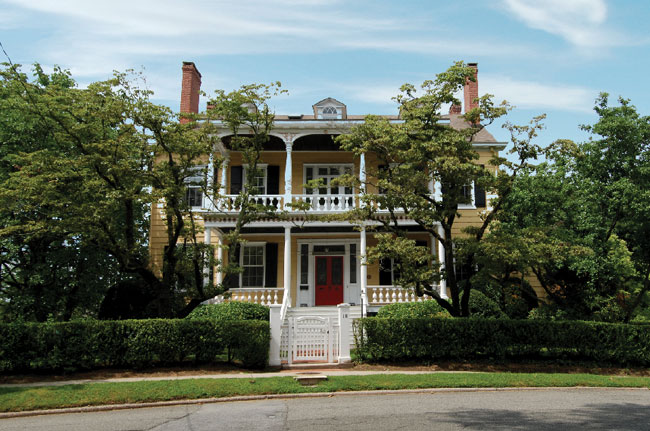 Larchmont Luxury Close to town and Long Island Sound, this 1797 Federal-style house on nearly 1.5 acres features double porticoes and is listed for just under $5 million with Cini Palmer of Julia B. Fee Sotheby’s International Realty,
914-649-2244.

And the dreaded bidding wars have resurfaced (though brokers prefer the more politic phrase “competitive bidding”). Holmes cites a five-bid contest for a lovely Rye Colonial within walking distance of the local elementary school and just a short drive to the train station (the commute to Grand Central is 35 minutes). Listed for $3.795 million, it sold early last month for $4.5 million. Still on the market—for the moment, anyway—is a grand 1797 Federal-style house that put the “manor” in Larchmont Manor when it was built during the early years of the enclave’s development. Not far from town and Larchmont Harbor, it’s a many-gabled affair, with deep covered porches on both stories and a 1.44-acre lot. The property is listed for $4.995 million with Cini Palmer of Julia B. Fee Sotheby’s International Realty in Larchmont. —Diane di Costanzo

Former Yankees outfielder Bernie Williams, who traded his bat for a guitar after retiring from baseball in 2006 and now spends his time recording Latin-influenced ballads, has put his Lower Westchester home on the market. Located in the gated Thomas Wright Estates community in Armonk, a pretty town that’s home to IBM’s global headquarters, the imposing 9,000-square-foot house features a traditional brick façade and an expansive pool and terrace out back. The interiors are also—pun intended—fully loaded, offering a recording studio and a home theater, along with six bedrooms and six bathrooms. It’s listed for $3.5 million with the Del Vecchio Scarano Team at William Raveis in Chappaqua. —D. C.

In northern Westchester, Bedford is still in demand, says Realtor Muffin Dowdle of Ginnel Real Estate. It appears that Martha Stewart—who lives in Katonah, a Bedford hamlet—is extra bullish on the barrio, even though she already owns the much-photographed 153-acre estate dubbed Cantitoe Corners. The New York Post reports the domestic diva took a look at a 22-acre Bedford Hills estate called Twin Ponds, which features a stunning glass house built directly over the water (the asking price is $30 million). 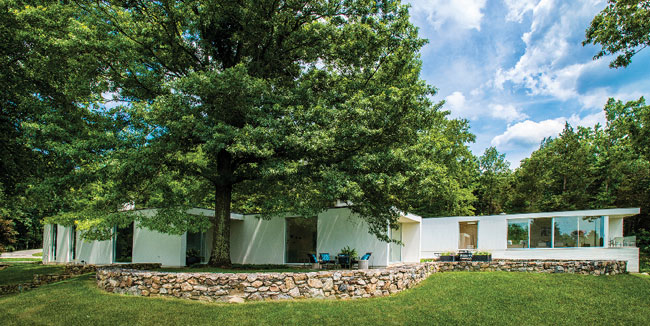 If Stewart’s in a modern mood, she might want to consider the circa-1969 Bedford home Dowdle just listed at a more wallet-friendly $4 million. Built by architect Edward Larrabee Barnes (the IBM building in Manhattan, the Walker Art Center in Minneapolis, and a Rockefeller residence or two), it features pristine, light-filled interiors designed by the late Benjamin Baldwin, who often collaborated with modern masters Louis Kahn and I. M. Pei. Clocking in at 5,000 square feet on 5.5 acres, it’s not far away from the posh and popular Bedford Post inn, a restaurant and hotel owned by Bedford resident Richard Gere, who has apparently chosen the country over the beach. The actor made real estate headlines this summer when his Hamptons estate went on the market with an ambitious—but in these times not unheard of—$65 million price tag. —D. C.

Less expensive and much more puzzling is the real estate listing of a one-bedroom Mt. Kisco barn, offered for rent by owner Chevy Chase for $1,800 per month, according to realtor.com, which erroneously reported that the property’s main house was also available for rent for $20,000 per month. Bloggers spent the dog days of summer speculating as to why the comedian would trade his privacy for such a modest rent roll. Was he in financial straits? Or perhaps just looking to celebrate the 30th anniversary of Summer Vacation by giving fans a chance to have a few good laughs with him?

In nearby Pound Ridge, another barn with Hollywood hay in it was recently put on the market, along with a 3,300-square-foot main house, for $1.4 million. Evan Hunter, who helped Alfred Hitchcock pen The Birds in a writing studio inside the two-bedroom barn, once owned the property (he was also the author of a best-selling series of creepy crime novels published under the pseudonym Ed McBain). The place’s current owner, James Hart, is a screenwriter and producer with creepy credits of his own, including Bram Stoker’s Dracula and Mary Shelley’s Frankenstein. Despite the gruesome stories dreamed up here, the estate is utterly bucolic and comes with a pool and five acres. It’s offered for $1.4 million with Sally Slater of Douglas Elliman Real Estate in Bedford. —D. C. 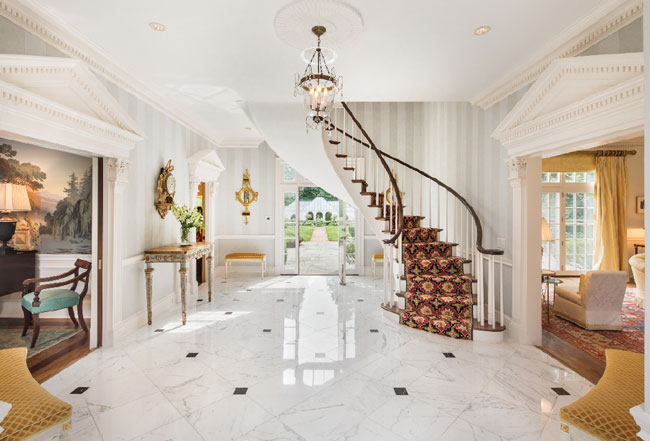 Beechfield, a Gold Coast estate in Mill Neck—a tony village that Rockefellers and Vanderbilts once called home—is on the market for $4.25 million. Located on 3.3 acres and including a Palladian-style pool house, the 1987 mansion has five bedrooms and five fireplaces and “was modeled after the work of architect William Lawrence Bottomley, who designed numerous brick Georgian manors in the 1920s in Richmond, Virginia, as well as on Long Island,” says Gail Bushey, associate broker with Daniel Gale Sotheby’s International Realty, which has the listing. —Barbara Thau