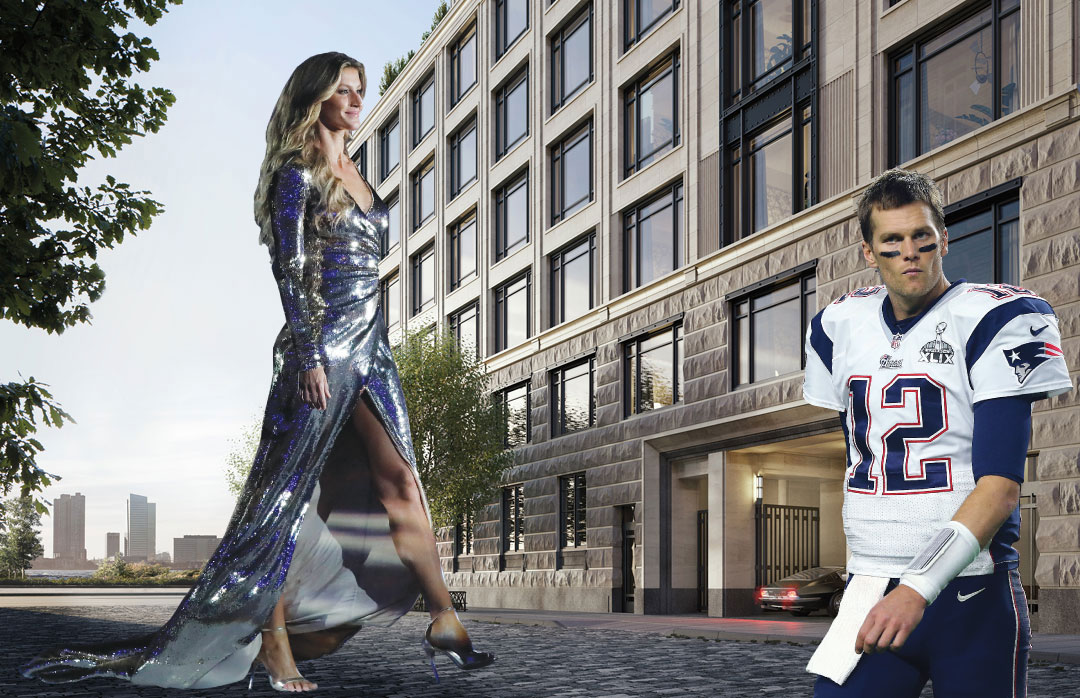 At the opening ceremony of the Summer Olympics last month, Brazilian supermodel Gisele Bündchen strutted down a runway to the famous bossa nova tune “The Girl from Ipanema”—but everyone knows she’s light-years away from the beaches of Rio de Janeiro. She and her New England Patriots QB hubby, Tom Brady, just sashayed into a five-bedroom, 5,000-square-foot condominium complete with a terrace in the Robert A.M. Stern–designed 70 Vestry in Tribeca. Currently residing in Flatiron’s One Madison, the couple shelled out more than $20 million for their piece of the luxe new building, which will open in 2018 and feature amenities such as an 82-foot lap pool, a cycling facility, yoga and pilates studios, a squash court, a sauna, and a steam room.

Brady and Bündchen aren’t the only celebs who have been drawn downtown. Actor Ben Stiller and his wife, actress Christine Taylor, recently picked up a four-bedroom, $15.1 million pad at 150 Charles in the West Village, where their neighbors include Jon Bon Jovi and model Irina Shayk. (NYC&G reported on Shayk’s $6.08 million purchase in the building in its May/June issue.) Actress Robin Wright is also calling the West Village home, having paid $3.025 million this summer for a renovated two-bedroom prewar co-op, although media mogul Rupert Murdoch is unloading his 6,500-square-foot townhouse nearby, pocketing $27.5 million for it in July after acquiring it in March 2015 for $25 million. Among other bold-faced names taking advantage of a hot market are Maroon 5 front man and The Voice personality Adam Levine and his model wife, Behati Prinsloo, who will welcome their first baby this month. They sold their one-bedroom loft in SoHo, listed in April for $5.5 million, in just two months, and have also put their Beverly Hills residence on the market for $17.5 million. Looks like Levine’s bachelor-pad days are over. Meanwhile, actress Parker Posey sold her Greenwich Village co-op for $1.45 million in two months, and actor Alan Cumming found a buyer for his $2.2 million East Village co-op after just one month. Better act fast when a star’s name is attached.