Designer Celerie Kemble is known for her independent spirit, whimsical design sensibility, and creative panache. On a tight deadline, Kemble was able to magically transform a Manhattan apartment circa 1927 into a lush and luxurious space.

There was a time when
no address was more glamorous than the Barbizon Hotel for Women. Opened in 1927, the brick Italian Renaissance–meets–Gothic structure at the corner of 63rd Street and Lexington Avenue has been home to onetime ingénues including Grace Kelly, Joan Crawford, and Candice Bergen—young women who were determined to make their mark on New York while being sheltered from Gotham’s sordid evils. So it seems only fitting that a contemporary version of the gal-about-town, Celerie Kemble, known for her independent spirit, whimsical design sensibility, and creative panache, was commissioned to take on a plum decorating project in the recently revamped building.

Converted into luxury condos in 2006, the rechristened Barbizon/63 is just as desirable a residence today. “Our clients found us through a book of mine and hired us on blind faith,” says Kemble of the out-of-towners, who wanted to turn their unit into a chic, comfortable, low-maintenance pied-à-terre. “They flew into the city to meet us and expected their home to be ready by the next time they came to town. They had no intention of micromanaging us; the only criterion was that pieces had to be genuine and not look like they came from a showroom. This project was really about using our local New York resources. When you have an impossible deadline, expensive materials, and lots of labor involved, you have to work with the people you believe in, and those people are right here in the city.” 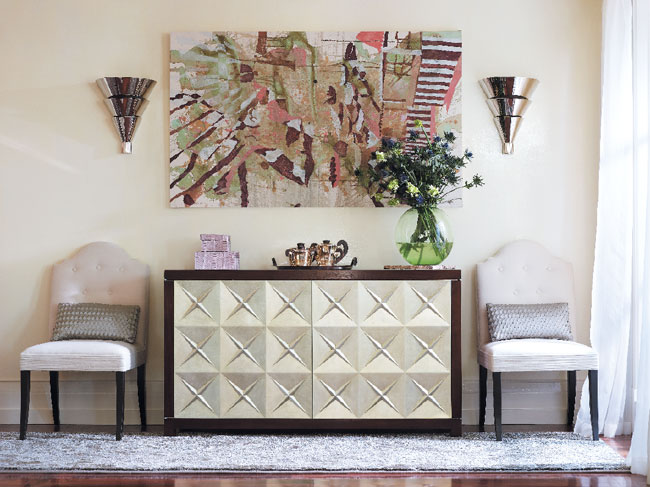 The end result of the four short months Kemble Interiors had to work on the project: a light-filled space that sits serenely above the bustling streets, almost as if it’s floating on a cloud. Virtually every surface is treated with a specialty finish. “The greatest tool we had to work with was texture, and we thought a lot about the reflection of light in the apartment too,” says Kemble. “The space needed to seem like it was eternally lit.” Alpha Workshops, a New York–based decorative arts studio and one of Kemble’s regular go-to sources, created the shimmery paper that lines the walls from the front entry to the hall. “It’s a quiet geometric with an opalescent glow, and it’s very dynamic for something so neutral. I didn’t want anything that would make the space feel crowded or too intense. The way the paper reflects the light is subtly dramatic.” 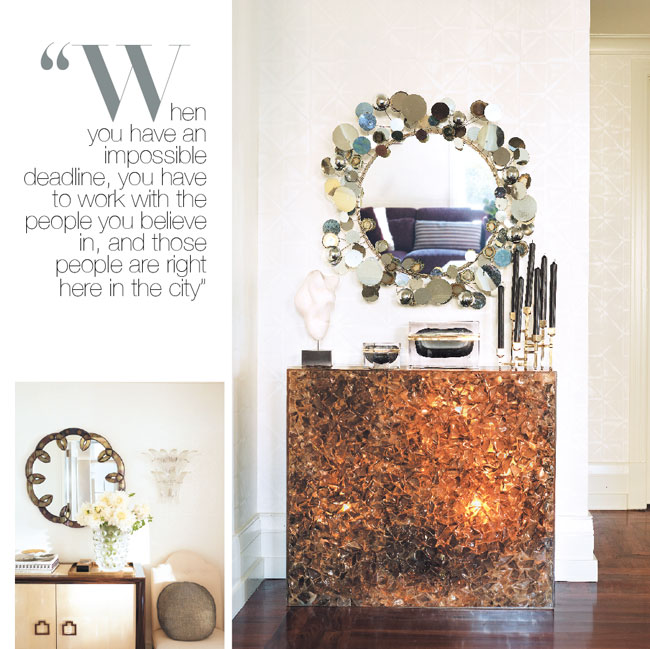 In the living room, Alpha Workshops also hand-applied silver leaf to the ceiling and finished the walls with a hand-rubbed ivory and cream paint that resembles the striations and gloss of an elephant’s tusk. Adding extra glint are hand-blown glass objects by Brooklyn-based artisan Nick Leonoff, which complement light fixtures by Barovier & Toso and Cedric Hartman. “We have the big boy Italians and our own Brooklyn artist for more levity and color,” says Kemble.

Luxurious notes characterize virtually every accessory, from fox fur pillows to a Holland & Sherry embroidered cashmere throw to snakeskin boxes and picture frames by New York–based designer Robyn Brooks. Shagreen finishes from Etched Design in New York cover custom furniture, and Lucite legs on armchairs lighten up a more stolid channel-backed banquette in the dining area. The master bedroom’s ceiling is even covered in tiny crystal balls that give off a luminous glow, while custom reverse-painted glass and silver-leaf closet doors reflect the windows across the room, creating a sense of dreamy light. 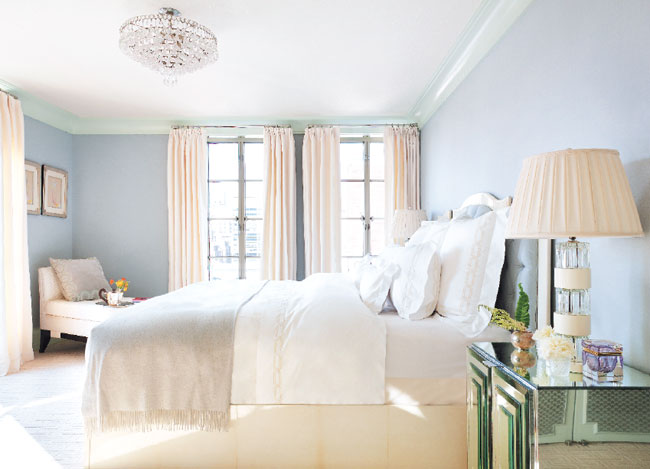 “Every surface is as luxe and delicious as possible,” says the designer. “I think of Kemble Interiors as a team that includes all our contractors and artisans, down to our delivery guys. There were times when the space couldn’t even accommodate all the people who were there working on it, sort of like a madcap beehive. But somehow it all came together, thanks to trust and experience. I’m so grateful to have such a talented team.”