The dark palette and marvelous decor bring this Woodbury home to life. 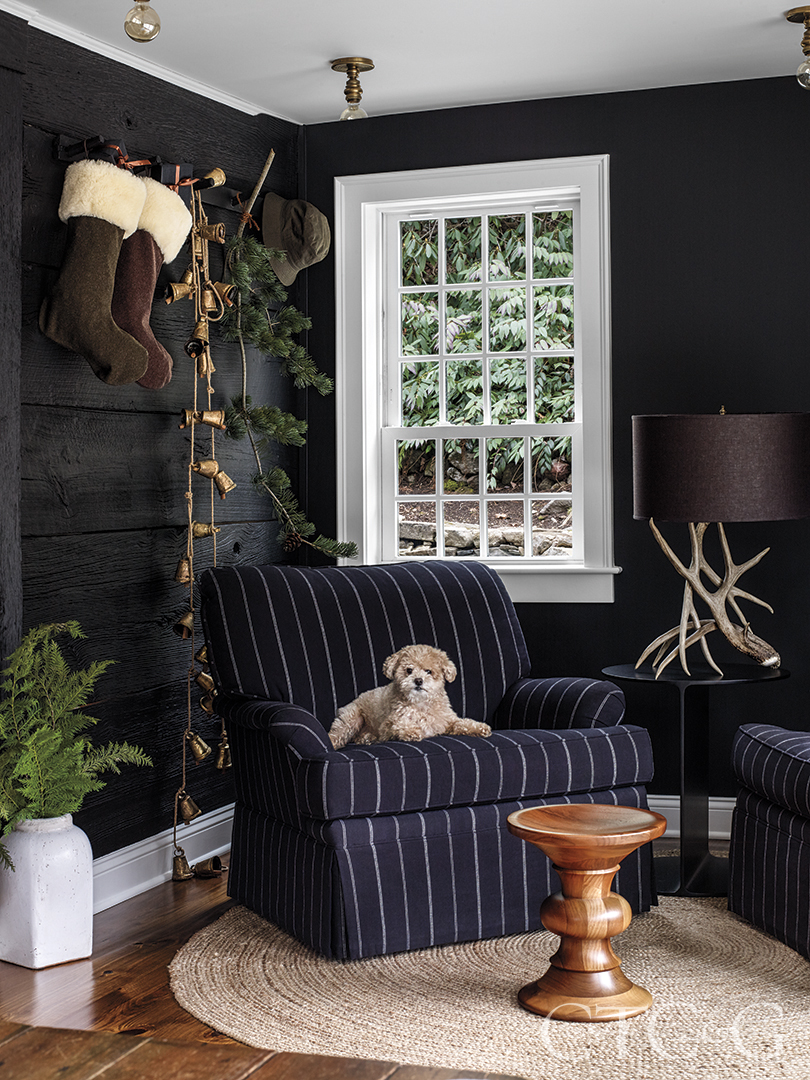 In the outskirts of New England, Jon Tutolo and David Krauk often find random notes pinned to their front door. And sometimes, a stranger might knock on the door, needing to ask: “What is your paint color?” They’re all referring to the dark hue chosen for the exterior of the couple’s 1870 saltbox. The answer: Benjamin Moore’s Deep River.

“We love this color because it changes tones during the day,” says Tutolo, who, like his husband, Krauk, is a freelance creative director. “One part of the day, it’ll look black, but as the day goes on, it’ll change to gray or brown.” Krauk adds, “Or, our favorite, hunter green.” 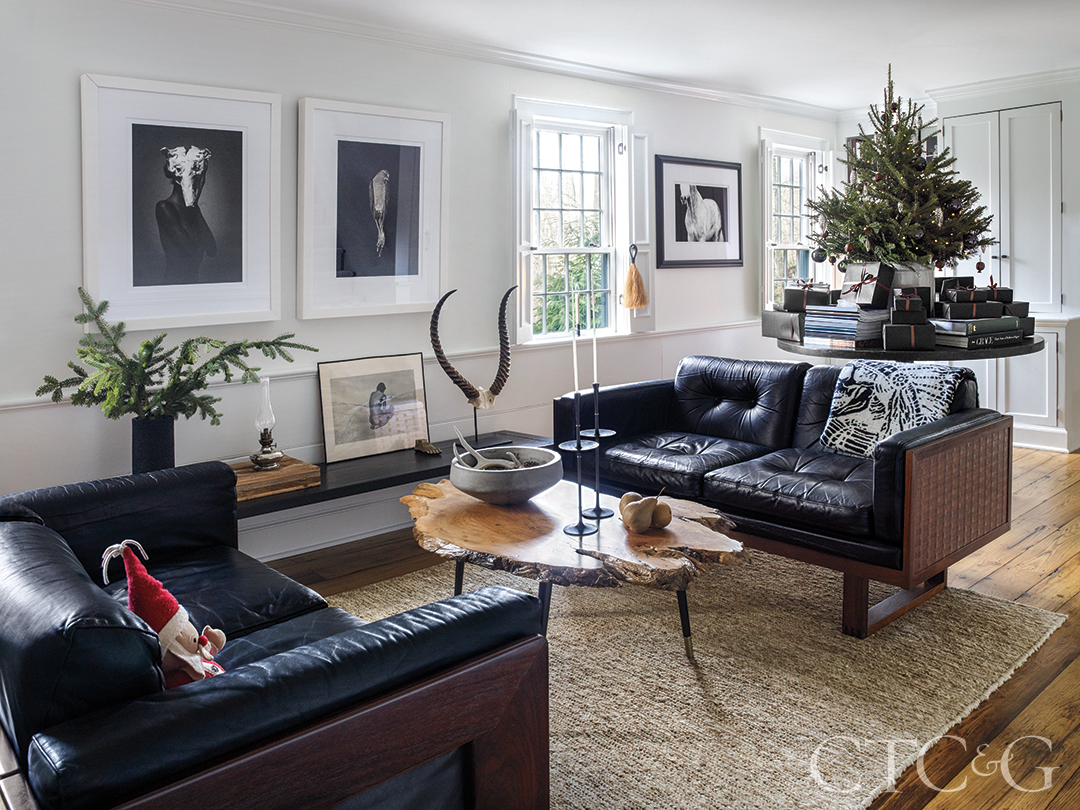 Since moving to Woodbury, the pair has embraced Litchfield County with zeal of the true Connecticut Yankees. Even though both, in fact, hail from Dallas, they are on cloud nine with their New England home. They recall the day they discovered the area and their house. “We were in our New York apartment on a cold February weekend and had a bad case of cabin fever,” Krauk recounts. “We’d read about a shop in New Preston called Plain Goods. So, we drove up, met the owners, fell in love with the area, and decided to find a way to stay.” Tutolo expresses, “I have always had an affection for Americana and New England, with its changing seasons. A drive through Connecticut in any season confirms that.”

The couple concurs that winter is the coziest time of the year, especially when there’s snowfall. “We’re both suckers for warm apple cider and Christmas carols,” admits Tutolo. He continues, “and ever since been together, we decorate for the holidays.”  Their emphasis is on the natural and organic, often gathering hydrangeas and pine branches from their two acres. 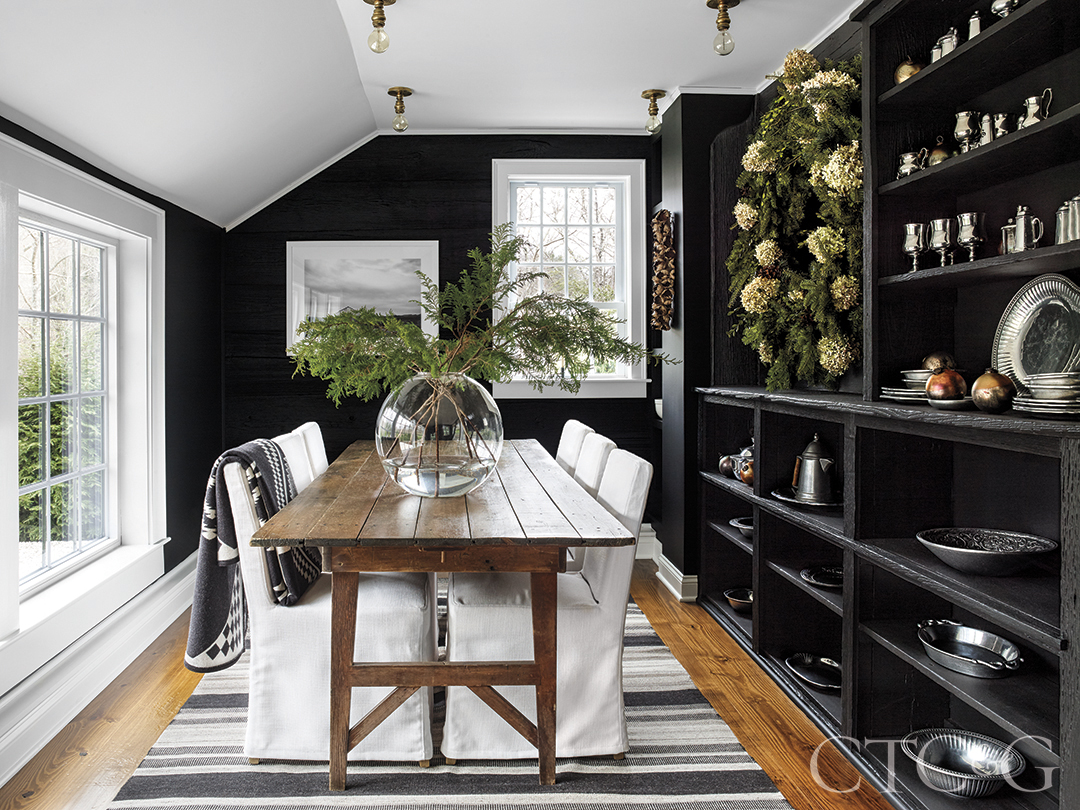 This season, the dining room wall displays a giant wreath they fashion themselves, while a table in the entry carries a joyful tabletop tree. It’s there, too, they place their wrapped gifts to each other, color coordinated with black paper and bronze ribbons.

A small Christmas tree adorns their master bedroom, an area that was once a rudimentary attic space. “With the tree lights on at night, it creates a beautiful glow from the bed,” says Krauk. They also enjoy putting out finishing touches, such as prized collections from past years. One of them being Tutolo’s boyhood stuffed Santa, which ultimately has to be hidden from their adorable Maltese-Poodle, Gus. They say he gets a little too suspicious of anything that’s the same size as him.

When they purchased the house, it had been abandoned for years. But upon entering, they could see that its “bones” were intact. The updated interior detailing, however, was where its transformation would begin. “We wanted to restore the house, inside and out, to look like it’s of its period,” says Tutolo.

They replaced doors, hardware, fixtures and, notably, enclosed a screened-in porch to make it into a dining room. They removed its brick floor, replacing it with hardwood flooring, as a way to warm up the room, aesthetically and actually. The Benjamin Moore Tricorn Black they chose for its walls and shelving sets off their collection of family heirloom pewter ware, while also linking the room to others in the house.

While they wanted a neutral palette to prevail throughout, the couple cites a pair of black vintage Knoll leather sofas as the “jumping off point” for all of the home’s purchases. Stairway treads and handrails were painted black, while certain lampshades and other armchairs are also in that hue. “Black is a thread of continuity that carries throughout the house,” says Krauk, with Tutolo adding, “We wanted something in each room to pick up something from a prior room. We wanted the rooms to feel not disconnected.”

The print version of this article appeared with the headline: Mastering Chiaroscuro.
Subscribe to C&G

This article appears in the December 2020 issue of CTC&G (Connecticut Cottages & Gardens).