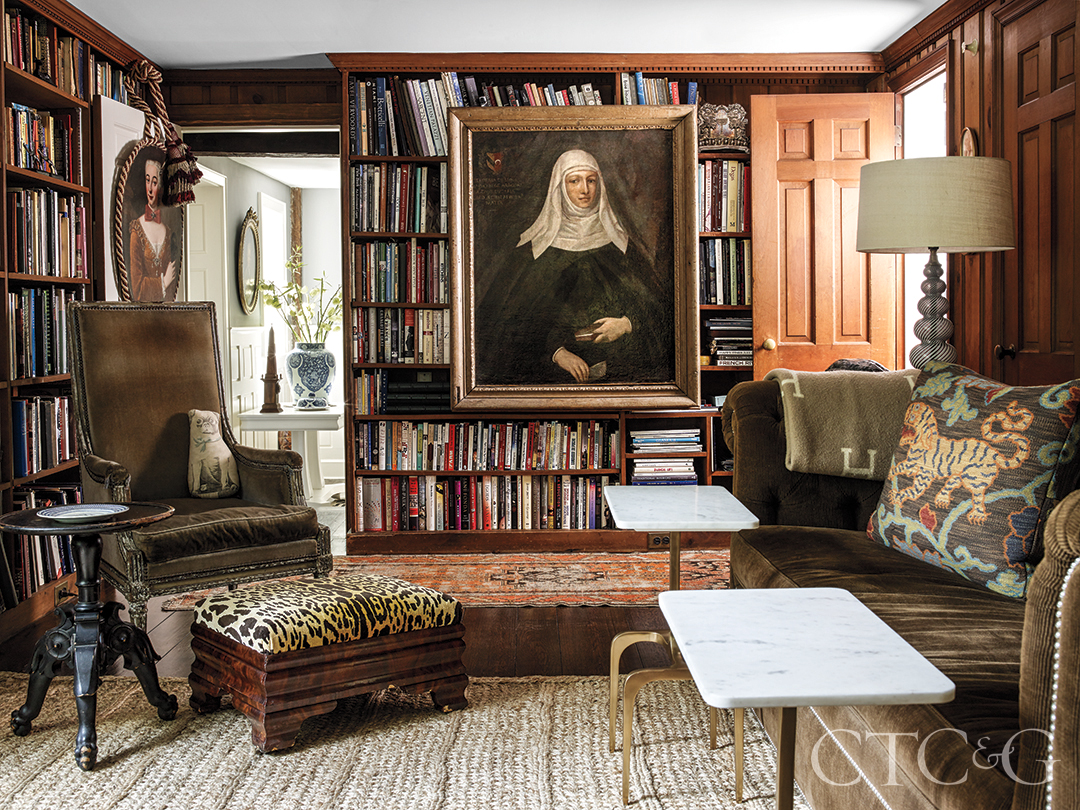 Andrew Frank and Jeffrey Libby have a favorite kind of guest, who might best be called what Frank refers to as a “meanderer.” To walk into the couple’s circa-1750 Norwalk Colonial means encountering so many unique objects and artworks. One could say it is near impossible to not respond to the one-of-a-kind items. Still, some people might see everything from their marble obelisks to a porcelain royal crown and offer no comments.

“When we have people over, we always find there’s that someone who starts looking around,” says Frank, an interior designer with his own namesake firm based in Norwalk. “They touch the things we have out, they ask about things, they respond to our collections and we like that.”

When Frank and Libby purchased this white clapboard Colonial, they decided to raise some ceilings, open up rooms, and convert a garage into a family room. Beyond the intense reconstruction of the home, they were faced with an even more daunting task: melding their collections. Frank, who had lived for years in Paris, Miami and New York City, has amassed many things. Some of these treasures he acquired via the antiques stores he once ran. 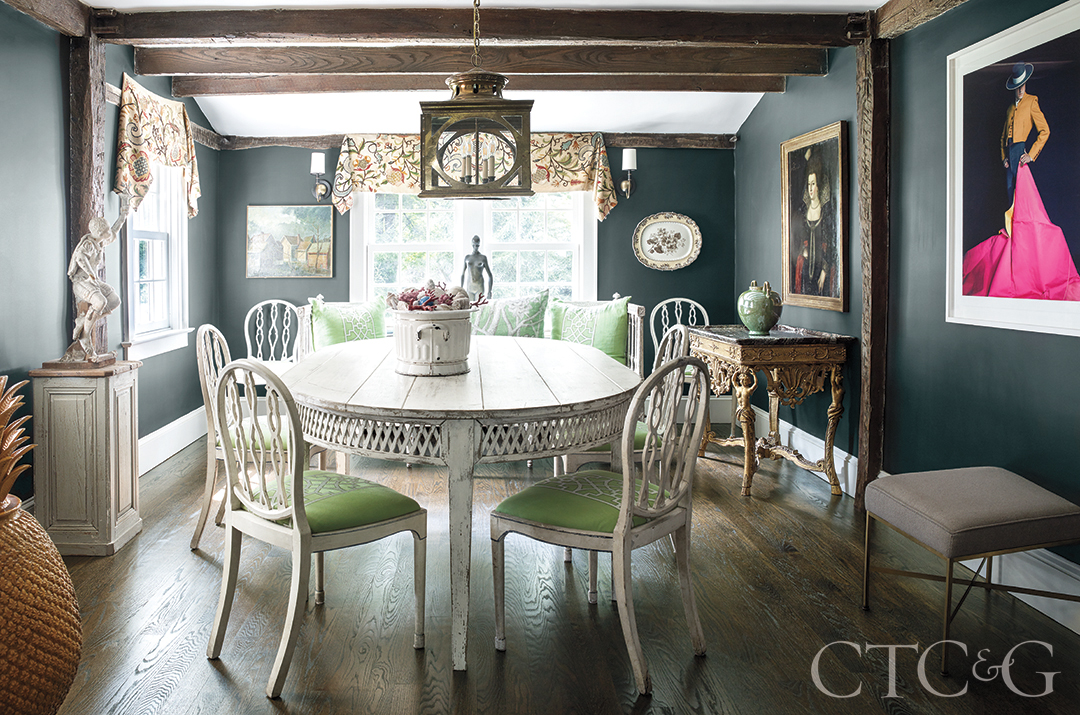 “We knew from the beginning that we were going to have to find this balance of what is his style and what is mine,” Frank stresses. Even though Frank characterizes his collecting habits as “more formal and European” and Libby’s as “a bit more informal and American,” the resulting rooms of their five bedroom Colonial are immediately engaging assemblages of disparate, yet seemingly cohesive items. “After we did a necessary editing of our two things, we created this one home,” says Frank.

Upon purchasing the classic Colonial to share as a couple, Frank and Libby were careful to preserve the inherent integrity of the house, while brightening the interiors and fostering a more open floorplan. The original 18th-century oak beams in the dining room, for instance, were period elements to preserve, while a kitchen composed of jumbled, compartmentalized parts needed to be opened up into a single room, even if it meant shifting crucial I-beam supports. “We wanted to take this very old home and make it modern without compromising its essence—and have it filled with our personal accents,” says Frank.

While many of the objects and artworks might appear whimsical in nature , the couple insists they use everything in sight. That might mean even fishing through the bowl of the phrenology heads when one is trying to read the mood and expression of the other. The blue-and-white transferware in the kitchen is both decorative and practical. Giant pitchers, sinuous vases, and shallow urns function as much as sculpture as they do useful household items.

The couple are good hosts, not only because they are both so engaging, but also because the very interiors of their home are entertaining. “I do like an element of fantasy in design,” admits Frank, “in my house, certainly, and when I’m able, also in the homes of my clients. That element of fantasy is part of my own sense of humor.” Frank’s penchant for collecting and the way he displays what he and Libby own harkens to the honored tradition of “cabinets of curiosities,” those European assemblages of varied objects, often scientific in nature. 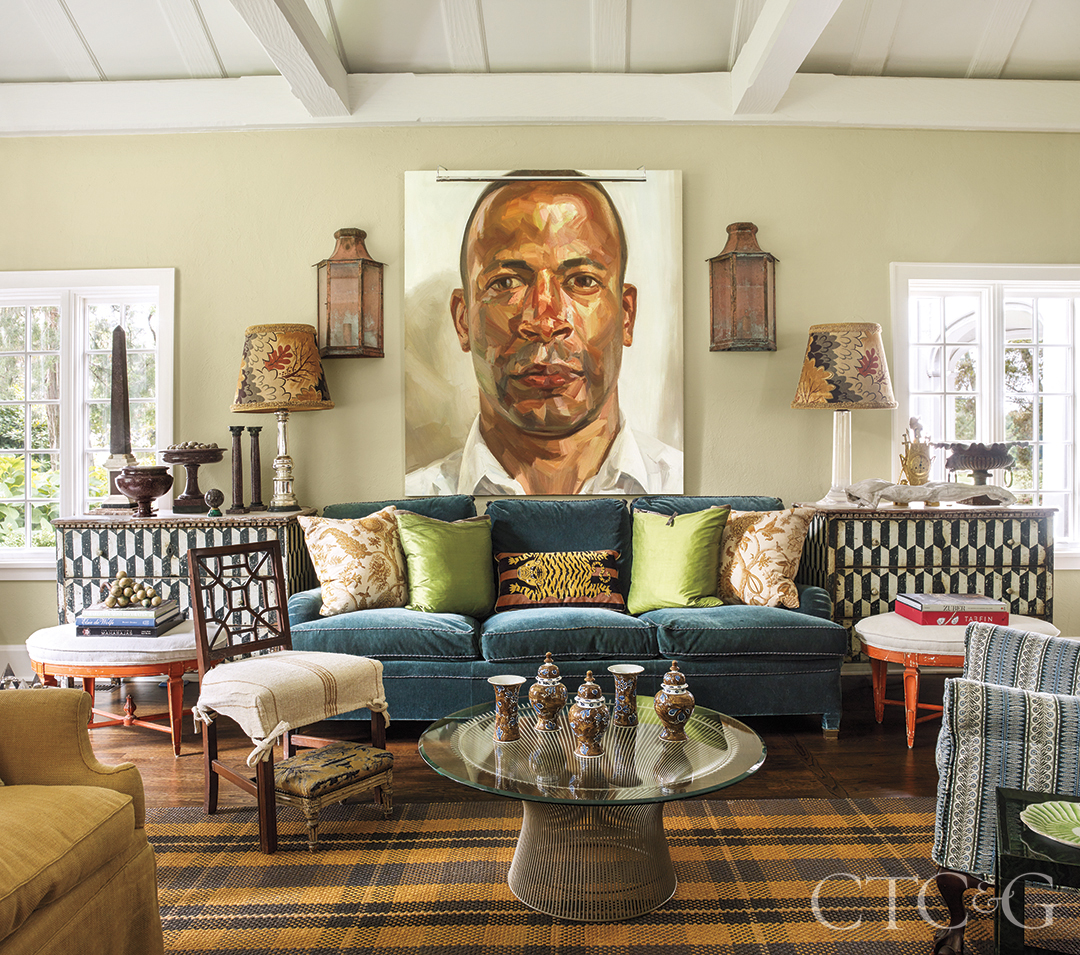 No surface in their house is static or monotonous. A glance in the living room reveals an enormous portrait of a biracial face. Frank shares how this work of art “has followed me to every home I’ve ever owned.” Along with the portrait comes the Rococo garden ornaments, Americana needlepoint creations, and cloisonné ware. Elsewhere, one can find such distinctive elements as a collection of judges’ gavels and a swag of vintage Fortuny fabric sweeping over a guest bed.

Although the rooms feel finished, it’s difficult to believe the couple is ever content with how everything is exactly positioned. “We love our house and are always glad to be home the moment we open the door,” says Frank, “but collectors never really stop collecting.”

The print version of this article appeared with the headline: Curiouser and Curiouser.
Subscribe to C&G