Color & Pattern in a Connecticut Home

A move from Manhattan meant a whole new palette for this family of four. 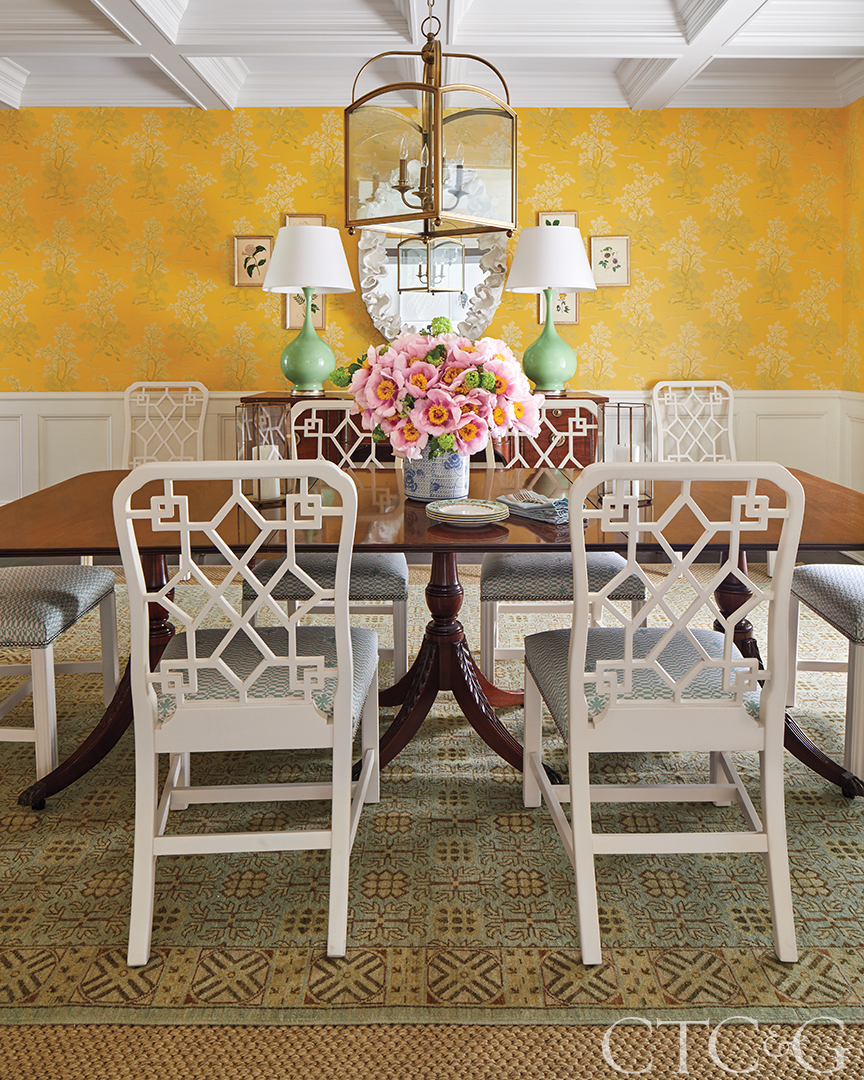 Few interior designers willingly admit to their weaknesses, but Stephanie Woodmansee is proud of hers. “I don’t do neutral well,” she states, “though I try. I’m happiest with colors in a room, and that’s why certain clients reach out to me.”

Woodmansee’s penchant for color is evident in the interiors she designed for a young family of four in New Canaan. When they moved from Manhattan to a spacious house within walking distance of downtown, they wanted a whole new palette. In an epically-scaled design process, Woodmansee, who heads her own Manhattan-based firm, Henry & Co Design (named for her poodle—“I report to him,” she says), presented her entire design scheme in one long sitting with the client. “It took a couple of months for me to prepare, but when I met with the client, now a close friend, everything connected visually,” says Woodmansee. “Everything she liked, I took and ran with.” 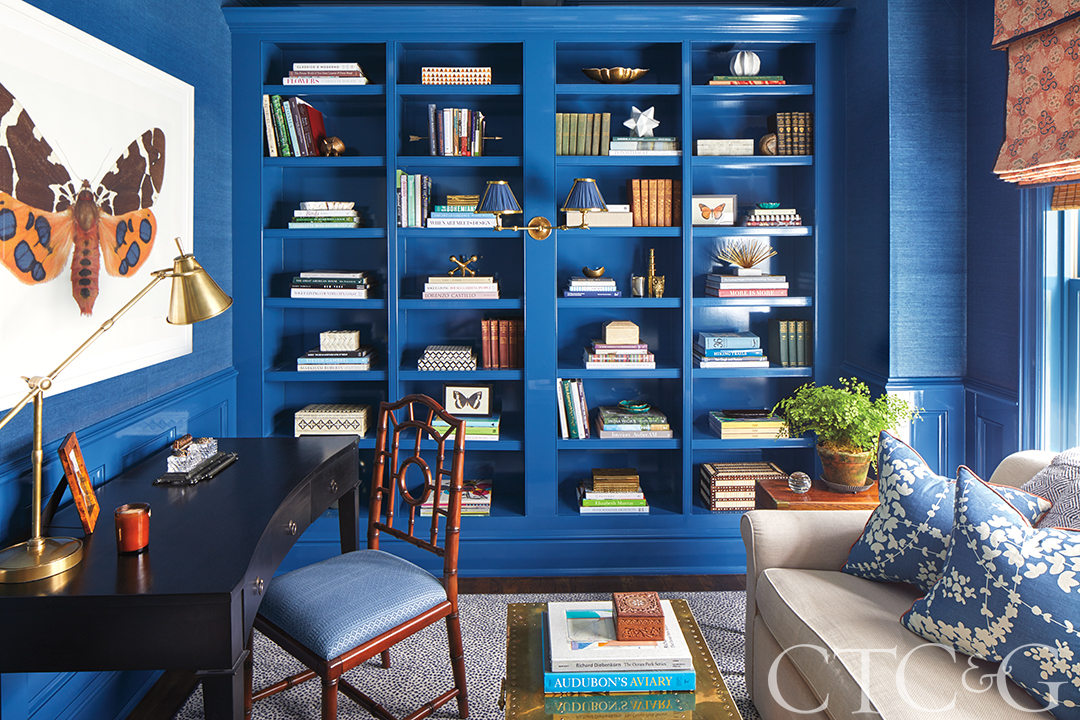 Of the many points of agreement resulting from that session was a mutual love of all things blue. “As soon as I realized her palette skewed blue, I made that color a connection throughout,” says Woodmansee. In some rooms, such as the library, blue prevails, notably on the walls as a grasscloth and a lacquered wall of built-in bookcases. “Particularly with dark colors, lacquering creates a beautiful patina and richness,” Woodmansee emphasizes.

Elsewhere in the home, blues and other hues reveal themselves as patterns. In the family room, for instance, Woodmansee chose a boldly articulated wallpaper depicting oversized blue medallions. “At first, the client was scared of printed paper with something so big,” she says, “but I convinced her that the pattern would draw people into the house, especially since the room is visible from the foyer.”

And, yet, in other rooms, color is decidedly more muted, though still referencing the home’s embrace of blue. Light blues appear on select furnishings in the living room, a space that is, at once, formal in appearance but wholly welcoming to all—most notably the couple’s two young children. Here, a pair of Schumacher Roman shades depicting the tree of life acts as the room’s visually animating force. “If you have one strong visual focal point in a room,” Woodmansee stresses, “it becomes a nice balance for all of the supporting ‘actors.’” 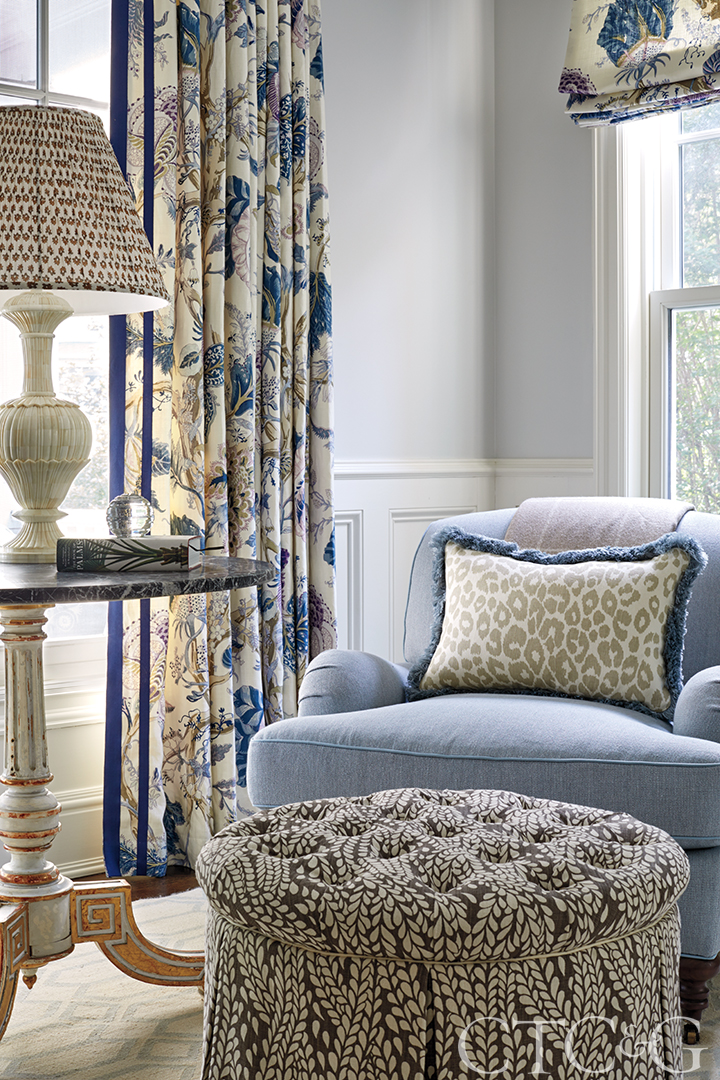 Woodmansee loves to play with patterns on patterns—on patterns. And yet, no room feels overly busy or cacophonous. “Multiple colors and patterns warm up spaces,” the designer insists. “Varying patterns in rooms make for a home that, overall, feels collected and natural.” Although the clients furnished their new home with new furnishings, they and Woodmansee were adamant, however, to always include something old in every room. “Even a single antique in a room delivers so much more character and patina to that space,” the designer explains.

While Woodmansee was responsible, ultimately, for helping choose everything from furnishings to artworks to accessories, she was careful not to create rooms that looked “decorated.” She insists, in every one of her projects, that the personality of the owners should be the defining décor. “I never want to walk into a room and feel that it has been decorated,” she explains. “I wanted the elements in these rooms to feel collected and curated by the family over time.” To help foster that look, however, Woodmansee picked up on some of the clients’ interests and hobbies, and attended to those by buying such things as books on jazz and cookbooks. “I tried to introduce small, fun nods that connect to the clients,” she says.

The print version of this article appeared with the headline: A Change of Hue.

This article appears in the February 2020 issue of CTC&G (Connecticut Cottages & Gardens).