A two bedroom apartment in an early-20th-century building gets an elegant makeover. 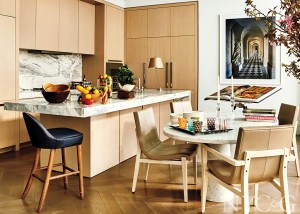 Apartment renovations are no walk in the park, so nothing’s more satisfying than the day the dust finally settles and it’s time to move in.

For most people, yes, but that’s not always the case. As decorator Alexander Doherty was putting the finishing touches on a globe-trotting client’s Manhattan pied-à-terre, he noticed that an early-20th-century building nearby was undergoing an overhaul. His curiosity piqued, he stopped in, toured an available unit on the third floor, and left ready to persuade his client to make the arguably rash decision to do a 180 and buy it. “I really wanted her to purchase the apartment,” recounts the self-taught British designer, who made his way to New York more than two decades ago and launched his business in 2007. “From a proportional and architectural point of view, the building is just a different caliber. It’s really elegantly done.” 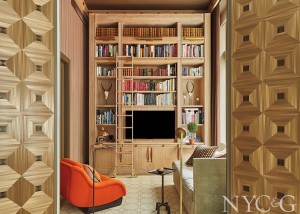 Much to his surprise, his client was on board, and Doherty got to work reimagining the scheme he had devised for her original, similarly sized two-bedroom, this time taking into consideration the new pad’s generously scaled windows and expansive 15-foot ceilings. Drawing its inspiration from SoHo’s Crosby Street Hotel, where the decorator and his client had their first meeting, the decor incorporates strong colors, plenty of texture, and a variety of natural materials. “It’s not over-the-top contemporary, but it’s definitely not fuddy-duddy either,” Doherty says. “We wanted it to be slightly quirky and unexpected.”

To make the most of the approximately 1,400-square-foot home, Doherty installed 10-foot-tall interior doors throughout to “play up the drama and volume of the ceiling height.” Additionally, he converted the second bedroom into a dazzling library, where visiting overnight guests are easily accommodated by a custom daybed upholstered in a Rogers & Goffigon fabric. “The apartment is a pied-à-terre, so less entertaining happens here,” says Doherty, “and there was no reason for the second bedroom to become a little-used no man’s land.” Oversize straw marquetry doors, custom made in Paris, open into the space, giving it a heady, yet not too bookish, air. 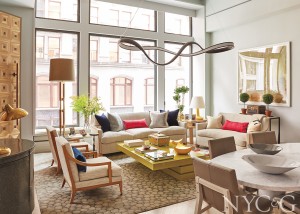 “All the rooms,” adds Doherty, “are strong in personality,” particularly the bold master bedroom, where Leora Armstrong’s oil on canvas Orange Field amps up shimmery tonalities of gray and silver, plus a ceiling and walls painted Benjamin Moore’s Thistle, a deeply saturated purple that creates “the feeling of a real cocoon.” Even in the entryway, a statement-making rich navy paint and luxurious velvet curtains provide an intimate welcome.

Although the apartment switch was surprisingly smooth, it was not without incident, and a few adjustments were inevitable. The living room rug, for example, had to be cut down and rebound, and the back of the daybed was shortened so it would not impede the view from the window. But these fixes were nothing for a client and decorator willing to throw caution to the wind and start from scratch. In the hands of Doherty, it’s entirely possible that things can be even better the second time around.

A print version of this article appeared with the headline: Take Two.