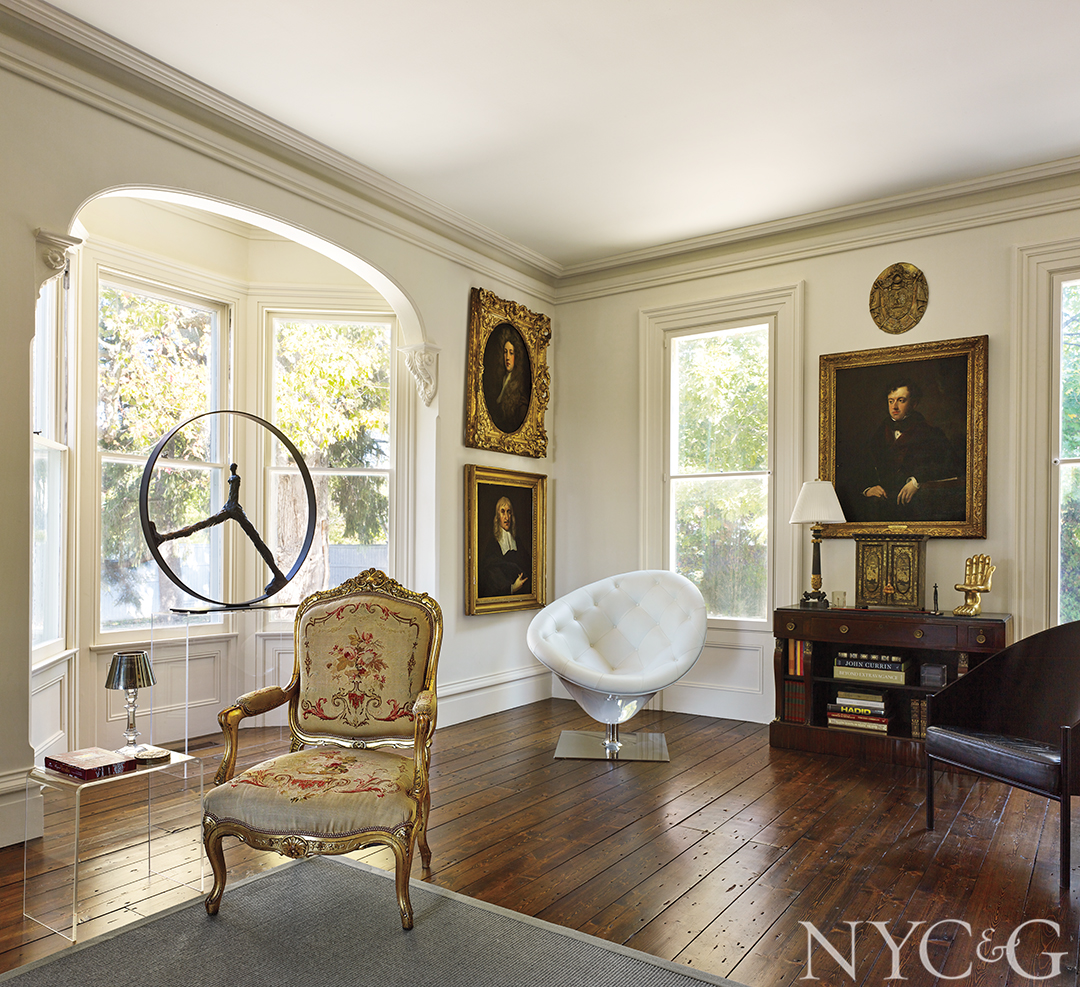 In the reception room, an Aubusson-covered bergère shares the floor with a contemporary leather chair by Philippe Starck for Driade. Photography by Peter Murdock.

Before they moved into a Victorian abode, Ramzi Abufaraj and Keith Nuss lived in a state-of-the-art modern box designed by noted architect Joel Sanders. Although they hadn’t been looking for the latter when they bought it, they put in an offer within 10 minutes of walking in the front door (Sweeping views of the Hudson River might have had something to do with it). And then, eight years later, someone walked into their house and made them an offer they couldn’t refuse. “We’ll only sell if you can find me something better,” Nuss recalls saying to Abufaraj at the time.

The couple had once been dinner guests at an 1878 house in nearby Claverack, the home of a wealthy apple farmer in bygone days. The 3,262-square-foot beauty on 49 sweeping acres was in need of a tasteful makeunder, and Abufaraj remembers saying: “One day we’ll live in this house, and we’ll transform it to what it should be.” That day came in 2016. 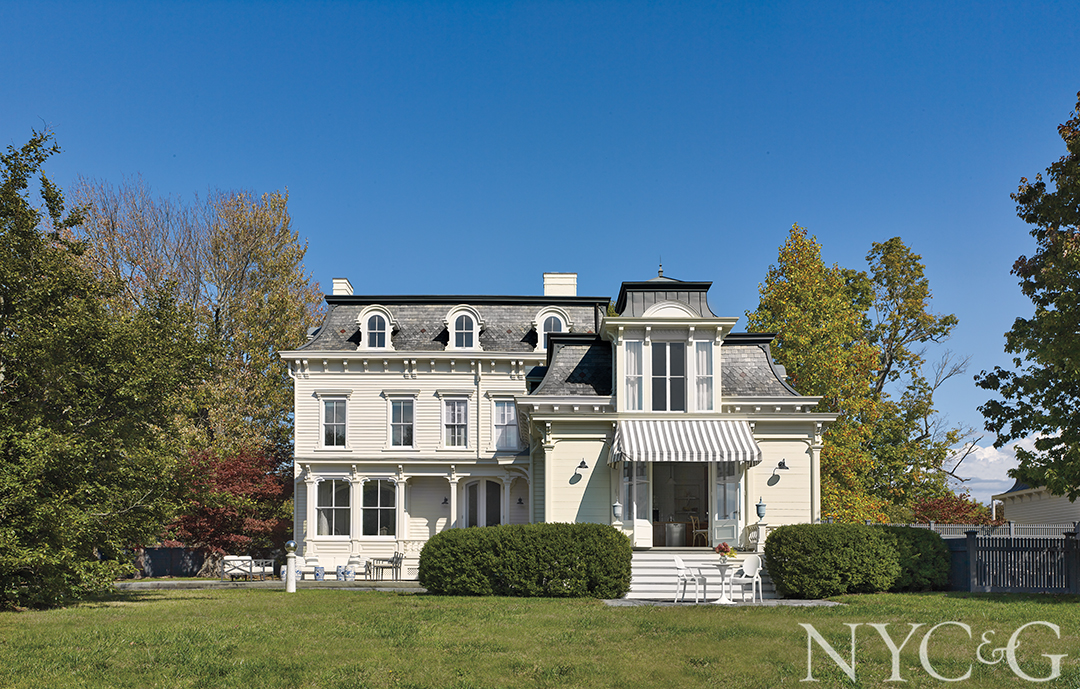 The back of the 1878 Second Empire–style home looks onto 49 acres of woodlands and distant views of the Hudson River and the Catskill Mountains. Photography by Peter Murdock

The original house and its outbuildings had been skillfully renovated during the preceding 18 years by art director Jeremiah Rusconi (James Ivory and Ismail Merchant were neighbors at one time, and Ivory still lives nearby). “It’s the most solid house I’ve ever been in,” says Abufaraj, who points out the signature Second Empire elements: the slate fish-scale mansard roof, the prominent dormers, the overwrought and oversize moldings and baseboards. These Napoleon III–style details are of a piece with the house’s location among rolling fields.

The property lies alongside a road that was once a major Hudson Valley thoroughfare, dotted with Vanderbilt mansions that “were built to impress,” Abufaraj says. But it was more about subtle boasting than showboating. When the couple bought the structure, which they’ve dubbed Villa RK, it was sporting some 13 hues of paint on the exterior alone, and “the living room was pistachio,” Abufaraj says with a slight shudder.  The house “didn’t want color,” hence its new cream-toned façade and interiors painted a chalky off-white from Farrow & Ball.

The decor suggests provenance and an inherited-through-the-ages vibe. “We love a good mix,” says Abufaraj, “as if things were passed down in the family. That’s why the house is filled with portraits.” Mostly acquired from auctions and vintage shops, these line the walls throughout and don’t feel at all strange, Abufaraj comments. “We know the subjects in the sense that we’ve made up stories and created possible histories for them.”

Counterbalancing the portraits are modern pieces by Philippe Starck and other contemporary designers, as well as vintage touches (Abufaraj trained as an architect and later became an agent for design stars such as Starck, Zaha Hadid, and Bruno Borrione; Nuss is a recently retired fashion executive). Upstairs, resplendent in an attic guest bedroom, sits a beautifully preserved gilt Empire sleigh bed that once belonged to Sir John Richardson, the late Picasso biographer and bon vivant. 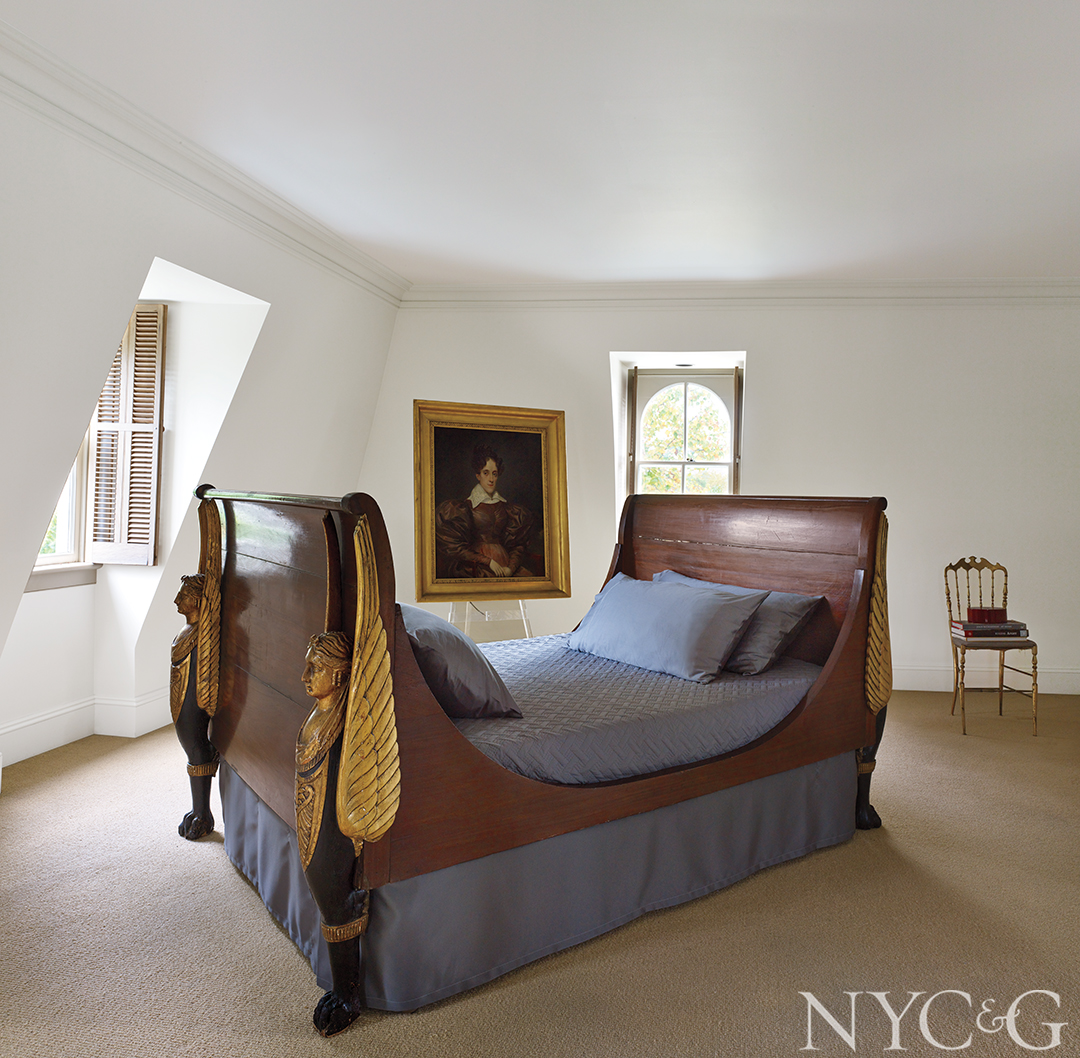 A few steps from the main house, the studio building contains a sleek gym and Abufaraj’s office, its backdrop a massive Coromandel screen that doubles as a room divider. A standard-issue window looks out on what Abufaraj calls the “million-dollar view. On most days, you can see the Catskills past the Hudson in the distance.”

The grounds on the property appear wild and rural, but are artfully maintained. The couple’s former dentist lives next door, and the two households have joined forces to position a sculpture amid a large field accessed by a path. “We call it the parterre, after a traditional French garden,” Abufaraj says. “It contrasts with our neighbor’s English garden, and I love the way the two work together. At Le Petit Trianon in Versailles, the north windows look over an English garden and the west windows look over a formal French parterre—and these clash at the point where they meet. In our case, we tried to create a synergy that works perfectly.” 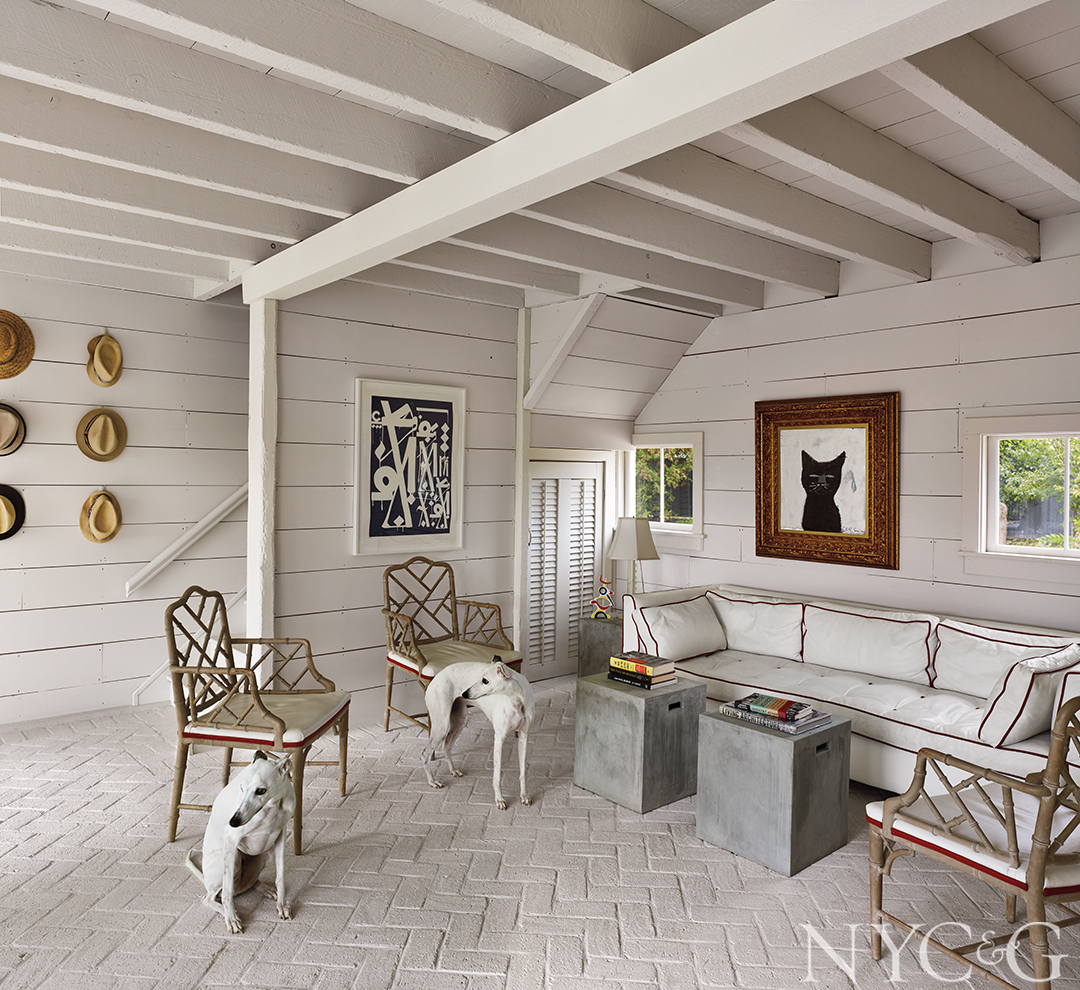 Whippets Louis and Julien hang out in the pool house, which opens onto a 75-meter lap pool. Photography by Peter Murdock.

Another outbuilding is planned as a cigar room for Abufaraj, who isn’t allowed to smoke in the house. The pool house doors open wide to a 75-metre plunge pool. Inside the pool house, the couple’s two graceful whippets are fascinated by a painting of a black cat that hangs above the space’s sofa. Although it’s not part of the main house, “the bedroom upstairs is probably the favorite guest room of all,” Abufaraj notes. “Friends who come to visit have their own entrance, and they can even go skinny-dipping after we go to sleep.”

The print version of this article appears with the headline: American Beauty.
Subscribe to C&G

This article appears in the October 2021 issue of NYC&G (New York Cottages & Gardens).