Cool Whites Begone: This Year's Biggest Trend in Kitchen Design is Heading into the Woods for a Warmer Shade of Pale 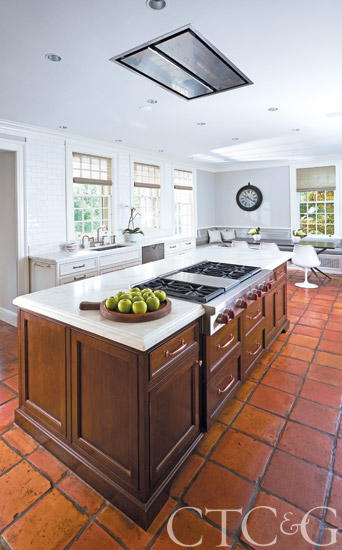 A place for everything and everything in its place was the mantra for this kitchen by Rose Adams of Rose Adams Cabinetry & Design, who loves the challenge of working with an older home. A total redesign of the existing space involved removing everything down to the existing framing, then adding new plumbing, appliances, lighting, windows, venting system, storage and more. “We kept the existing floor,” says Adams. “It’s in keeping with the house and runs in the downstairs mudroom. It’s timeless and looks amazing—a must-keep.”

To help brighten the space, three custom, double-hung windows were installed and a new lighting plan was devised, sans pendant lights. “We wanted the kitchen to speak for itself architecturally, and pendants would stop your eye,” notes Graham Veysey of Good Bones Design, who collaborated with Adams on the project. To avoid having a hood above the island blocking sight lines, Adams introduced a state-of-the-art, ceiling flush-mounted venting system that is controlled on the island.

Sporting copper hardware and a dark stain selected by Veysey and the homeowner, the custom island brings additional warmth to the space. “We were not looking to do an all-white kitchen,” says Adams. “The space feels more timeless with a stained island.”
A nod to modernism is visible in the corner banquette where durable materials, such as Kravet’s metallic vinyl, were selected to hold up to visits from the grandkids. “Our goal was to create a traditional look that’s also fresh,” says Veysey. “And that reflects the homeowner’s love of mid-century modern furniture.” 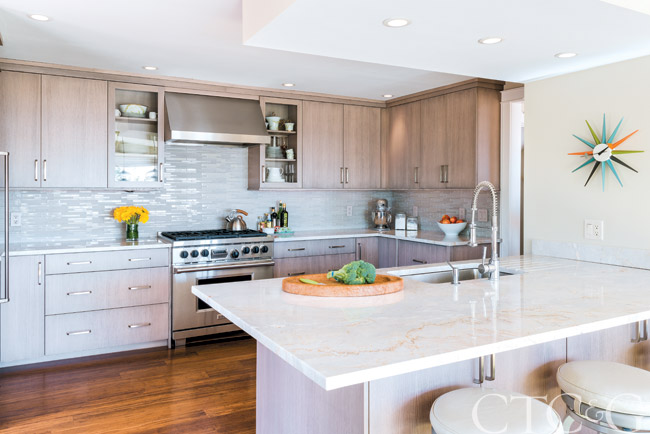 Family room and kitchen were united by removing the wall between the two and installing a waterfall glass-topped peninsula with seating on one side and cabinet storage on the other. This mirrors the center island, which is similarly topped with luminescent cast glass. A custom floating banquette by Audrey Sundheimer Interior Design in the windowed corner creates a casual dining area while leaving space for a bar with wine storage, a tall pantry and even a computer workstation with ridged-glass door inserts. “While the kitchen size remains similar to what it was prior to renovation, it feels far more spacious and has infinitely greater interest with a combination of dark, rift oak stained cabinetry and painted upper cabinets along the perimeter,” notes Santoro.

Not even Mother Nature could stop the kitchen renovations at this Shorehaven home. When the became inaccessible by car following Hurricane Sandy, the team found a great workaround. “We took tools and materials across the bridge by bicycle and golf cart,” says Joseph Najmy, founder of NuKitchens.

Priorities for this complete redesign included a better workflow, more counter space and a seating area for casual meals. “The starting point was getting the range and refrigerator out of the corners they originally occupied,” says Najmy. “This allowed us to create adequate work and storage space next to the range as a central way to unify the room.” A Sub-Zero all-refrigerator and an under-counter freezer were paneled to match the cabinetry and positioned directly opposite each other for ease of use and function. “By opening up the corners, the kitchen feels larger,” says Najmy.

Although the kitchen is an interior room, it opens onto the eat-in area and adjacent living space. “The choice of colors and materials make you feel like you’re on a beach walk every time you make a cup of tea,” says Najmy. Shimmery glass backsplash tile speaks to the home’s location on a peninsula surrounded by water. “The site and surroundings also inspired the use of rift cut oak in Silver Shore finish,” says Najmy. “This is a tight-grained wood that is highlighted by the hand-rubbed stain.”

Another remarkable detail is on the Quartzite countertop. “The drain-board is cut into the island countertop. It’s one of those small inspirations that really help the kitchen function well,” says Najmy. “We love the very pure nature of the rift cut oak, and our clients love the color palette and the relaxed tone of the space.” 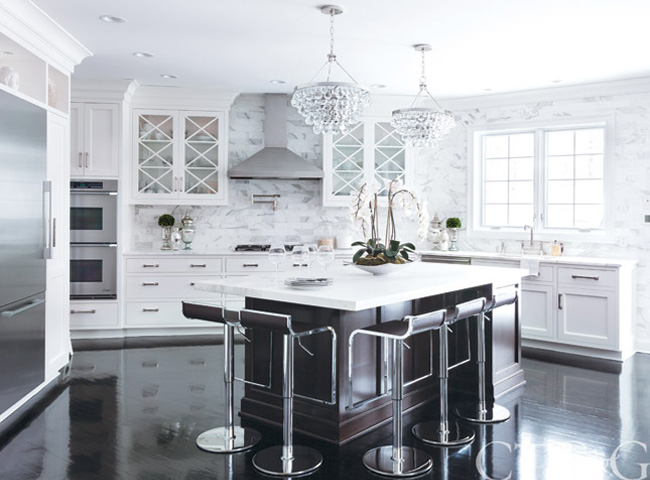 When her client requested a modern classic kitchen suitable for entertaining, Susan Glick of Susan Glick Interiors delivered a glamorous space with a large island, a functioning work triangle and improved flow throughout. “The kitchen was circa 1995, so we took it down to the studs, redesigned the layout of all the cabinetry and repositioned the windows,” says Glick. “We worked with a wonderful kitchen designer, Caryn Bortniker of CJB Designs, to reconfigure the space.” Odd angles and a center support beam created real design challenges. “But she brilliantly mastered the layout and removed so much of what was getting in the way of an updated design,” notes Glick.

Eye-catching lighting and an elegant mix of materials create a sophisticated ambiance. “The pair of Robert Abbey Bling chandeliers over the island played a large part. And we all wanted to use Calacutta marble as the countertop with white cabinetry and dark wood accents,” says Glick. “We carried the backsplash up the entire wall and wrapped it around their new large kitchen window and existing French doors.” Antique mirror and glass for the upper cabinet fronts help open up the space. “The X details on the upper cabinets were an integral part of the architectural design,” says Glick. “I carried antiqued mirror and polished nickel finishes throughout the hardware, fixtures and lighting.”

By mixing cabinetry materials, Glick found a balance between contrast and continuity. “We all loved adding dark walnut for the island base and the bar countertop,” says Glick. “I think the dark wood adds such a dramatic contrast to a white kitchen.”

It was more of an opening of borders than a land grab in the renovation of this Greenwich kitchen, where walls and cabinetry created a separation from the family room, restricting traffic flow and making the space feel confined. As part of a full-house renovation, the dated layout and furnishings had to go. “The cabinetry and paneling in the kitchen and family room were in a monochromatic and tired cherry wood finish, and elaborate moldings and door and window framing were out of sync with the client’s desire to lighten and contemporize the feeling of the house,” notes Deane, Inc. designer Gianna Santoro, who worked on the project closely with Douglas Lederman of Audrey Sundheimer Interior Design and Al-Jon Construction.

BROWSE MORE PHOTOS FROM THIS FEATURE IN THE FULL GALLERY