Artist Michele D’Ermo paints herself into a sweet little corner of East Hampton. 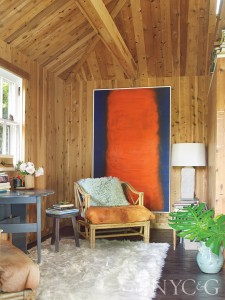 Expect the unexpected. As mottoes go, none could be more fitting for Michele D’Ermo, who spent her youth eating club sandwiches with Cher and swimming with Peter, Paul, and Mary at her father’s hotel, enjoyed a long career as a chiropractor for Broadway actors, and worked as an éminence grise for 1stdibs founder Michael Bruno before ultimately settling into a life of painting in the art studio at her East Hampton Village cottage, where a clawfoot bathtub is perfectly positioned . . . on the back porch.

Even as her milieus have changed, her passion and joie de vivre remain the same. “I have an edge and a lot of emotion,” she explains. “I’m Italian and French, so what can I say? Working with people you love and who love you is my personal golden rule.”

Her father, Dominique, a French Resistance fighter during WWII who later owned restaurants and hotels in Washington, D.C., “always had the feeling that the Germans are coming, and when I left New York on March 9, as the coronavirus crisis was mounting, I had that sense as well,” D’Ermo says. “Thank god I have this little spot to run to.”

This little spot is a charming, unassuming property with a one-bedroom, one-bath cottage and several small outbuildings, including a pool house and her art studio. She found the tiny gem on Easter Sunday 2003, after a day of house hunting. It was the last property she saw, and the most modest. “I walked in and said, ‘I’ll take it,’” recounts D’Ermo, who “found out that the talented Joe D’Urso designed and built the house. It’s different when a designer actually lives in a home, and I know when something is done well and has the right flow.”

The interiors boast D’Urso trademarks, such as open shelves in the kitchen, and her own tasteful, eclectic decor, including a mid-20th-century dining room set that belonged to her mother and an early prototype of a Jonathan Adler sofa. An impressive number of “outdoor rooms” on the small property are delineated by borders of “privet and ivy and boxwood, interspersed with roses and lavender,” she says. “They know how to look good and smell good.”

A trellised climbing rose graces the entry to her art studio, where she makes large abstract canvases of up to eight by 10 feet. Her preferred medium: oil sticks, which lie scattered across a table in small bins. These “giant crayons” (albeit expensive ones) give her striking, ethereal paintings a richly hued depth. “The central theme of my creative process is interweaving memory and imagination,” she explains. “Imagination alters memory, creating a work of art that is not connected to a specific time and place. This timelessness allows for nature to be evoked, not described.” 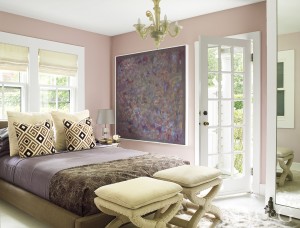 The East End’s natural beauty, especially the ocean, inspires her. “The horizon line plays a large force in my paintings,” she says, “so witnessing it every day on dog walks is a study in and of itself. I love to paint with the color blue, particularly ultramarine, which was originally ground from lapis lazuli into a powder in the 14th century.” Although she didn’t train formally as an artist, she honed her eye while growing up in the nation’s capital and spending time in the National Gallery of Art. “I don’t think you can make an artist,” she opines. “You are born an artist, and so I just dove right in. Art is much more about doing than talking.”

She began painting to focus and unwind after treating and healing patients all day long during her years as a chiropractor, a period of opening her heart to clients, which included Bruno. “I’m a very kumbaya sort of person,” D’Ermo reflects. “Michael said to me, ‘You know how to take situations and handle them, but it doesn’t feel like work.’” Instead of a quiet retirement, Bruno convinced D’Ermo to join him at 1stdibs, where they were soon traveling the globe in search of prized antiques and artifacts.

“I was used to treating sprained ankles for cast members of Evita,” she says with a laugh. “What did I know about this huge world?” A whole lot, it turns out. She stops to smell a David Austin rose in the backyard and recalls a few words of wisdom from her father: “Live well without the promise of tomorrow.”