Curled up on a nine-foot Dunbar sofa in her spacious, airy living room, photographer Andrea Stern contemplates her surroundings. Her three-bedroom apartment, in a landmark Upper West Side building with treetop views of Central Park, has recently been transformed into a tranquil haven that she shares with her son  and Ken DiPaola, a sculptor, plus a protective Labradoodle named Ranger. The very act of curling up on the sofa is somewhat new to Stern: In its previous incarnation, the apartment was a riot of color and pattern, a sort of Palm Beach–meets–David Hicks hybrid. While adventurous and fun, the rooms were anything but the oases of calm they are today. 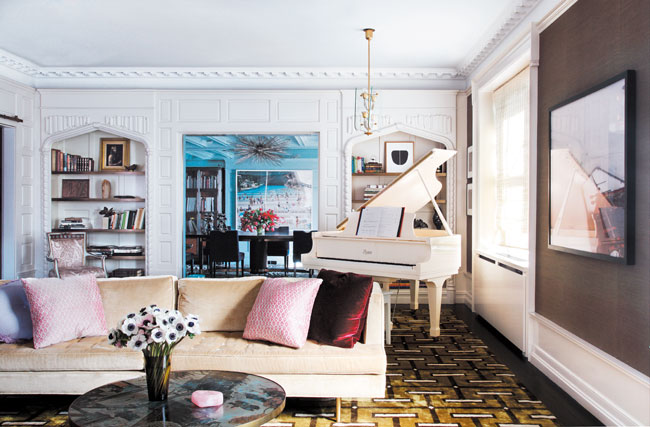 Previously the living and dining rooms “were completely unused. They were stage sets”

As Stern found her needs and lifestyle changing over the years, she decided on an overhaul. The living  and dining rooms, in particular, “were completely unused,” she says. “They were stage sets.” The final call for an update followed a flood in the apartment, which required the removal of a custom patterned rug. “That helped quite a bit,” recalls DiPaola. “It opened the door to how we could use the space differently.” Adds Stern, “We weren’t going to move out and renovate, though. The question was, How do we use the existing footprint and make it in our own image?” After an initial attempt at redoing the apartment themselves (“When we tried to remove certain elements, everything seemed to fall apart,” says DiPaola), the couple called decorator Darren Brown, who had assisted in the  implementation of the earlier design by another firm. “Darren has such an original vision, and we respect his creativity,” says Stern, who adds that she “warned Darren that this would be a collaborative project. I wanted a referee. Once we brought Darren in, we had someone to push us to the finish line. He knew the apartment well and knew us personally, and we knew his aesthetic.”

“I realized immediately that Andrea and Ken wanted the apartment to be less about color and making a statement and more about quiet comfort,” says Brown, who set out to “make the palette more subdued and richer in tone.” Brown also took note of Stern and DiPaola’s “wonderful collection of photography,  which I wanted to showcase. In some ways I wanted it to be more about the art than the furnishings.” In addition to pieces by such masters of the genre as Diane Arbus, the apartment serves as an informal backdrop  for a revolving exhibit of Stern’s own work, most recently a study of childhood identity development through group activity. 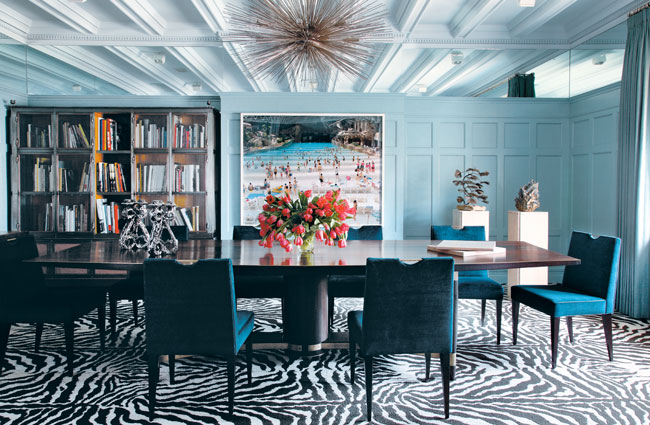 For Brown, revisiting the apartment and reinvigorating its design required a considerable amount of calculation and much deeper  thinking than he had originally anticipated. Thankfully, his clients gave him a refreshingly  relaxed timeline. “There was no sense of urgency,” he says, “so we took a slower pace. We had the time to find the perfect furniture and  to develop custom accessories and details.” Such  elements include bronze and leather bookshelves crafted by DiPaola in the living room, a stunning custom dining table, and lavender tortoise wallpaper in the master bedroom.  “Darren’s always suggesting something you would never think of for yourself,” says Stern. “Our bedroom wallpaper is a perfect example. Ken and Darren loved it, so I said, ‘Go for it!’”

In retrospect, Stern says, “things would have been much easier if it were a gut renovation—it’s much more complicated to do individual pieces of the puzzle. But we reinvented and recharacterized the space with great success.”  As for Brown, “Andrea and Ken finally feel their apartment is comfortable and suits where they are at in their lives right now, and that makes me very happy.”