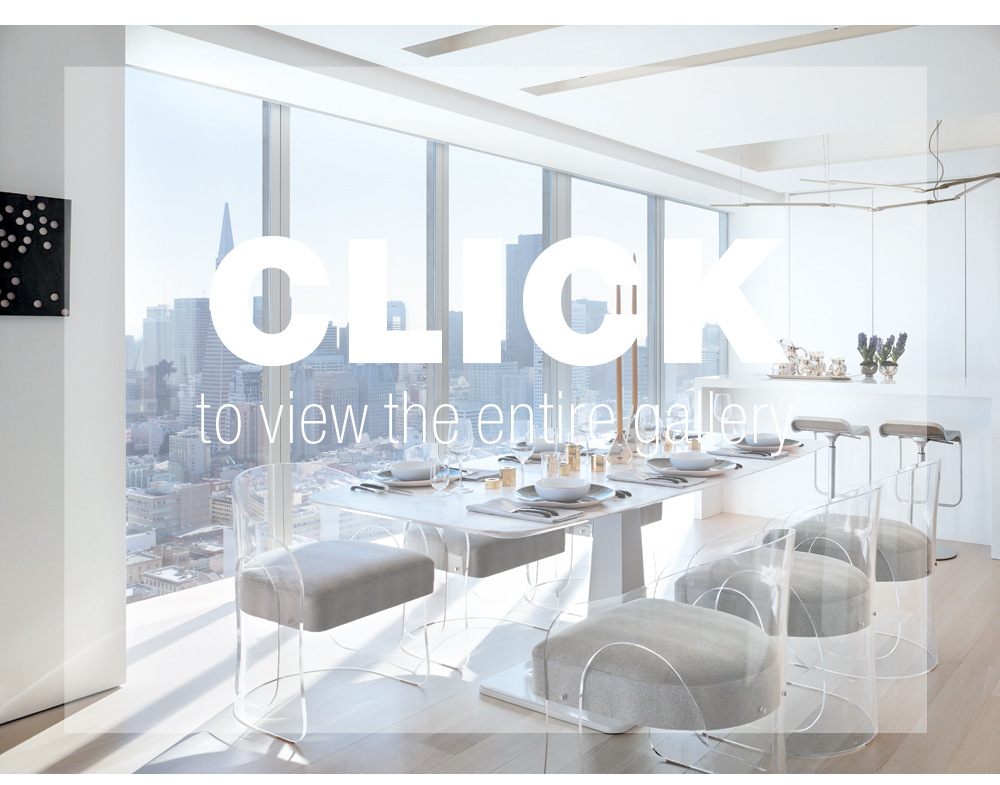 When you can see four bridges, 10 church spires, mountains, ocean and most of San Francisco’s architectural landmarks from your 17th-floor apartment in Russian Hill, the sky’s not the limit—it’s the starting point.

“This is a 1960s tower where all the exterior walls are floor-to-ceiling windows, so the owners wanted something indicative of its place,” says David Oldroyd, a principal at Orlando Diaz-Azcuy Design Associates. “They asked for a crisp, clean modernist box—something light, airy and silvery—to be seamless with the city, the sky and the moodiness of the fog.”

In collaboration with architect John Maniscalco, Oldroyd designed the interiors to maximize the 270-degree views. “You can see Coit Tower from bed and look through the den to see the Transamerica Building,” he notes. Yet the see-through vistas and open floor plan do not sacrifice privacy. Tricked out with mahogany panels, pocket doors and translucent glass panels, the internal walls evoke the shifting concealments and reveals of a puzzle box: The den and master suite can be closed off for intimacy, and the kitchen appliances disappear behind blind bifold doors, all fitted with minimalist hardware.

“The apartment feels completely different, depending on whether the doors are open or closed,” Oldroyd adds. “Being able to hide any clutter behind them keeps the space quiet and ethereal.” So does the serene palette of materials and colors. The bathrooms and kitchen island are clad in minimalist white Caesarstone. Bleached white oak plank floors with a gray finish transition to the dusty matte white of the raked limestone terrace.

“There are several shades of white in the apartment, to get the right balance of light and dark, crisp and cozy,” Oldroyd says of the paint choices. “The effect is to make the spaces look as clean as possible so that the views, the people and the objects are the center of attention.”

To counter the “hard, linear architecture” of the white rooms, Oldroyd chose “sensual, informal furnishings that float on legs to get as much light under them as I could.” His selections were iconic: a contemporary leather-upholstered Italian bed with a movable headboard; an Eva chair by Kerstin Horlin Holmquist; Arne Jacobsen’s Swan chairs in black leather; Vladimir Kagan chairs and a sofa in, respectively, silver-blue cashmere bouclé and taupe velvet. “We were going for something very elegant and boutique,” he explains, “mixing decades and regions of vintage design with my own contemporary custom pieces.”

In the paneled den, which “hovers like a wooden box in the white space,” Oldroyd channeled Hermès to customize an upholstered sectional, ottomans and end tables with leather pulls. In the dining room, the designer mounted a slab of marble on a lacquered pedestal and created Mod-era chairs made from single sheets of acrylic. “I didn’t want it to block the view,” he says of the dining suite, “so it just hovers there in space.”

As focal points in the living-dining space, Oldroyd incorporated two sculptural elements to transform less-than-desirable remnants of the building’s original structural layout. In the place of what was once a corner fireplace, the designer set a hearth with an integrated flat-screen TV at a rakish angle. “It’s a floating slab of bronze,” he says, “An homage to the monolith in 2001: A Space Odyssey.” And in a nod to the owners, who are in the restaurant industry, the designer placed a floor-to-ceiling glass wine cellar between the dining room and foyer.

Though the space is flooded with sunshine and the sparkle of the San Francisco skyline at night, Oldroyd aimed to amplify the effects, placing up-lights in channels in the floor and LED-illuminated ceiling coves in the dining room and kitchen with a brass lighting fixture over the island that resembles a constellation map. “The way the apartment looks changes throughout the day and all through the seasons,” Oldroyd says. “And at night, it always feels especially dramatic, like little slivers of city lights are shining through the house.”