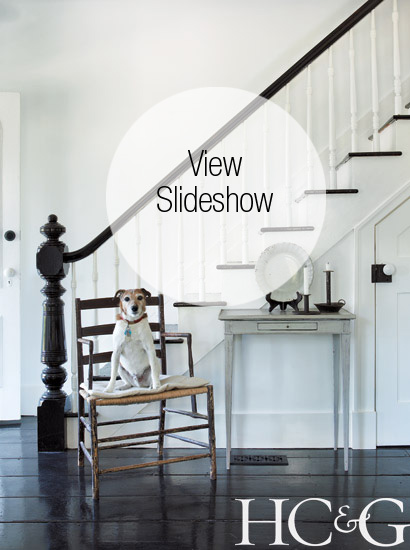 “The house wasn’t even on the market,” Bernt Heiberg says a bit sheepishly, “but we just went up and knocked on the front door and said we were interested in buying it.” The Oslo-born designer, half the firm of New York–based Heiberg Cummings, was instantly attracted to the small two-story Victorian with its cedar shakes and ornate porch. His partner in all things, William Cummings, who is as American as Colorado, California, and Georgia, where he was raised, was all for it the minute they saw the interior.

“I like houses that tell you a story,” says Heiberg, “and this one spoke to us right from the beginning.” For one thing, the structure had not been renovated beyond recognition over its century-plus years on a heavily shaded street. “Many of the original architectural details still existed,” Heiberg adds, including the carved marble fireplace in the dining room. The duo agreed that the modest gem was an ideal canvas for their signature style, a mix of Scandinavian neo-classicism and American country balanced with appealing restraint and a fresh, modern air.

The two blonds (“Bill looks more Norwegian than I do,” Heiberg says) launched their company in 1992, just two years after they met in Warsaw. “I was there as a photographer,” says Cummings, “documenting life in Eastern Europe after the collapse of the Berlin Wall, and Bernt was there on an Easter holiday.” The partners, who live and maintain a storefront office in the West Village, also run a sister studio in Norway and own a charming getaway in the South of France, featured in the December/January 2015 issue of NYC&G.

“We love Sag Harbor,” enthuses Heiberg, a far from stereotypically reserved Norseman. “It’s so beautiful. It’s right on the water, and there are a lot of designers and artists and architects living here, as well as a substantial year-round population, which we particularly like.” The men are also drawn to the town’s 300-year history, its little shops and lack of international boutiques and chain stores, and an authenticity that’s a remnant of its origins as a whaling port.

The house, thought to date from the late 1800s, was likely built as a worker’s cottage. The first thing the men did was update the electrical and HVAC systems and add a laundry/mudroom, all in the three-bedroom home’s basement. Then came the decision-making: what to keep and what to change. The large open living room was probably two rooms originally, and the designers initially thought of returning it to its original state. The openness and the proportions were so pleasing, however, that they decided to leave it as they found it. But the back of the house, where the kitchen stood, was another matter altogether.

“We tore down the back wall of the house and installed a steel-framed wall of windows that creates a modern sense of indoor/outdoor living,” says Heiberg. Next came a new kitchen, “our fantasy of what the original 19th-century room might have been.” They went traditional, with white subway tile, Carrara marble countertops, bluestone flooring, and white-painted custom wooden cabinetry.

Heiberg and Cummings like white, and most of the house is painted Benjamin Moore’s Bright White (the ceilings in maximally reflective high-gloss finish). “White gives us such a wonderful backdrop to work on,” says Heiberg, who especially loves it with high-contrast black, hence the black enamel paint on the original wide-plank pine floorboards and the tread and bannister details on the Victorian-era staircase.

“Our whole design style,” Heiberg instructs, “is predicated on the idea of letting a room breathe, of giving every object the space to tell its own story. We like less rather than more—a single plate and a candlestick on a clean-lined table, rather than a whole collection of candlesticks.” But as enamored as they were of the 19th-century design details, some things just had to go. “Most of the windows have original glass, which is wonderful. But some had leaded colored glass in every shade you can imagine, like the two tall windows next to the fireplace. They made the whole place feel like a church and totally blocked any visual access to the outdoors. So we took them out.”

The window treatments throughout the house represent a compromise between the heavy hanging draperies that would have graced a late-19th-century home and the preferences of a duo who like a lot of light. The pair settled on full-length drapes in white Pindler & Pindler linen, but lined the living and dining room panels with gray flannel. “That way,” Heiberg says, “on the coldest days, you can pull all the curtains shut against the weather and enjoy a fire from anywhere in the living room.

“When the breeze is blowing,” Heiberg continues, “the trees make a sound like secrets being whispered. I think this house is magical. The whole town is magical. We’ll be in Sag Harbor forever.”

A version of this article appeared in the June 2015 issue of Hamptons Cottages & Gardens with the headline: Victorian Charmer.

Tour a Modern Build on the North Fork

A Chic NYC Apartment With a Jewel-Toned Palette