A couple turns a Central Park West apartment into a New York pied-à-terre thats bright and relaxing. With help from Mascarenhas, the two created a natural setting with accents from Brazilian furniture emporium, Espasso and a palette of... 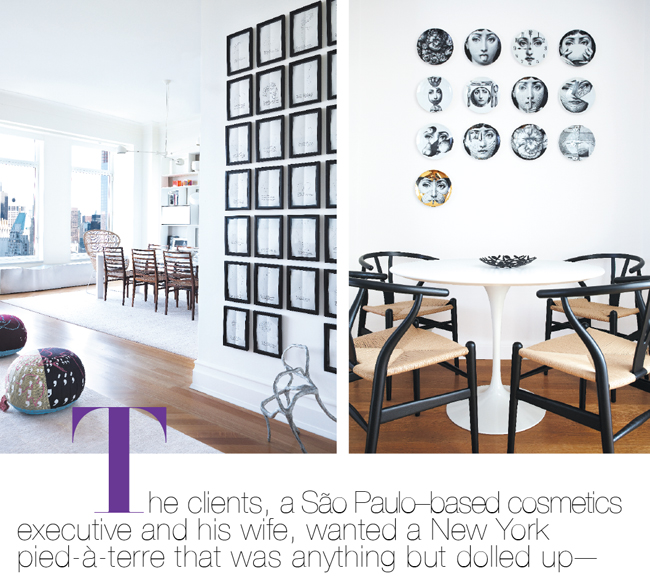 no high-gloss sheen, nothing done to the nines. A substantial challenge, given that their brand-new, 3,000-square-foot, three-bedroom apartment is located at 15 Central Park West, the much-buzzed-about, $950 million 2008 conversion of the Mayflower Hotel by Robert A. M. Stern. Glorious finishes and finely honed details are the hallmark of the quietly imposing, gleaming limestone towers that now constitute one of the most desirable addresses
in the world, with king-and-queen views of Manhattan both to the east, overlooking Central Park, and to the west, toward the Hudson River.

Enter their decorator, Cristiana Mascarenhas, whose 20-year-old interior design company, In Plus, has offices in both New York and her native Rio de Janeiro, where she spends five months a year. Charged with the task of making a sparkling floor-through in a top-of-the-line apartment tower look like something closer to a humble abode, she took an intentionally casual approach. “They wanted a bright, relaxing home,” she says. “They did not want a showoff-y place.”

Relaxed, confident, and stylish, with electric blue eyes and long, sweeping black hair, Mascarenhas says that her first order of business was getting her clients to remove an arched wall that divided the primary space into separate living and dining areas. “The wife didn’t want to,” Mascarenhas recalls. “She said, ‘We bought the apartment new! Why do you want to touch it?’ But then she realized she would be getting an even greater view of Central Park, and she had to let me do it!”

Despite the initial stumble, the clients proved to be knowledgeable, amenable, and collaborative throughout the process. “I always ask new clients to tell me at least two things about their taste in design, and then I know which direction to take,” says Mascarenhas. “They said that they like Minotti and B&B Italia—so I knew they wanted a modern, contemporary apartment.” Given her directive, Mascarenhas quickly settled on a Minotti sofa with low, elongated lines and soft contours and a sculptural steel Dip bench by Chris Howker from B&B Italia.

Her own designs, like the raised platform beds and side tables she created in the guest rooms for the couple’s two grown children, blend seamlessly with pieces from contemporary Brazilian furniture emporium Espasso, art by modern masters Ellsworth Kelly, Damien Hirst, Richard Serra, and Andy Warhol (whose A to Z alphabet, framed letter by letter, is one of five copies in existence), and works by such Brazilian artists as Jorge Maria Galvao, José Bento, and Marcia Grostein. (The latter’s photograph of a St. John the Evangelist statue with outstretched arms energizes the master bedroom.) Daniel Senise’s oversize painting of wood blocks against an aqua backdrop, hung in the living room above the B&B Italia sofa, “makes the owners think of a swimming pool,” says Mascarenhas. “Now they say they’re thrilled to have an apartment in Manhattan with a view and a pool!” 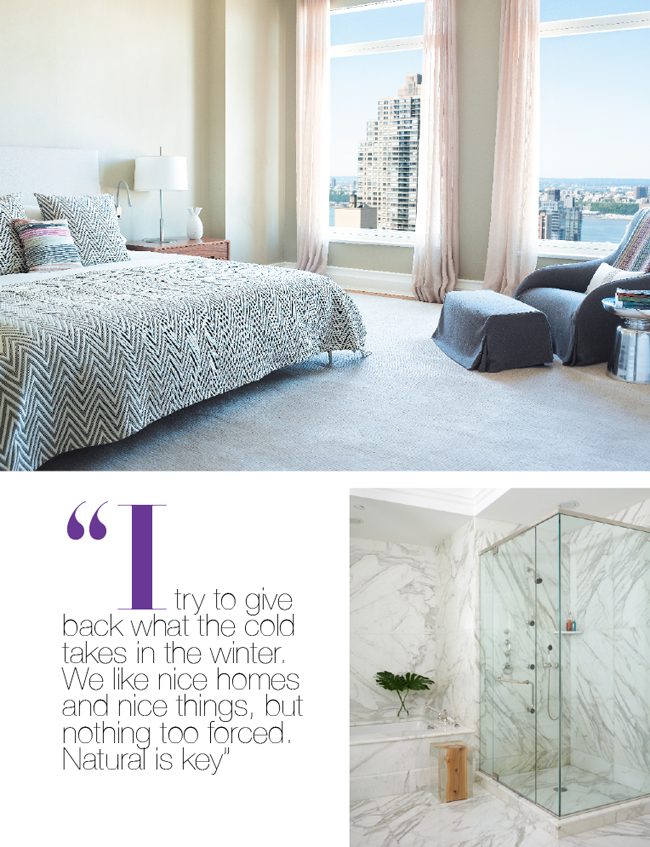 Polished oak floors and beige rugs in all the rooms unify the prevailing palette of earth tones and metallics, devised to meet the aesthetic requirements of the man of the house, who is color blind. “For him, some colors don’t read well—too many tones together appears dirty to him,” says Mascarenhas. “He and his wife had to decide what he feels good looking at.” Aubergine, Mediterranean blue, gold, and silver accent the airy white rooms, which also take on a substantial green glow from verdant Central Park during warmer months.

Where color was by necessity limited, texture adds sensory pleasure throughout: There are soft suede walls in every bedroom, nubby white fabrics on upholstery pieces, a slab concrete console in the entry hall, and warm wood accessories. Even a green marble powder room original to the construction was redone in straw grass.

“Brazilians are used to being warm,” says Mascarenhas, who wears gold bracelets, a yellow quartz ring, and a crystal pendant carved into the shape of her native country—all gifts from her clients. “In their New York homes, I try to give back to them what the cold takes in the winter. We like nice homes and nice things, but nothing too forced. Natural is key.”

Despite 15 Central Park West’s pedigree (fellow residents include Sting and Denzel Washington), the couple was drawn to the building for fairly pragmatic reasons, says Mascarenhas: “The services in the building and the location are great. In São Paulo, they live in a classical, conservative home in a nice neighborhood, far away from the center of the city. Here, they can walk everywhere. But they love it so much that once they’re here, they never want to go out!”