When a friend of Eddie Lee and Edward Wendt was looking for a new place to summer on the island, the duo decided to create a light-filled airy home perfect for a family setting. The team used driftwood and mirrors to dress the walls.

Everyone knows it’s great to have friends, but it’s especially handy when you’re building a house and your bff is an accomplished interior designer. Wes Powell, a Manhattan-based lawyer, had been summering in the Pines, one of Fire Island’s most beautiful communities, since 1995, and decided just two years ago that it was time to look for a place of his own. Accompanying him on his search was Eddie Lee, an interior designer whom he describes as his best friend since their freshman year together at Vanderbilt some 25 years ago. 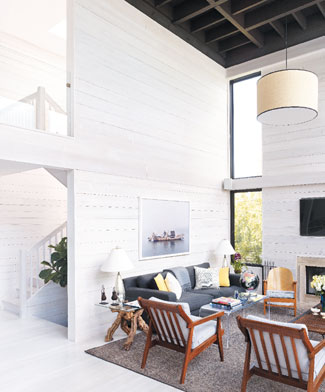 When Powell’s real estate agent, Doreen Katen, showed him a place that was owned by her contractor husband, Bill, who had been renting it out every year, Powell immediately decided to buy the property, tear down the existing dwelling, and build a new one more in keeping with his dreams. “I just wanted a cedar and glass box,” he says. And that’s what he got—from Lee and architect Edward Wendt, another close friend who had also been the architect for Powell’s Manhattan apartment, collaborating with Lee, who did the interiors.

“I’ve done several projects with Eddie,” says Wendt, confirming that the three men were in basic agreement about the house from the start. “It was a no-brainer,” adds Powell. “I gave them a broad outline—simple symmetrical structure, two stories, and a double-height dining and living space—and I let them go with it.”

Powell bought the property in the summer of 2010, broke ground that October, and was living in the new house by Memorial Day 2011, a certain record given the layers of red tape that need to be untangled when it comes to new construction on Fire Island. But with Bill Katen as the contractor—who already had an approved plan in place—the team was able to skirt many of the potholes that can delay beach projects. “We were given the footprint,” explains Wendt, “and we had to work within the parameters. But sometimes with tight restrictions you end up with something better.” 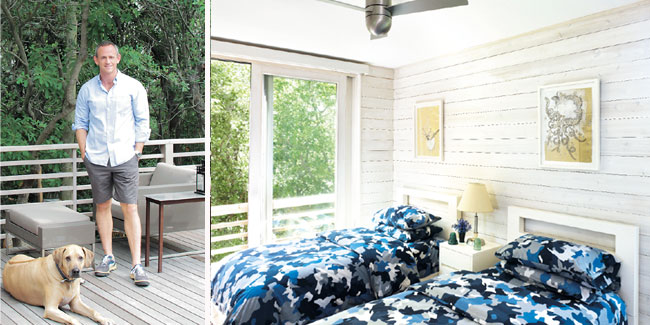 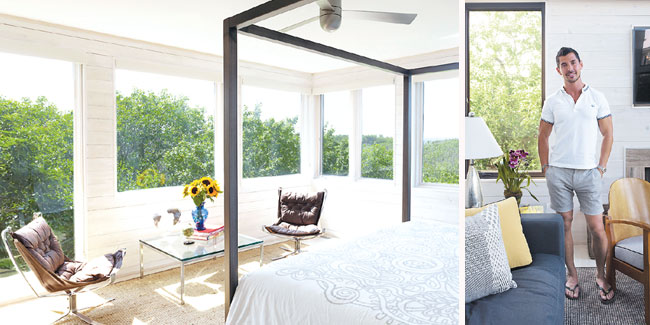 When it came to the decor, Lee applied many of the design lessons he learned from his mentor, the late New York decorator Greg Jordan, with whom he worked for 10 years. “Everything I know about design, I learned from Greg,” says Lee. “A project should be like painting the portrait of a client, and accessories should always feel collected over time—a natural accumulation.” He and Powell “wanted a driftwood-y look,” and so all the walls were stained with white Minwax, to which Lee added a small amount of Benjamin Moore’s Decorator White for more opacity. In the soaring living/dining area, the woodburning fireplace on one wall is flanked by two dark gray Montauk sofas. (“Charcoal gives the space a masculine vibe,” he says.) Most of the pieces in the furniture grouping are vintage, from the two 1930s English Art Deco chairs on one side of the fireplace to the ’70s Plexiglas tables beside one of the sofas.

At the opposite end of the room, a scene-setting, antique iron dining table from Lillian August is paired with classic Scandinavian-inspired wood dining chairs from Room & Board. The no-nonsense galley kitchen is fitted with cabinets from Ikea and includes, at Powell’s insistence, two dishwashers and a separate ice machine (he loves to cook and entertain). A clever touch: A mirrored backsplash that makes the cabinets seem to float. “I have a thing for mirrors,” says Lee, who also hung them above the outdoor dining table and on the rooftop’s outdoor shower for similarly dramatic appeal. 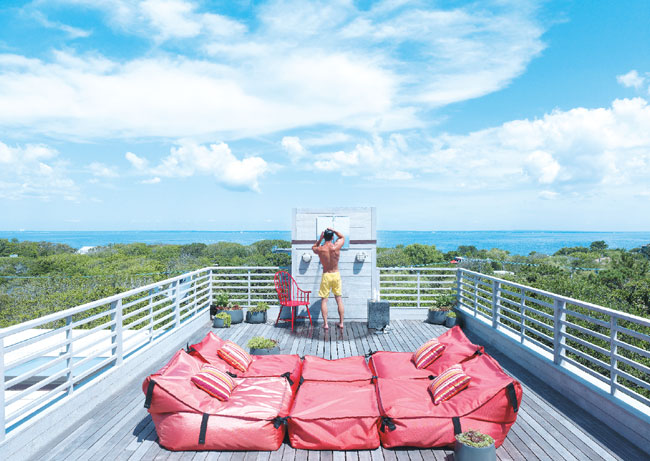 “I have a thing for mirrors,” says Lee, who hung them above the outdoor dining table and on the rooftop’s outdoor shower

The back half of the house contains four bedrooms, each with its own bath, with two bedrooms downstairs and two upstairs, where the master bedroom is located, with picture windows framing treetop views of Great South Bay. This room, outfitted with an architectural steel-framed bed and vintage chrome and leather side chairs, also includes a dog bed for Powell’s Rhodesian Ridgeback, Samson.  “I wanted a place that kids and dogs could play in,” says Powell, whose impeccable planning was prophetic. Since building the house, he has entered into a new relationship with a partner who has a three-year-old son—making his light-filled glass house on Fire Island the perfect setting for a
new family.