Donna and Yale Fergang called on Mendelson to help rediscover their 3,300-square-foot space. Mendelson filled their home with an array of patterns, textures, styles, and carefully conceived details to keep the couple and their twin daughters delighted. 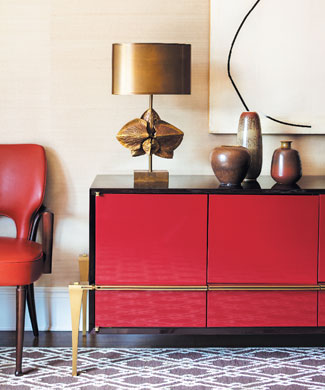 When it comes to design, decorator Gideon Mendelson
takes his cues, in part, from the world of cinema. He studied architecture and film at Columbia University before earning a degree at the New York School of Interior Design and launching his Manhattan-based firm a decade ago. His favorite takeaway from those years? The late critic Roger Ebert’s statement, “Every great film should seem new every time you see it.”

Mendelson finds that sentiment just as true of well-designed rooms. “We watch movies we love over and over because the really good ones have so many layers that they keep us coming back for more,” he says. “It’s the same when you design a room. There should be enough going on that every time you enter there’s something new to discover.” 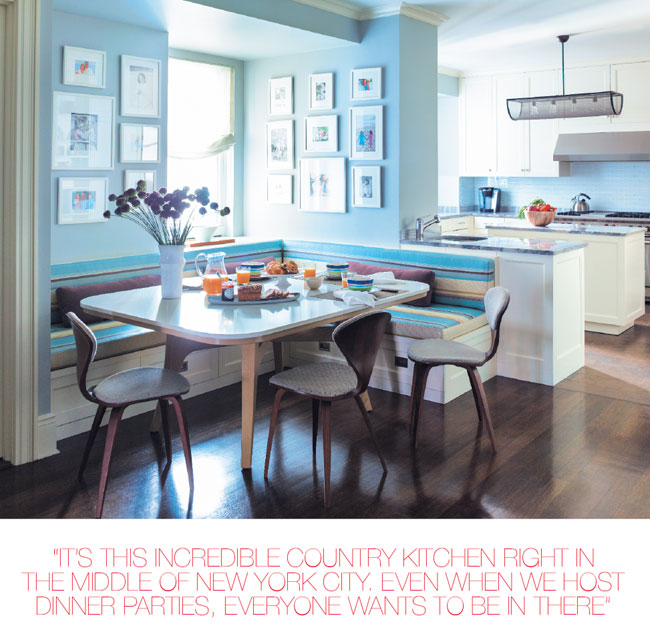 To prove his point, Mendelson filled the 3,300-square-foot Upper East Side home of his clients, Donna and Yale Fergang, with enough patterns, textures, styles, and carefully conceived details to keep the couple and their twin daughters delighted for years to come. “I introduced lots of upholstery, paired with mid-century modern and sculptural items,” says Mendelson, describing how, in the living room of the apartment, a mohair sofa seems cozier paired with a high-gloss coffee table, and polished Venetian plaster walls are juxtaposed with a contemporary silk-and-wool rug. “It’s all about contrast,” he says. “Putting a mid-century table next to a mid-century sofa just isn’t as challenging.”

Although sophisticated interiors ranked high on the homeowners’ wish list, comfort was the first word they mentioned when they met Mendelson. “The apartment’s previous owner was an art collector who essentially used it as a gallery space, and the odd-shaped rooms were entirely unsuitable for a family,” says Donna Fergang.

To address this issue, Mendelson transformed the family room—with its large sectional, wrapped in luxurious viscose cotton—into the prime gathering place. “It’s this small hub in the middle of everything where we love to sit and read with our girls before bedtime,” says Fergang. The calm blue walls are echoed in the nearby kitchen, where five cramped spaces were opened up to create a combination cooking and dining area that most apartment dwellers would envy. “It’s this incredible country kitchen right in the middle of New York City,” she says. “Even when we host big dinner parties, everyone wants to be in there.” 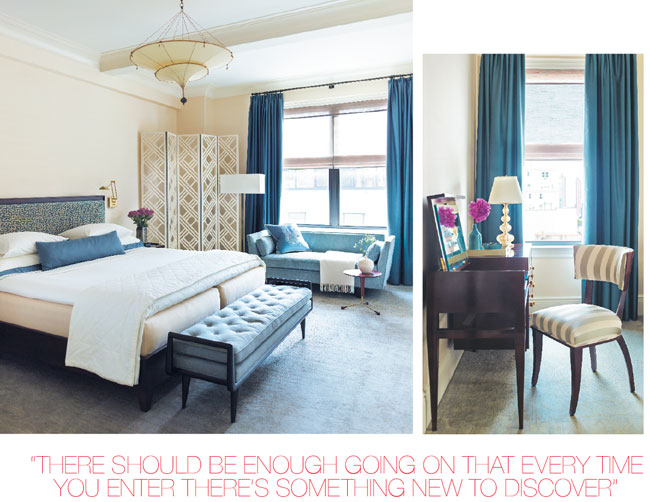 In the formal dining room, there are now two seating areas, so the Fergangs can enjoy an intimate meal with another couple or push the tables together to accommodate a party of ten. The blood orange hue (which appears sparingly in the otherwise neutral living room) is unapologetically strong in this setting. “They don’t use this room every day,” says Mendelson, “so the vibrant color works.” He deftly paired the modern Scandinavian-style chairs with a traditional paisley linen on the back. And the grass-cloth wall covering sets off the red lacquered credenza, reinforcing the designer’s rule of “never putting glossy next to glossy.”

Beyond knowing when to mix and when not to match, Mendelson meticulously designs rooms frame by frame, always mindful of where the eye will go, and what it will see. (Just like a good film director, it turns out.) “It’s a challenge to keep the eye moving and interested,” he says. “The ways we create certain moments can affect how we view our homes. I feel responsible for every one of those moments.”