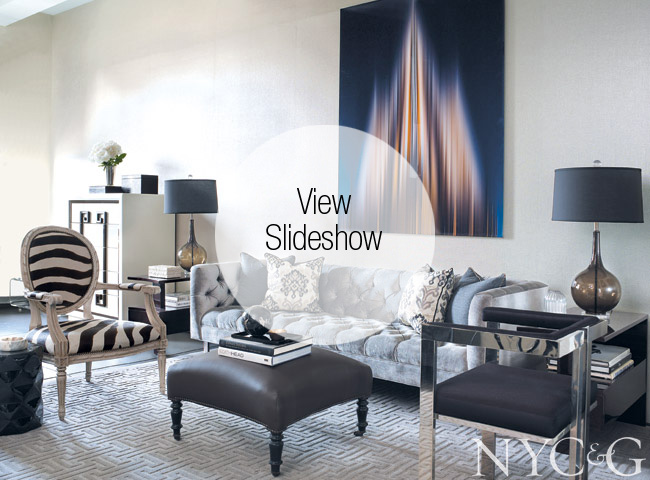 Bret Rudy, an HIV specialist who is the vice chair of pediatrics at New York University School of Medicine, has little time in his busy schedule to think about decorating, so choosing wall coverings and lighting fixtures was the last thing on his mind when it came to reinventing the look of his Chelsea apartment. Little more than a crash pad, the 620-square-foot studio was bare-bones to the core, with stark white walls, scant furnishings, and just a few pieces of carefully chosen artwork. “I had been there five years,” recalls Rudy, who was fully aware of the space’s potential as a stylish urban lair. When he was ready to take the plunge, he enlisted his friend Greg Shano, a decorator, to make it over. “I asked Greg to push me out of my comfort zone—I needed to have something to come home to.”

From the get-go, Shano knew that size would impact the design scheme. “The apartment is small, but you can do great things with small spaces,” says the decorator, who carved out separate living and sleeping quarters by installing a large area rug that defines the “living room” and a statement-making bed that signifies where the “bedroom” begins. Shano’s biggest concern? Making the place seem homey. “Everything looked very clinical.” (Rudy is a doctor, after all.) But rather than douse the studio in bright hues, Shano capitalized on the subtle tones of gray in an armchair and Rudy’s art collection, as well as the apartment’s good bones—it has airy, high ceilings—and finished kitchen.

“I wanted to dress it up like a gray flannel suit,” says Shano, a former fashion designer with a background in both men’s and women’s wear. “Bret doesn’t spend that much time at home, so it was important to turn the apartment into a place where he could completely unwind.” Furnishings with a slight curve—like bowed end tables and an Art Deco–style bureau—bring nuance and personality to the otherwise boxy space. To add a bit of gloss and texture to the subdued palette, the decorator incorporated pieces with lacquered finishes and a polished Phillip Jeffries white linen wall covering. Matching chandeliers provide more glam, shimmery complements to the handsome Stark carpet underfoot.

Further evidence of Shano’s tailored aesthetic is apparent in the Edward Ferrell + Lewis Mittman bed. Framed in a chocolate-brown Jerry Pair leather, its headboard forms a barrier of sorts with the living area and helps delineate the space. In the entryway, Shano maximized the square footage by building a small bench into the wall.

Just a few judicious changes, and “suddenly, the apartment has been transformed into the most comfortable environment,” Rudy enthuses, praising Shano’s handiwork. “I love going home to it every night.”

A version of this article appeared in the May 2015 issue of New York Cottages & Gardens with the headline: Singular Sensation.