Decorator Mark Zeff Makes Over an El Dorado Apartment for a Very Special Client: His Sister 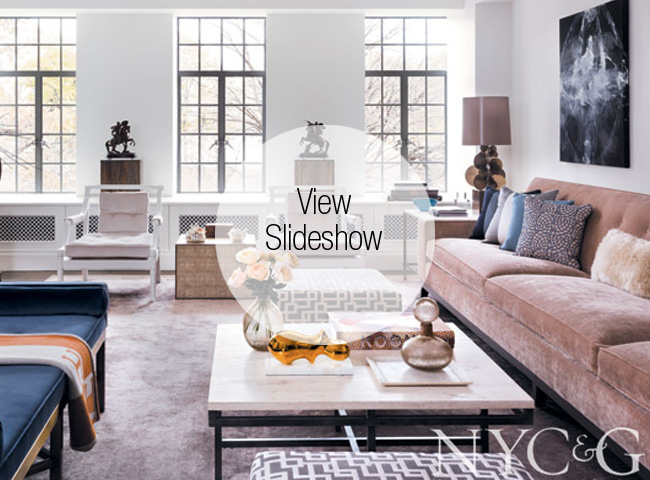 Mark Zeff and his little sister, Frances Katzen, didn’t play house together as children in their native South Africa and, later, Australia, but they’ve done so as adults in New York—to an extent.

When Katzen and her husband purchased a three-bedroom Central Park West apartment last spring, she kept things in the family and hired Zeff, a Manhattan-based interior and furniture designer, to take on the decor, furnishings, and reconfiguration of the floor plan. The work commenced while Katzen was pregnant with her first child—the goal being that the rebirth of the apartment in the historic El Dorado might coincide with the birth of her daughter.

“I’ll admit I had a bit of a panic attack in my eighth month, when I went with Mark’s idea to put up a wall and eliminate the window in the dining room,” recalls Katzen, a top real-estate broker at Douglas Elliman. “I love light and windows, and the thought of taking away crucial natural light was scary!” But by erecting that wall, Zeff also created a new maid’s room, simultaneously incorporating the old maid’s quarters into a much more expansive kitchen, which now includes a large island, eating nook, and “all the modern amenities I need,” his sister adds. To lend extra airiness to the space, Zeff installed casement windows from England that match those on the exterior of the landmarked Emery Roth building.

It was Zeff’s main structural change—although he also widened the hallway leading to the bedrooms. To compensate for the loss of light in the dining room, he clad a wall in antique mirror, which reflects treetop views of Central Park from the living room. “When you enter the apartment and walk into the dining room, the space really gleams,” he says.

Zeff references the building’s casements even in the foyer, originally a dark, enclosed, and rather formal entryway. Now the opened-up space faces gridded “walls” of metal and glass in the living and dining rooms. “Fran keeps the doors open all the time,” Zeff says, “so it’s light and airy throughout.”

Furnishing the apartment involved lots of compromise and a fair amount of give and take—like many siblings, Katzen and Zeff each covet what the other has. “I had been collecting stuff, some of which was slated for my own house, and keeping it in a warehouse,” recalls Zeff. “But Fran remembered much of what was there and lusted after it, including a sideboard for the dining room, a Corbusier table whose top I’d covered with a mirror, and a pair of 1940s French chairs we saw together at an antiques dealer’s shop in the Hamptons.”

Many of the larger furniture pieces, however, have been custom designed by Zeff. “I rarely buy stuff anymore,” he says. “I prefer to design furniture because you can make it fit both the space and the client’s personality. But I do occasionally buy vintage pieces and mix them with my own designs.” Among the most arresting items in the deep living room are a 17-foot-long sofa designed by Zeff and an indigo-blue daybed. Throughout the room and elsewhere in the apartment, Zeff has left his stamp further in the form of beautifully rendered shagreen-covered occasional tables.

“We had a ball playing our grown-up version of house,” Katzen recalls of the design process, “pushing texture, color, dimensions, and proportions, and being unabashed about the results. As a broker, I see so many apartments that are just menageries of stuff, and I wanted my home to be different. I didn’t want it to seem too fluffy and pretentious.”

“In some ways, decorating with my little sister was easier than with other clients,” Zeff says, “though she’s not a pushover, by any means. I might be the older brother, but when she wanted something, she was clear about it. This project has only brought us closer together.”

A version of this article appeared in the March 2015 issue of New York Cottages & Gardens with the headline: All In The Family.