After settling on a 14th-floor, 3,400-square-foot apartment in New York City, an Ohio couple's recent transition meant a gut renovation to their new abode. 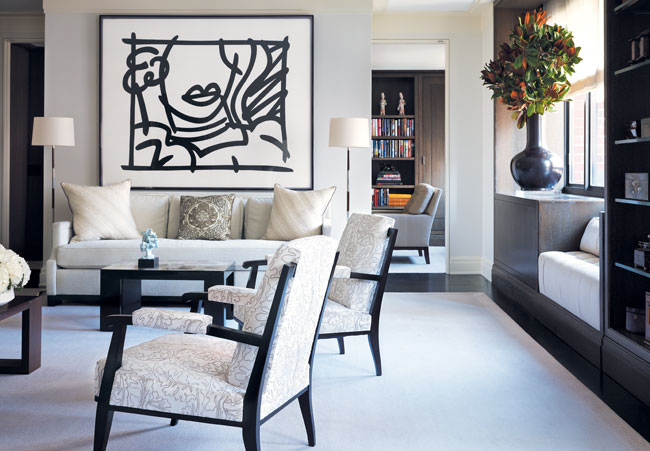 Neutral Territory
In the living room, a Tom Wesselmann painting hangs above a custom George V sofa from Holly Hunt. The armchairs, by Jonas Upholstery, are covered in an embroidered velvet from Dessin Fournir.

New York City, now more populous than ever, has no shortage of new residents, from Russia to India to Azerbaijan to Ohio. Yes, even Ohio, to which decorator Michael Rosenberg can attest, as he has recently completed work on a project for a Cincinnati couple who put down roots in Manhattan to be near their business interests and a weekend home in the Berkshires.

After settling on a 14th-floor, 3,400-square-foot apartment in a 1986 high-rise on the Upper East Side, they called on Rosenberg to reconfigure a “terrible” space—originally two apartments, “but only in the sense that the walls between the two units had been taken down, with everything on one side a mirror image of the other,” the designer says. A gut renovation was required to create a three-bedroom layout that flows effortlessly and provides ample space for entertaining.

Fine Lines
Decorator Michael Rosenberg designed the walnut and stainless-steel table in the dining room (left); the chairs and banquette are covered in a taupe cotton-linen from Holly Hunt. The landscape painting is by Fernand Quignon. The tub and fixtures in the master bath (right) are from AF New York.  The streamlined kitchen (middle) features custom cerused oak cabinets from St. Charles of New York. The frosted-glass fruit bowl is from Lalique.

As for the decor, Rosenberg adds, “The clients asked for a home that would suit a New York lifestyle for them. They stressed that they wanted it to be calm. They wanted it light and tailored, luxurious and comfortable, and neutral enough to accommodate their art.” That meant bridging the traditional—much of their collection consists of significant figural paintings—with the contemporary lifestyle they hoped to achieve.

Rosenberg and his design partner, Leonard Kowalski, began by rearranging the rooms, allowing for a joint dining/living room and a semi-open library. They added crown moldings that are “more pared down, more Deco,” says Rosenberg, and installed a wall of cerused oak casework that serves more than one function. (Removable window seats, for instance, prevent the owners’ young grandchildren from accessing the two Juliet balconies.) 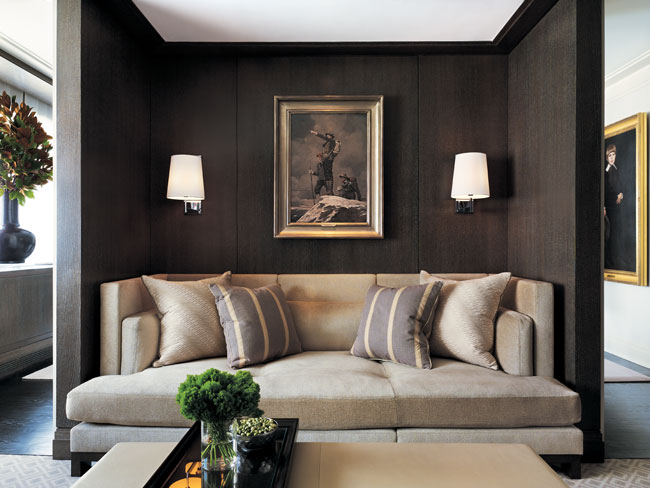 Cozy Nook
A custom daybed from Holly Hunt fits neatly into a nook in the library; the pillows are covered in an ivory silk from Fortuny and a striped leather and linen fabric from Lee Jofa. A pair of sconces from Holly Hunt and a Norman Rockwell painting hang above.

“The millwork also gave me a chance to cover up the air-conditioning unit and provide a server for the dining room,” says Rosenberg, who rubbed pigment into the cerused oak to give greater depth and movement to the wood and to tie it to the creamy walls. “We call the palette ‘neutral with color,’” he says, “because there are so many tones.” 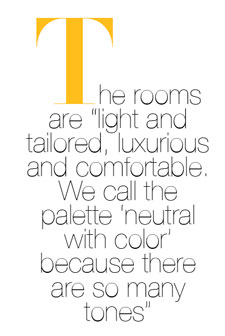 The furniture selection started with a Holly Hunt sofa the client had requested, a custom walnut coffee table, and other refined pieces such as a pair of armchairs by Jonas Upholstery and round Dennis Miller end tables in rosewood with burnished bronze legs. The designers and clients also added some contemporary art “to shake the place up a little,” says Rosenberg. A graphic Tom Wesselmann painting now hangs above the sofa, and a black-and-white Richard Serra abstract contrasts nicely with an Elizabeth Nourse portrait in a heavy gilt frame. Hints of gold and silver tie the art collection to the furniture visually.

But despite all the special finishes and carefully curated objects and artworks, nothing is ever too fussy—even in the pristine-looking dining room. “It’s not just for show or formal dinner parties,” says Rosenberg. “Our clients eat breakfast here, and even work on their laptops.”