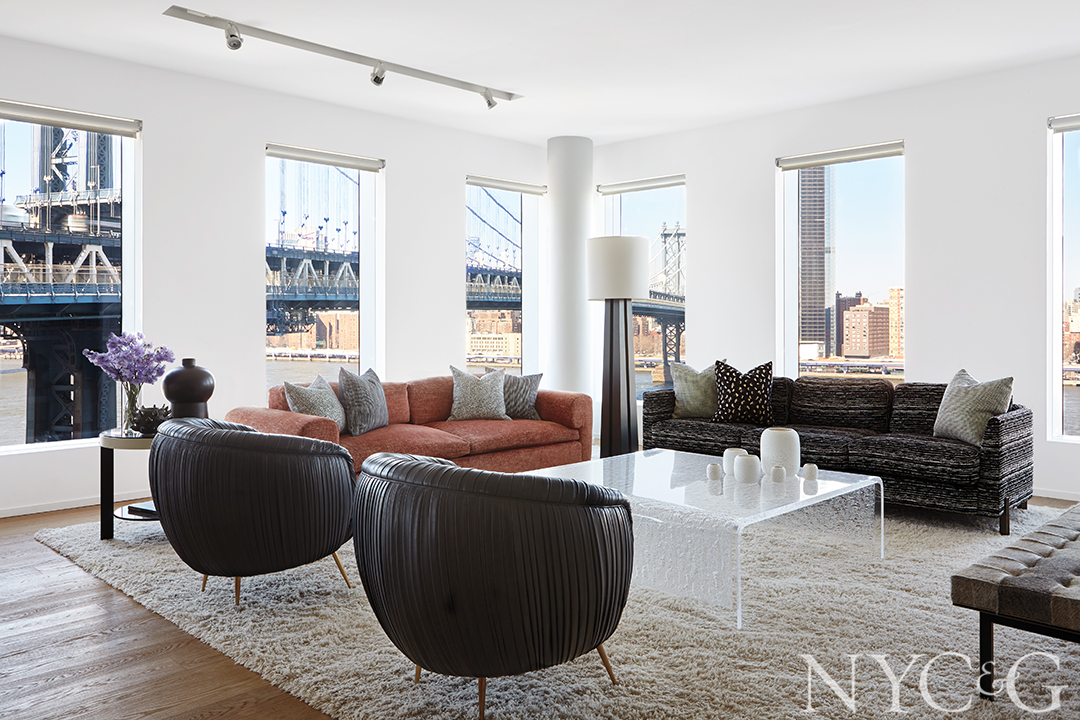 Color, but not too much color. Pattern, but not an overwhelming amount. The formula sounds simple enough, but striking the right balance in a home requires a thoughtful exercise in restraint. A big proponent of both pattern and color, Manhattan-based decorator Philip Gorrivan had to refrain from going overboard while working on a 6,000-square-foot four-bedroom in Dumbo’s One John Street, a condo erected within bustling Brooklyn Bridge Park in 2016. Because of the sweeping vistas of Manhattan and the East River “and the fact that there’s so much going on outside this apartment,” he notes, “it didn’t need to be as bold as some other places might need to be.”

So, instead of splashing paint all over, Gorrivan chose to leave the walls white and focus his energy on pulling together a provocative mix of “layered furnishings that tell a story and provide a shock of color in each space.” To wit: A salmon sofa from EJ Victor energizes the living room, shades of purple fig punctuate the master bedroom (from the Frette bedding to the seating to the rug), and a Mitchell Gold + Bob Williams sectional in a teal velvet keeps things fun and youthful in the family room. “I see a lot of gray,” Gorrivan explains, “and it seems like most people who have super-contemporary residences tend to upholster everything in neutral fabrics. I wanted to get away from that and prove how you can have color in a space like this.” 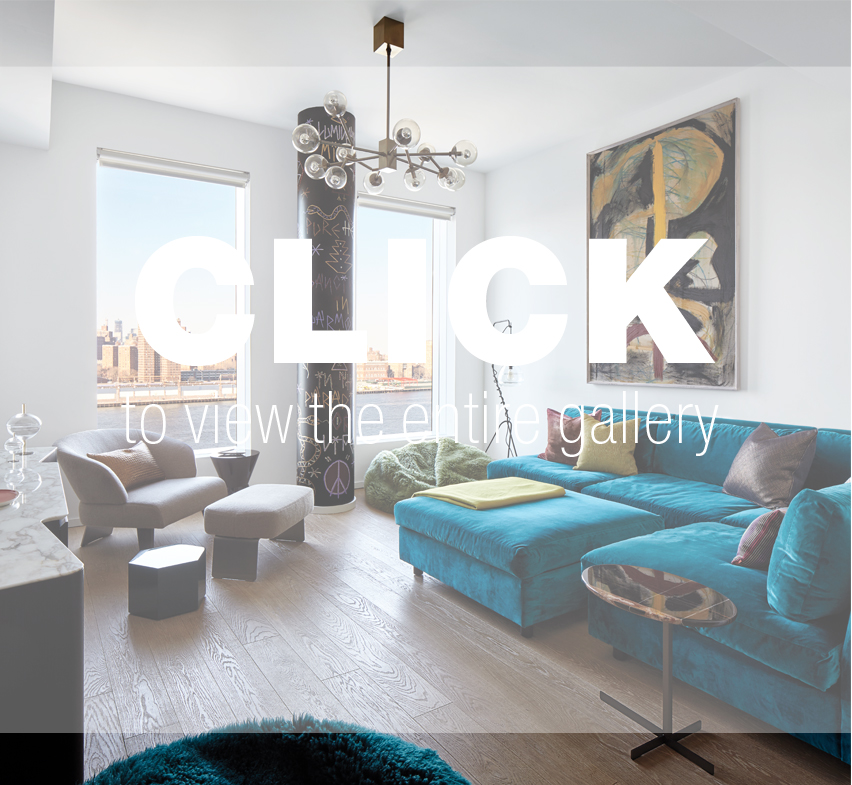 As for pattern, Gorrivan has used it sparingly—in the form of a striped fabric on the living room’s Baker sofa, a subtle Groundworks diagonal stripe on the dining chairs, and his own camo-inspired wallpaper for Holland & Sherry in the powder room. “I love wall coverings, but they’re hard to install in an open-plan apartment like this, so I decided to create some drama in the bath,” he says. “Small spaces like these are often overlooked.” The homeowners, a couple with two teenage boys, were fully on board with Gorrivan’s vibrant vision, having moved from a traditional setting on the Upper East Side to shake things up and start anew in Brooklyn. (They brought virtually nothing with them, save for a few decorative pieces and their art collection.)

“This was a wonderful opportunity to do something completely different,” the decorator recounts. “We were able to design for the space, as opposed to making things work from their previous place that may not have actually been the right fit.” The wife, a design lover, would even tag along with Gorrivan while he “shopped the old-fashioned way,” visiting showrooms to test out furniture and workrooms to pore over upholstery fabrics up close. “She loves this stuff as much as I do and would joke about wanting to be my assistant! We laughed a lot, and hopefully the fact that we had fun shows in the decor.”

A version of this article appeared in the October 2019 issue of NYC&G (New York Cottages & Gardens) with the headline: A Fresh Start.