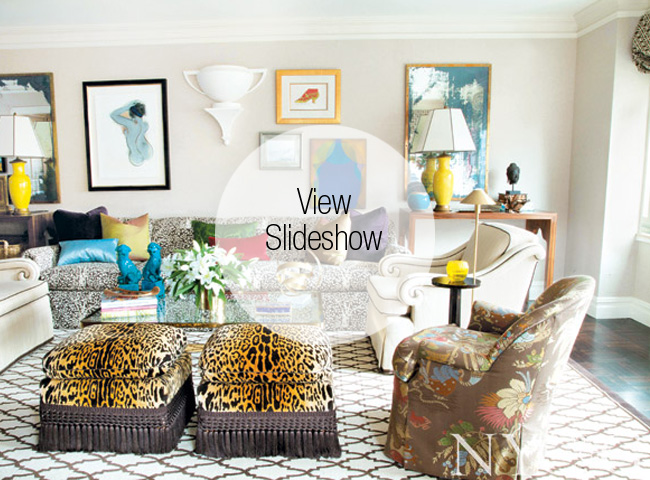 When you've lived in your Upper East Side apartment for three decades and your husband of 13 years (who moved in when you got married) is 6'6", it doesn’t really matter how big your place is: It could always be a little bit bigger.

So when the 600-square-foot studio next to Ronnie Nagler’s spacious two-bedroom apartment in the Phoenix went on the market in 2010, she and her husband, Stewart, bought it, then turned the entire space into a master suite—with an extra-long bed. But things didn’t stop there. A total rethink (and extensive redesign) of the entire apartment, now totaling around 2,000 square feet, came next.

Stewart, who passed away in 2012, had only two years to enjoy the home. But his memory lives on, especially through the artwork the couple collected during the course of envisioning their new, larger apartment. “We were never into art—never,” says Nagler. “Couldn’t care less about it. All of a sudden, thanks to Robert, we started to get crazy with it. We started to enjoy art-shopping together.”

Robert is decorator Robert Passal, who carefully grilled Nagler about her expectations for the apartment. (He sends all his clients a 25-item personality questionnaire, including standard asks such as “Favorite color?,” as well as more evocative queries like “Sailboat or cruise ship?,” “Mac or PC?,” and “Jeans or trousers?”) Based on her responses, Passal quickly realized that she was going to be a designer’s dream.

“Ronnie’s filled with personality,” he says, “and she wanted the place to be fun and colorful. So I told her we couldn’t do it without art. And that didn’t mean hanging posters on the wall.” Passal started by introducing the couple to the eccentric canvases of the artist Hunt Slonem, and his clients took to Slonem’s work, buying richly textured paintings of bright birds and butterflies, a countess with all-knowing eyes, and a portrait of Abraham Lincoln. These enliven the space throughout and set the tone for the apartment’s underlying design scheme: a decidedly upscale, yet resolutely tongue-in-cheek mix of colors, prints, and textures.

Walls in the main hallway are lacquered in a root beer hue, while a subtle Arabic pattern in the living room’s Oscar de la Renta rug is picked up in the gently curving lines of a console (one of many custom pieces Passal designed for the project). The smallest powder room has an extraordinarily detailed plaster-relief ceiling, and ribbon is used as a playful accent everywhere: lampshades, throw pillows and seat cushions, even ceiling molding. (Now retired, Nagler worked for many years at her grandfather’s ribbon and trim company.)

Though the project was almost a complete re-do, Passal didn’t dispense with everything Nagler previously owned, but brought new life to some of her favorite existing pieces instead, including an oversize cabinet in the living room that the late decorator Michael de Santis had made for Nagler 45 years ago. Passal sent it off to Two Worlds Arts, where it was transformed from dated blue and white into an utterly chic, brilliant red chinoiserie masterpiece. Passal also retained a Larry Rivers painting of Fred Astaire and Ginger Rogers dancing and a Karl Springer dining table, and updated Nagler’s ottomans with a Scalamandré leopard print. And after Nagler told him she was a fan of David Hicks, Passal had her sofa re-covered in a Billy Baldwin fabric frequently used by the British designer.

If eye-catching eclecticism is the name of the game in the apartment—and it is—then the master bedroom works its charms more subtly. Gentler hues of cream and sea green pervade the airy retreat; the adjacent master bath (converted from the studio’s kitchen) is a relaxing zone, with two large closets and a generously sized dressing room that are the height of luxury and old-fashioned charm.

Despite his considerable achievements in Nagler’s home, Passal wasn’t her first pick for the job. “When Ronnie initially called me about the project,” Passal recalls with a smile, “she started by saying, ‘Listen, don’t be offended, but I called Mario Buatta first, and he was busy.’” Passal didn’t take offense, and his client is thrilled. “I wanted something different,” Nagler says, “and that’s what I got.” Though the apartment was designed for her and her husband, she takes comfort in it. “It was decorated for us, but now, I live here. And I enjoy it. No . . . I love it.”

A version of this article appeared in the March 2015 issue of New York Cottages & Gardens with the headline: Mix Master.