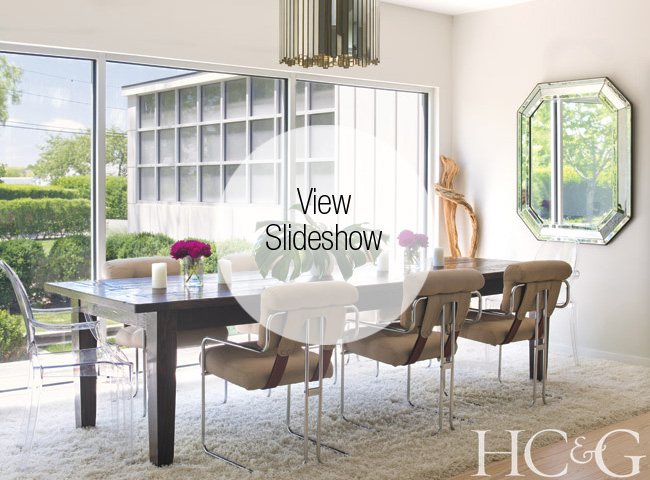 As a trained chef and owner of the Tribeca restaurant Mulberry & Vine, Michelle Gauthier sees a lot of the kitchen. But since opening the restaurant three years ago, she has found it increasingly difficult to spend time in her own kitchen at her Sagaponack home. “I don’t escape here as often as I’d like to,” she says of her East End abode, “but the time I do spend here has me in the kitchen constantly, preparing meals for family and friends.”

Gauthier bought the home with her former husband, John Graham, a corporate attorney, with whom she remains very close. They had previously owned a waterfront cottage in Sag Harbor, a location that spoiled them, since the parking place for their boat was outside the front door. But as their two sons—JW, now ten, and Rome, nine—grew older, the couple decided the charming space was getting a little tight and eventually started the hunt for a new home. “Our cottage was small,” Gauthier explains, “and we wanted something more family-friendly—preferably with a yard.”

After a yearlong search, Gauthier and Graham discovered the place that would win their hearts, tucked away on a quiet street in Sagaponack. The location was ideal—near Sagg Pond, with the beach a short stroll away. The house, though, had been a full-time residence for the previous owners for more than 20 years and needed a major renovation. Still, they could see transforming it. “When we walked in, we instantly felt at home,” Gauthier recalls.

Design has always been part of Gauthier’s DNA: She had operated a women’s clothing boutique, MiGa, in her home city of New Orleans and, after moving to Manhattan in 1999, the furniture shop Vieux Carré in the West Village, though she shuttered the latter six years later upon becoming pregnant. She and Graham had worked with decorator Tara Seawright on their Tribeca triplex as well as on their Sag Harbor cottage, so the choice for the right candidate to decorate their new Sagaponack home was an obvious one.

“When I start a project with clients, I first determine what they want to do with the space and how they want to live,” says Seawright, adding that she also tries to see “what’s missing.” Gauthier definitely knew what she wanted: The home had to flow freely, with all the public spaces connecting to the entertaining area and expansive lawn outside. The first order of business was eliminating the dark wood interiors. Gauthier isn’t afraid of color, but when she saw the walls covered in a white primer, she decided to keep everything white, rather than experiment with brighter hues.

While Gauthier and Seawright tended to the nitty-gritty of the interiors, Graham worked closely with builder Gerard Mingino on the house’s architecture. The home’s footprint essentially remained in place, but the exterior morphed from a shingled pile into a sleek box fashioned from painted cedar and stainless steel. Inside, a master bedroom suite was created downstairs along with two guest rooms upstairs, in addition to a bedroom already there. A two-car garage was built as well.

Seawright used some of Gauthier’s furnishings from previous residences to decorate the house’s newly reconfigured spaces, such as the vintage oak refectory table in the dining area and the Kartell Ghost chairs situated at either end, which came from the Sag Harbor home. “We purchased vintage chairs to fill out the remaining seating,” the designer says. “Their texture and neutral tones give the dining room a fresh feel.” Other pieces were retrieved from local shops, such as pillows used in the library and armchairs in the living room. Despite the interior’s absence of color, Seawright convinced Gauthier to inject touches of it in the boys’ bedroom via a vintage dresser painted a bright coral (JW and Rome love orange hues) and a chartreuse cowhide rug. “Even though Michelle is attracted to neutrals,” Seawright adds, “she has such great style that it’s not a stretch for her to be a little more adventurous now and then!”

A version of this article appeared in the July 15 2015 issue of Hamptons Cottages & Gardens with the headline: Out of the Box.