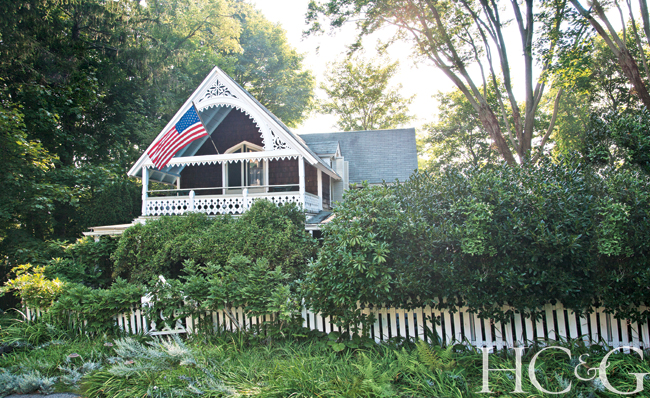 It was 1981, and Tom Fallon had no intention of buying a new house. A designer and creative brand executive who worked with Bill Blass for 20 years before branching out on his own, Fallon had received an invitation from industry pal Joanne Creveling to visit her house on Shelter Island one weekend. He and Creveling had met in the 1960s, when Fallon was working at Bergdorf Goodman as Halston’s assistant and Creveling was beginning her stellar career as a publicist. 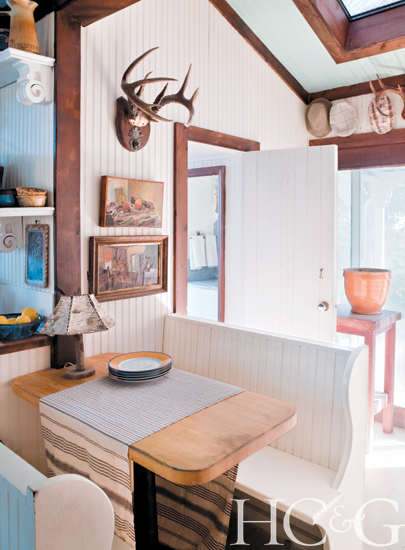 Fallon had been spending his summers living the “rock-and-roll lifestyle” of the day, as he calls it, in Southampton on the South Fork, and had little to no knowledge of Shelter Island, let alone Shelter Island Heights, the historic district where Creveling lived. (Her house was published in the August 1, 2013, issue of HC&G, just months before she died.) The neighborhood took him totally by surprise when he arrived. “I said to myself, ‘Where am I, in Maine?’” Witnessing her friend’s delight, Creveling said she’d let Fallon know in the rare event that a house became available. “I thought, I’ll hear from her three years from Sunday,” he remembers—but she called him the next day. A house had come on the market that morning. “So back I went to Shelter Island for the second time in two days. I took one look and knew I wanted that house—so I bought it.”

The two-story, three-bedroom cottage that stole his heart was built in 1875 as part of a Methodist Church vacation camp. “Religious health resorts were very popular after the Civil War,” says Fallon. “The houses were really just a collection of sitting rooms and bedrooms. There was no indoor plumbing in those days, and no kitchens because residents took communal meals at the camp refectory.” 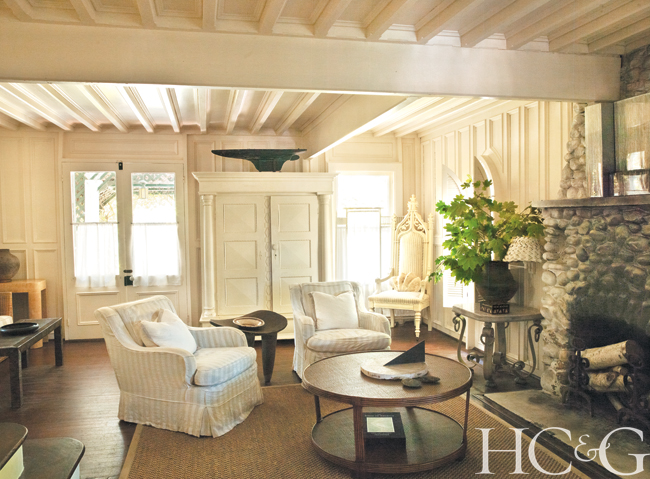 Fallon’s house had been built in the shape of a cross—probably from a kit—and then personalized with gingerbread, the intricate Victorian woodwork that is unique to each building in the Heights. The structure was in fairly decent shape when he purchased it. “The floors upstairs were a bit saggy, so I had to prop them up from underneath, but I didn’t change the overall plan,” he says. Fallon also modernized the kitchen, adding a big Gothic window, and painted the walls a basic linen white and most of the ceilings the traditional blue often seen on Victorian porches. 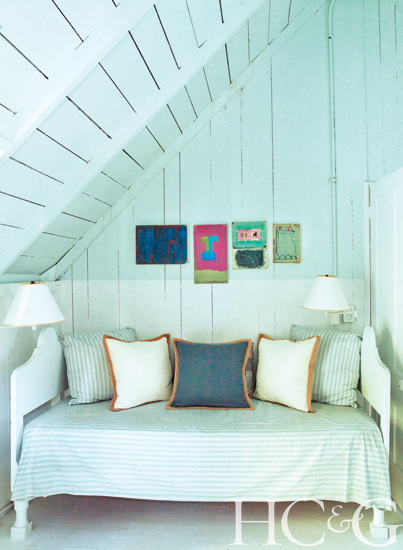 Additions and renovations had altered the cruciform floor plan, with a two-story back porch being enclosed to create a kitchen, upstairs bath, and guest bedroom, and several smaller rooms on the first floor combined to make living and dining rooms. A local ship’s carpenter installed hand-paneled walls, and a large river-stone fireplace now dominates the sitting area. Windows were moved and French doors added to let in more light.

And then there was the interior design. “I moved in with my furniture—all Mexican pine and Spanish Colonial steer-horn pieces and fur rugs,” Fallon recounts. “The Southwestern look was popular then, and there was a lot of it!” But the unerringly stylish Creveling came to the rescue, giving Fallon a book by Swedish Arts & Crafts painter Carl Larsson. “She told me, ‘This is your new style bible.’”

As a result, the house got a lot simpler, though Fallon confesses he likes to tinker. “The only interesting rooms are eclectic ones,” he says, “so I like to mix things up.” Obsessed with interiors “all through my fashion career,” Fallon never thought of making a switch to interior design until eight years ago, when he opened his house to a local walking tour. “Hundreds of people came through and kept asking me if I was a designer. I finally started answering, ‘Well, yes, I guess I am!’ That’s when I started Tom Fallon Design.”

Now he can’t get enough. “I’m a one-man operation,” says the dapper decorator, who keeps his business small by choice, so that he can do projects as minor as changing a client’s dining room curtains, if he cares to. “I don’t have a ‘look’—I just listen carefully and try to give people what they want.

“I love this house,” he continues, “both for what it is, and for what it has given me, including my second career. I may be in my 70s, but I am not ready to retire. Every spring when I come back out east, it’s like I’m discovering the place for the first time.”

A version of this article appeared in the July 15, 2014 issue of Hamptons Cottages & Gardens with the headline: Loaded with Charm

browse more photos from this feature in the full gallery below