With innovation as the theme of this issue, we went shopping for listings that were built or renovated in ingenious ways. And we found them. 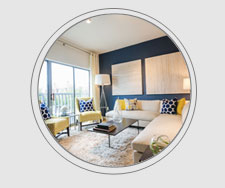 The brand-new Parallel 41 luxury rental apartment complex on Washington Boulevard in Stamford offers ample opportunities for fun. There’s the Latitude Lounge with a “game gallery,” a health club with Pilates equipment, and the 360-degree roof deck, featuring an outdoor kitchen with grills, a bar and flat-screen TVs—along with the kind of comfy lounges and sofas that are so popular among swank Manhattan rooftop bars. The apartment interiors are striking, with soaring 20-foot ceilings and sleek kitchens with countertops imported from Spain. Parallel 41 has 124 one- and two-bedroom apartments. But we’re especially enamored of the 18 penthouse units with fabulous views and private roof terraces for sunbathing and entertaining. To learn more, call 888-871-3004 or visit parallel41stamford.com.

With innovation as the theme of this issue, we went shopping for listings that were built or renovated in ingenious ways. And we found them: a renovation in Madison that incorporates an antique carriage house, a fabulous restoration of a mid-century modern in Wilton, and a sleek new apartment building in Stamford. But we also bring you news of a few notable sales in the area, starting with a follow-up to the spring’s starriest celebrity sighting, that of the actors Blake Lively (Gossip Girl) and Ryan Reynolds (Green Lantern) house-shopping in New Canaan. Turns out, the pretty pair was lured across state lines by a Bedford Colonial, listed for $2.3 million, according to the New York Post. The Post also reports that Elisabeth Hasselbeck, a cohost of The View, spent some $4 million on a Greenwich estate while her Upper West Side condo is listed for $3.3 million. See you in September! 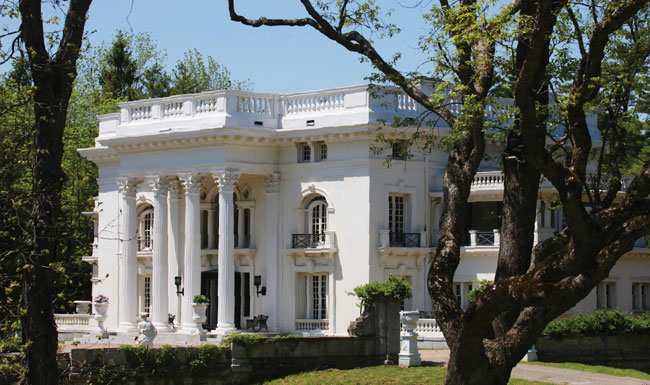 The Colgate Mansion
$10,950,000
Sharon
As we move into election season, it may comfort one candidate or another to learn there’s a White House-like property you don’t have to campaign for to win (a mere $11 million takes it). It was built in 1903 for Romulus Riggs Colgate, a gas and electricity tycoon, who spent $2 million—an estimated $43 million in today’s dollars—on his Italian Renaissance, Corinthian-columned, wedding cake of an estate. And Mr. Colgate’s investment is largely unchanged—here’s where innovation would be an intrusion, at least for those who like plaster-of-Paris renderings of noblemen carved into their ceilings, footed tubs and marble sinks with porcelain water handles. The 19-room interiors start with a reception hall that features pale green marble and carved oak wainscoting and is billed as “also serving as a ballroom,” to give you an idea of its size. Additional grand rooms on the first floor include a dining hall, living room, billiard room and study. On the 109 acres, find an imposing front courtyard with a fountain and privet hedges, an English horse barn with six stalls, a reflecting pool and wide carriage trails for hiking. Kathryn Clair and Pat Lahoud of Sotheby’s International Realty in Washington Depot share the listing. 860-868-6926 and 860-868-6925. 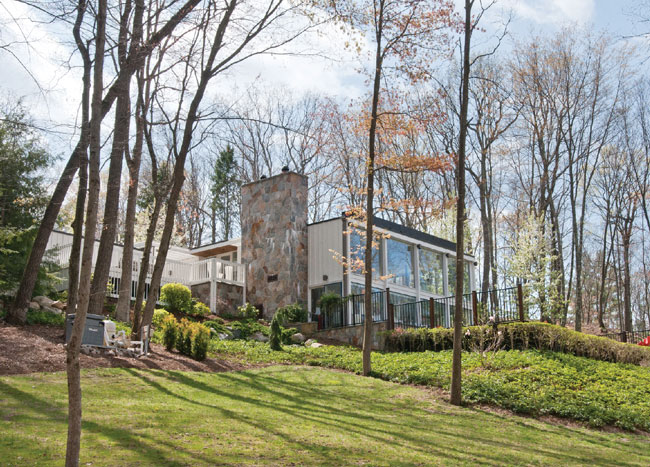 Mid-Century Modern
$2,499,000
Wilton
Rob Graff, an architect with the firm established by the mid-century master Eliot Noyes, designed this low-slung, sophisticated home to complement its dramatic 2.3-acre setting. The nearly 4,000-square-foot structure nestles into a rocky, wooded hillside and is loaded with skylights and window walls to bring nature in. Inside, we love the open-plan great room that devotes an entire wall to a stone hearth and another to windows onto the woods. Outside, there are multiple terraces, including one for the gunite pool. Inger Stringfellow and Susan Blabey, both of William Pitt Sotheby’s International Realty in New Canaan, have the listing. 203-321-9361 and 203-979-7774.

Renovated Estate
$2,995,000
Westport
Here’s an expansive, resort-like property that offers 10,000-square-feet of renovated interiors. Built in 1954, the open plan features beamed, cathedral ceilings, walls of windows and a floor-to-ceiling stone hearth, along with nine bedrooms and eight bathrooms (as well as one half bathroom). There’s more to love on the 3.11-acre grounds, including a pool, tennis court, pretty gardens and ornamental trees. It’s listed with Margaret Block of Coldwell Banker in Westport. 203-858-9697. 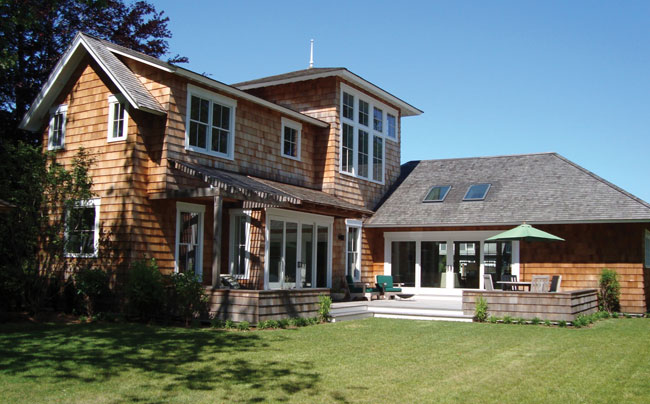 Renovated Carriage House
$1,375,000
Madison
Designer-builder Bill Plunkett is credited with several cool projects in Madison that go beyond mere renovation. In the case of this circa-1908 carriage house, Plunkett reimagined it, incorporating the bones of the antique structure into what resembles a modern-day shingle-style home. Most notably, the 34-foot-long, two-story great room was fashioned from the carriage house, from which rolling, floor-to-ceiling wooden doors were also retained. For all of its antique appeal, the interiors of this 2,183-square-foot home are newly constructed with top-quality fixtures and appliances. The three-bedroom, two-bathroom property along lovely Middle Beach Road also has Long Island Sound views and deeded beach access. It’s offered by Margaret Muir of William Pitt Sotheby’s International Realty in Madison. 203-738-0202.