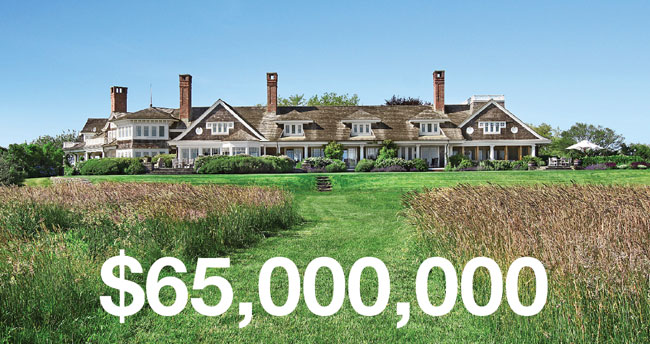 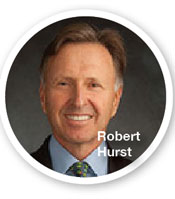 At $65 million, Robert Hurst’s 11,700-square-foot compound in Sagaponack is setting a new high-water mark in Hamptons real estate. The property is located on Sagg Pond, which is often referred to as “Goldman Pond” because its shorefront is populated with Goldman Sachs residents, such as former vice chairman Hurst, current CEO Lloyd Blankfein, and president Gary Cohn.

Hurst bought 33 acres of farmland in the 1990s for a reported $5 million at around the same time Ira Rennert bought his 63 potato-farm acres in Sagaponack for $11 million. While Hurst’s home plans seemed quite large in scale, given the modest nearby houses of artists and writers (such as Peter Matthiessen, who lives down the street), they were nothing compared to Ira Rennert’s 100,000-square-foot Fairfield. During that era, both projects went under the radar as all eyes were focusing on the terrible beach erosion that caused at least one house to wash into the ocean and most others to be moved back from the shoreline. “Nowadays there’s nothing remotely like it,” says Corcoran Group’s Debbie Loeffler, who has the Hurst listing with partner Julie Briggs. “It’s the only chance anyone will have to find a parcel as big as 33 acres on the water in Sagaponack. We really had a challenge looking for comparable properties for pricing.” The 2007 record-setting, $103 million Further Lane sale to Ron Baron was 40 acres of oceanfront land in East Hampton without a house. The barns on the land were donated to the town of East Hampton and now serve as town hall buildings. Of the Hurst property, Loeffler also notes, “Here, you have the bonus of an adjacent 19-acre preserve. A great part of the appeal is privacy—oceanfront isn’t even as private as this. And you can just paddle over to the beach if you want.”

The estate has eight bedrooms, eight-and-a-half bathrooms, vaulted ceilings, six fireplaces, a wood-paneled library, a media room, and a grand limestone entry gallery. The property includes a tennis court, mature gardens, and a separate building with a gym, as well as a built-in grill, screened patio, heated pool, and spa. “This home takes advantage of the tremendous views of both Sagg Pond and the Atlantic, creating opportunities for the house to unfold and present architectural moments and surprises around each corner,” says Arthur C. Hanlon, partner at Shope Reno Wharton, the property’s architect.

A hidden benefit, incredibly, is taxes. Public records show a $30,000 annual tax bill, a pittance compared to the $89,000 assessed on a $35 million property on Southampton’s Meadow Lane. Despite having one of the wealthiest ZIP codes in the country, Sagaponack, with only a Little Red Schoolhouse, enjoys a lower tax rate than the rest of the Hamptons, where soaring education costs translate into rising homeowner taxes. 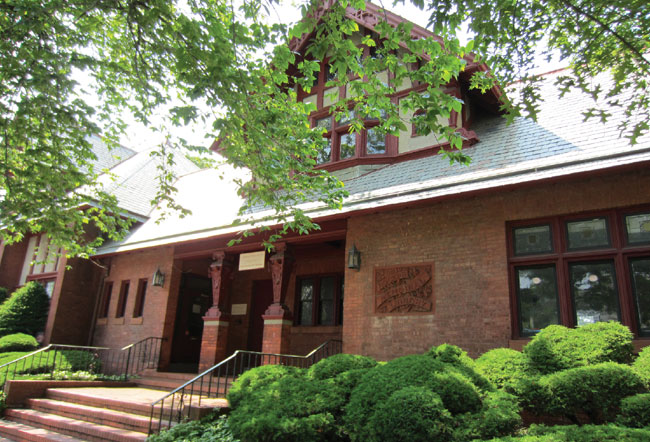 THE PARRISH SELLS A PIECE OF ITS PAST
The Parrish Art Museum’s Carroll Petrie Center for Education Building at 11 Jobs Lane, adjacent to the main museum, has reportedly sold for $2.875 million to Ajax Holdings LLC. As part of an original expansion plan, the Parrish bought the historic brick building (then the Rogers Memorial Library) for $1.1 million in 2000. Funding came from board member Carroll Petrie, who donated $3 million toward the purchase and renovation.

The original idea was to renovate and expand the main museum at 25 Jobs Lane with the ability to create a mini-campus at 11 Jobs Lane, according to museum director Terrie Sultan. The ultimate rejection of this plan by Southampton Village inspired the idea to move the museum’s entire operation of exhibition, education, and event space into one building. This led to the commission of the new Herzog & de Meuron–designed museum in Water Mill, which is expected to be completed this fall.

The reported owner of Ajax Holdings LLC is Jonathan S. Sobel, a former Goldman Sachs partner who has been a longtime supporter of the Parrish Art Museum (his wife is a trustee). Sobel has been working his way around the automotive district of the Hamptons, having recently purchased the local BMW and Mini of Southampton and Audi dealerships. He has reportedly agreed to lease the building at 11 Jobs Lane to the Parrish for $1 until the final move to Water Mill.

“This market has legs, and it will continue to be a strong season
unless global conflicts really erupt”

Southampton Mayor Mark Epley is on the record saying that Sobel plans to restore the building, which dates to 1893, when local resident Harriet Jones Rogers bequeathed the land and $10,000 to build a library in memory of her mother, Clara. Grosvenor Atterbury designed an addition in 1915, and it served for more than a century as the Rogers Memorial Library.

Exact plans for the new space have not been revealed, but there is speculation it could be a retail and office space. Is that Clara rolling over in her grave at the thought of designer purses possibly taking the place of poetry? Locals who view the building and its front yard as sacred turf for everything from ice-cream eating to the annual menorah lighting have expressed concern for the building’s future.

And speaking of futures—there’s still no word on a tenant for the Parrish’s current main location. But the 25 Jobs Lane property will not be for sale. It is owned by the village, left by Samuel Parrish’s estate and designated for a cultural purpose.

MIDSUMMER HOUSING MARKET HITS ITS STRIDE
Hamptons real estate brokers have been hoping that the sales increases seen early in the year were not a fluke, like the unusually warm weather. Mother Nature and the market have cooperated to keep things full speed ahead. “This is the busiest sales market since 2006,” says Andrew Saunders of Saunders & Associates. “It started the second week in January and hasn’t stopped. The noteworthy element is that the critical mass of sales is under $2 million.” Statistics show that homes sold for less than $2 million represent 75 percent of 2012’s first-quarter sales. “It’s not intuitively obvious,” says Saunders. “When people think about the Hamptons, they think about the headline-making deals in the $10 million and $20 million range. You have to be a player in the lower range of the market to prosper.”

But high-end real estate is going gangbusters too. Saunders notes the luxury market is the strongest since 2005 and 2006. While vagaries in the economy and the world at large can undermine second-home sales, which are clearly discretionary purchases, Saunders cites a general confidence. “This market has legs,” he says, “and it will continue to be a strong season unless global conflicts really erupt.”

Has the turmoil in international markets increased the amount of European and other foreign monies being parked in Hamptons real estate? “There has always been international interest, especially in Southampton,” says Saunders. “You can hardly walk down Main Street in the village and hear anyone speaking English. However, while there are some deals with Russians, Chinese, and Europeans, it is not a defining quality of the market. The majority of the buyers are still from New York or the West Coast.”

For those with deep pockets, Saunders is seeing some new construction moving toward adventurous design. “There’s a new estate built by George Gavalas on Daniel’s Lane in Sagaponack that recently listed for $21.9 million,” he says. “It’s beautifully executed.”

The 10,000-square-foot, nine-bedroom, 12-bathroom home with six fireplaces includes three floors, with an elevator and a rooftop widow’s walk featuring a wet bar and ocean views. The property has a 60-foot pool, spa, two pool houses, all-weather tennis court with a basketball system, and a two-car garage with a lift that can accommodate four cars. A Crestron home automation system allows all of the houses’ electronic functions to be controlled from a computer.

Stuart Epstein of Devlin McNiff Halstead describes the current market as moving sideways. “You can get very granular in terms of percentages of change in different hamlets, but as for the big picture, it is steady as she goes. There’s still an education process for everyone involved and some capitulation by sellers.”


“If it’s slick and sharp, it sells. That’s what the audience wants”

He notes that the low end of the market has gotten even lower. “It used to be around $600,000 in the bubble. Now that’s come way down to the mid-$300,000s to mid-$500,000s, which is a price many more people can afford. In the low to middle range, price sensitivity is extremely important as to what’s moving. At every level in the spectrum, however, price is paramount and cash is always king.”

Surprisingly, it’s not only the financial sector of Manhattan that’s driving the market, but many creative people from advertising, publishing, decorating, and fashion, according to Epstein. “Young people of means want to get out of the city—and not just on weekends and in the summer, but all year long,” he says. While flipping houses is certainly a trend of the past, Epstein notes an increase in “developing,” where certain designers create a unique, elegant product for the market. “If it’s slick and sharp, it sells. That’s what the audience wants.”

For an example, he points to Ed Brody’s $3,950,000 listing of a neo-farmhouse in East Hampton. Designer Jeffrey Rosen (now also creative director at Yankee Barn Homes) exports high-quality post-and-beam structures from New Hampshire and custom finishes the interiors for a classic barn look, with 23-foot ceilings plus all new appointments and systems. The 5,000-square-foot, six-bedroom, five-and-a-half-bathroom house with heated pool on half an acre is his second project. The first, on Sherrill Road in the village, was snapped up quickly last year.

What else is hot this summer? “The Lanes” of Amagansett, reaching south of the Montauk Highway to the beach. “Further Lane and Lily Pond never change; they continue to be valuable. There’s nothing new or different, just musical chairs,” says Epstein. “But the Lanes of Amagansett have gone through a transformation. All of the half-acre ranch houses have gradually been purchased or gentrified. We have people on larger properties in less populated areas who want to live closer to the village. The notion of biking or walking to go shopping in the village or to the beach is very appealing.” Houses are now fetching upwards of $5 million, with $225,000 rental seasons.