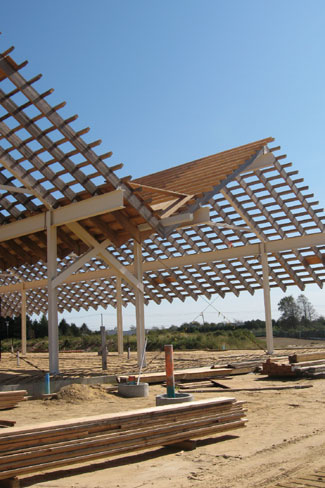 Rising from a field on Highway 27 in Water Mill, the new Parrish Art Museum is seeing the famed East End light at the end of the tunnel. With a projected fall 2012 opening date, the $26.2 million building designed by the renowned Swiss architectural firm Herzog & de Meuron is situated at a due north angle to bathe its artworks in that much-lauded light.
“We spent a lot of time visiting artists’ studios in the Hamptons to understand the natural light conditions here,” says de Meuron. “The artist studio forms the DNA of the building, and it was important to create something powerful that still has a human scale.” A central spine joins two airy, barnlike structures with flexible interior space to form the 34,500-square-foot museum, which will have a café and store in addition to galleries for viewing art. The new Parrish even provides a place for art lovers to congregate: A concrete bench runs the length of the exterior wall, so “you can literally sit on the building.”

Main Street Mania
Economic health is often determined by what’s happening on both Wall Street and Main Street. When Main Street storefronts sat empty in the Hamptons these past few winters, there was concern about the strength of the retail economy. Certain stores took the opportunity to “pop up” in the Hamptons—meaning they could negotiate a summer lease for a shorter term. But luxury-goods buying is never out of style for long, and space is now trading  at a premium, according to the commercial power brokers.

Hal Zwick of Devlin McNiff Halstead Property says it’s stronger than many think: “We had 16 pop-ups last year in East Hampton but only four or five this year, and those pop-ups paid 75 percent more than last year. Most of the commercial leases are multi-year, even five to ten years, and this year they were 25 percent higher than 2010.” In tiny Bridgehampton, which has limited availability, Zwick even saw a bidding war over one retail space, which ended in a 30 percent increase over the previous year. “It’s all about supply and demand. We don’t have to sell a 500-store mall here.”

Corcoran senior vice president Elaine Stimmel reports: “After a remarkable summer, things are really buzzing in East Hampton Village, which has encouraged stores to stay through the winter. Restoration Hardware, for example, is doing really well, and empty retail spaces are very hard to come by—almost nonexistent in East Hampton, which benefits from lots of foot traffic.”

With astronomical rents, only big retail chains can truly afford any seasonal ups and downs that come their way. “I can count all the Mom and Pop stores on one hand,” says Stimmel. Yet only a few retailers own their own space. Elie Tahari bought his building in 2006 for a reported $7.5 million, and the building where J. Crew leases space reportedly went for  $9 million in 2008. The rare dip in East Hampton’s Main Street market was seen in the sale of 23 Main Street, which the high-end handbag and shoe company Devi Kroell bought in 2010 for $3,750,000, the last recorded trade on the town’s commercial drag in the midst of the economic downturn.

Stimmel says space in other hamlets is also scarce: “Sag Harbor Village prices are a bit more relaxed than East Hampton, but in terms of leases, there was almost nothing to be had.” Water Mill is a better bet. One prime village location in Southampton is 83 Jobs Lane, with eight stores and an apartment listed for $4.3 million with Corcoran’s Maritza Jimenez.

So what’s the hottest trend in the mania for Main Street real estate? “Spin studios,” says Lee Minetree of Saunders & Associates. “I’ve worked with everyone from Flywheel to B East  to Soul Cycle, and had at least three other people looking for spin studios. You need open space and plenty of parking, which is the thing that’s really tough to get!” 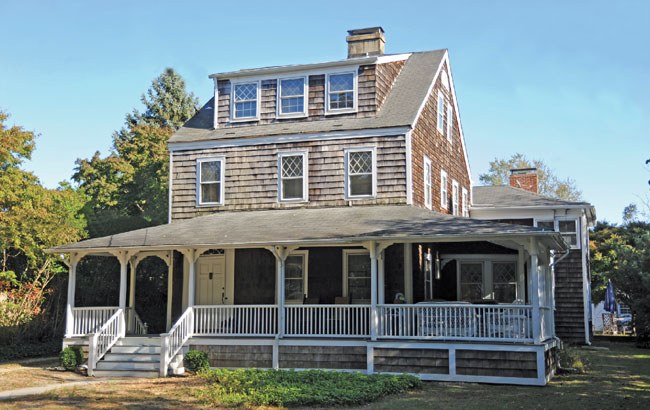 SPEAKING OF MAIN STREET . . .
Long before chic boutiques and pop-ups took over our towns’ main drags, there was no such thing as South of the Highway—or even a highway, for that matter. The most prestigious address for Hamptons homeowners was Main Street. Fortunately, preservationists and
architectural review boards have assured the integrity of the historic homes that still line this all-important road, and like waterfront property, these residences have managed to hold their value through market fluctuations.

Currently for sale in East Hampton is a six-bedroom, four-and-a-half-bath, three-story Main Street home with five fireplaces. Situated on a shy acre (large by village standards), it includes mature gardens, a heated pool and three-car garage and is listed for $4.9 million. Exclusive broker Beate V. Moore, senior vice president of Sotheby’s International Realty, points out the property’s notable pedigree. “This exquisitely renovated house was built in 1800 by Daniel Osborn and was the main home of the Osborn family,” she says. “The home reflects beautiful period detail and is adjacent to the Osborn-Jackson House. The Osborn family is well known for having built a number of historic homes in the area, as well as the Wainscott schoolhouse.”

Down in Sag Harbor, 19th-century whaling captains were the hedge-fund managers of their time, using their vast wealth to build impressive houses, many of which still stand on Main Street today. On historic “Captain’s Row,” a seven-bedroom, six-bath home is listed with Whitney St. John Fairchild and Carol Kingston of Saunders & Associates for $2.495 million. On nearly half an acre, this circa-1900 village classic includes gardens and a pool. Currently divided into five separate apartments, it could be restored to the grand single-family residence it once was by a buyer with vision and a respect for past eras.

Stuart Epstein, who founded Devlin McNiff with his wife, Lynn, in 1971, says, “We have the best of both worlds with an independent, entrepreneurial culture and the marketing, technology, and referral networks of a powerful tri-state brand.” Although Devlin McNiff came late to the Hamptons real-estate merger movement, Epstein is more than content with the move: “If you could turn back the clock and say, Who would you want to be your dance partner?, we would have chosen Halstead immediately.” The Epsteins will manage the office with plans to add new hires to their agent pool.

Real Estate Drama
The news is not so good for Sag Harbor’s beloved Bay Street Theatre. Landlord Malloy Enterprises reportedly raised the rent from $186,000 to $200,000 per year, leaving the theater in search of a new home after its 2012 season.

This article appears in the December 2011 issue of HC&G (Hamptons Cottages & Gardens).