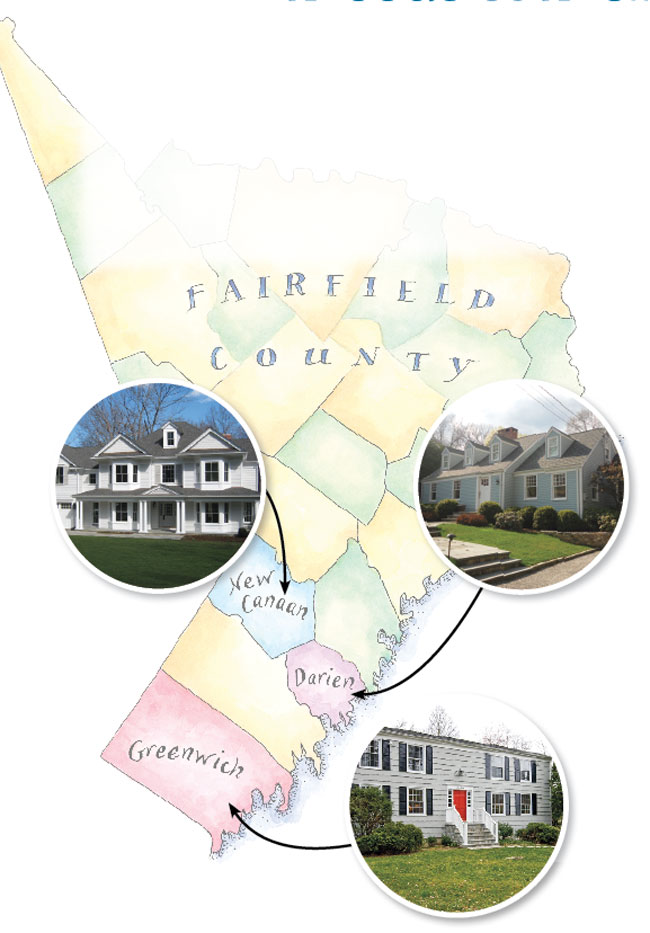 When we polled Realtors about Fairfield County’s hottest-selling streets, their answers surprised us—and pointed to a shift in the demographic that defines today’s buyers. During the boom years, a steady influx of Wall Street money meant most buyers had the means to purchase—and hike up demand for—high-end coastal homes and secluded country estates.

Back then, the bigger the better; money was no issue. Today, our state is much more affordable, and a driving force in the market are families looking for lovely (but smaller) homes on neighborly streets close to schools and town, according to Rachel Walsh of William Pitt Sotheby’s International Realty, who covers both Darien and New Canaan.

A prime example in Darien: the series of streets that end in cul-de-sacs off Mansfield Avenue, including Sunset, Knollwood, St. Nicholas and Fox Hill, where for-sale homes range from about $1.5 to $3 million and up. Recently on Sunset, a home listed for $2,049,000 million went to contract (presumably at ask or close; details are not yet public) in four days, before the owner/broker had time to hold an  open house.

In New Canaan, while the mansions lining “the Ridges”—Oenoke, Ponus and Smith Ridges—are desirable, there’s a similar trend toward in-town and smaller homes, favored both by families moving from the city and retirees looking to downsize. Walsh finds listings like her $2,795,000, new-construction Colonial on Dogwood Lane, close to Irwin Park and town, appealing to those kinds of buyers.

In Greenwich, Realtors report quick sales in Riverside, a lovely section of town with smaller properties than, say, the hedge-fund estates in Round Hill and Belle Haven. For instance, on Riverside’s Lockwood Lane (another cul-de-sac, this one within walking distance of Eastern Middle School), a renovated clapboard Colonial listed for $1,595,000 generated an offer within three days. For buyers with a bit more to invest  in a home, Old Greenwich sells well, offering a fabulous community with a coastal feel and access to beautiful beaches, says Janet Milligan, managing director of Exceptional Properties for William Raveis in Greenwich.


Come May, homes with exterior amenities shine,
upstaging even the grandest interiors as buyers stroll gardens, ramble across lawns and settle onto terraces to take in the views. We’ve followed suit with five fabulous listings featuring awesome outdoor assets including bluffs and beaches, orchards and barns, and not one but two gardens credited to the early 20th-century “lady garden designer” Agnes Selkirk Clark. Join us! 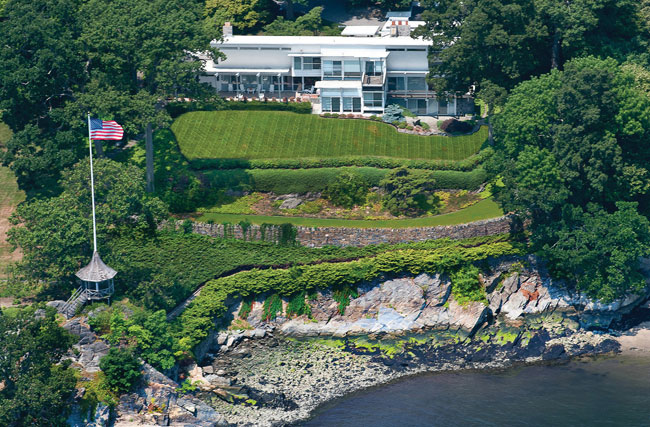 Paul Rudolph-Designed Home
$12,495,000
Greenwich
We’re enthused by anything designed by Paul Rudolph, former dean of the Yale School of Architecture, but this one has us enthralled. Rudolph was known for his clean geometric lines and—especially among his civic and corporate buildings—brutalist aesthetic. Called Clifton-on-the-Sound, this circa-1985 home’s most striking feature is its setting, 3.8 acres perched along the rocky bluffs rising from the Byram coastline, with views over the water, Great Captain’s Island and beyond. Close to the house are manicured and rolling lawns that drop off to paths down to a cliffside gazebo and a private dock. The 6,462-square-foot home offers airy, open-plan rooms, four bedrooms, four bathrooms (plus one half bathroom) and expansive terraces, including a private deck off the master suite. Bill Andruss of Sotheby’s International Realty in Greenwich has the listing. 203-618-3101. 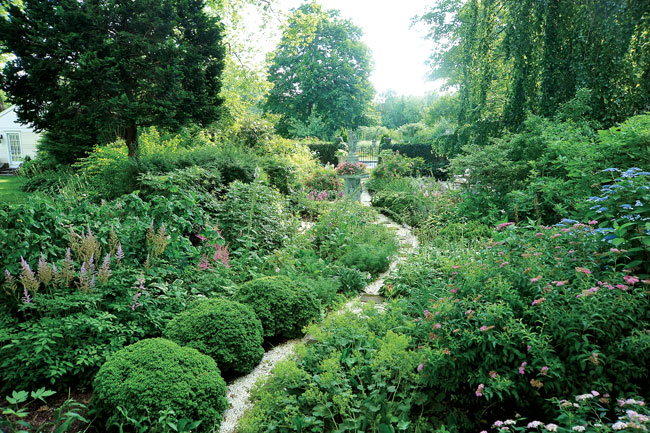 Sea View Farm
$6.9 million
Fairfield
Cameron Clark was a regional architect famous for his grand, traditional homes built early in the 1900s, in the northern part of Fairfield called Greenfield Hill. Here is one of his most sprawling properties on 18 acres along lovely Congress Street, with grounds that feature a pool, spa and a pool house with a full kitchen, an antique barn, a greenhouse, and a garage with a hydraulic lift. But the gardens are the most striking feature, designed by Clark’s wife, Agnes Selkirk Clark. There are garden paths with an Italian fountain and statuary, a stone gazebo, and ornamental wrought-iron gates. There’s every hue of hydrangea, masses of roses, cherry trees and gardened terraces. Inside, the 9,400-square-foot, circa-1920 home features a fabulous kitchen with 20-foot ceilings and a fireplace with a limestone mantel and a newly built-out third floor with a billiards room. It’s offered by Pam Foarde of Al Filippone Associates, affiliated with William Raveis Real Estate. 203-257-9110. 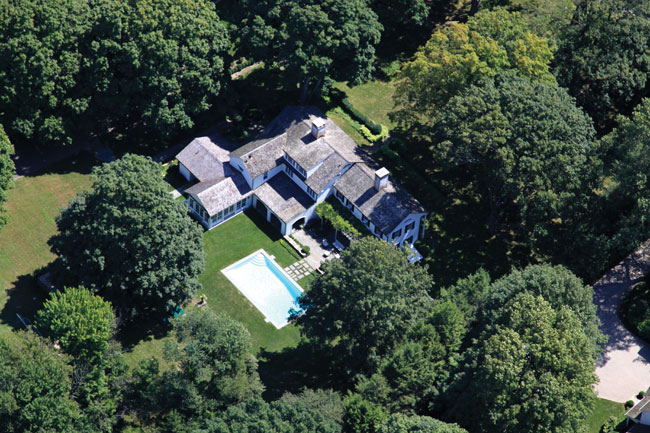 country Compound
$3.5 million
easton
Here is the second of this month’s homes featuring exteriors designed by Agnes Selkirk Clark, a so-called “lady gardener,” who often worked with her husband, famed architect Cameron Clark. For this 8-acre property, Mrs. Clark created an elaborate walled English garden, while Mr. Clark designed additions and renovations to the circa-1810 Federal-style home. The grounds are set up as a true compound with a pony barn, chicken coop, a pool house with an indoor pool, a caretaker’s house with three bedrooms, a barn-style garage with a hay loft, an apple orchard and access to more than 500 acres of protected land offering hiking and cross-country ski trails. There’s more fun to be had indoors, in the antique, wood-paneled “tavern room” and a newly constructed kitchen addition that includes a family room with vaulted ceilings and French doors leading to the outdoor pool and terraces. In all, the main house offers five bedrooms and four full bathrooms, plus two half bathrooms. Andrew Whiteley of Fite Shavell & Associates. 203-258-1595. 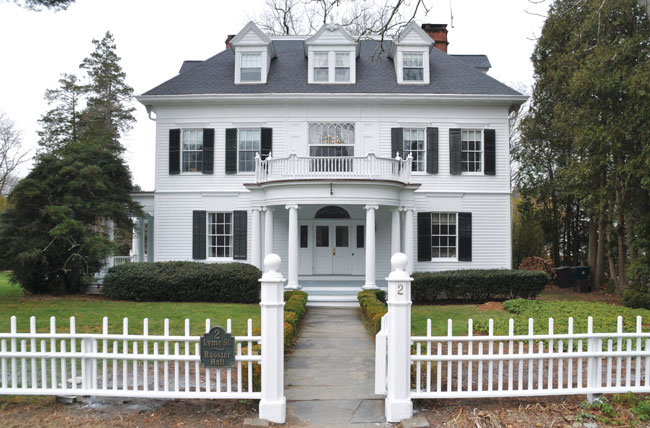 Ludington House
$1,975,000
Old Lyme Village
The village of Old Lyme combines the charm of traditional New England with the pleasures of living along Long Island Sound, a mix that has always attracted families, retirees, seafaring types and artists. In the heart of the village is Ludington House, a stately Georgian Revival built around 1895 by architect Henry R. Marshall, who also built the Congregational Church next door. Unusual for an in-town home, Ludington is set on nearly two acres, with formal gardens and a barn out back. Owners can watch the world walk by from twin rounded porches that create a verandah space; there’s also a 30-square-foot bluestone terrace for entertaining. Inside, the 9,000-square-foot interiors have been beautifully restored, featuring eight fireplaces, nine bedrooms, eight bathrooms and one half bathroom. It’s offered by Colette Harron of William Pitt Sotheby’s International Realty in Essex. 860-304-2391.

Weston Antique
$1,295,000
This handsome circa-1737 home looks like a movie set for the classic Connecticut Colonial. It features gleaming Chestnut floorboards and woodwork, cozy fireplaces (four of them) and antique details but also a chic mix of fixtures and furnishings in every room. We have current owner John August Weiss, chief operating officer of the furnishings empire Lillian August, to thank for its pleasing presentation. And we’d encourage any family looking to join Weston’s lovely community and stellar schools to stop at 301 Newtown Turnpike—this place is beyond turnkey in its offerings. The interiors offer a wonderful kitchen with soapstone counters, walls of windows and French doors opening onto the formal dining area. The lovely master suite has an expansive private bath, and there are an additional four bedrooms and two full bathrooms (plus one half bathroom). On the two-acre property: stone walls and terraces, rolling lawns, a pond and a legal rental cottage. It’s listed with Sandra Calise of Settlers & Traders Real Estate Company. 203-644-4833.