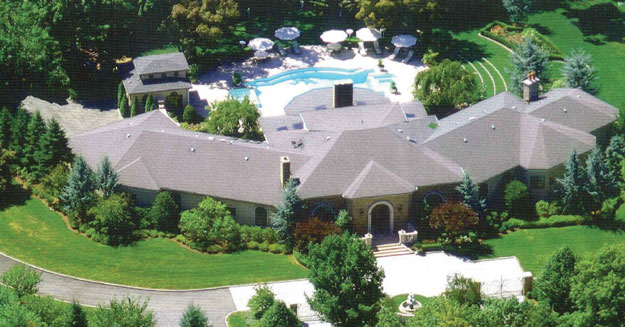 Most years, the fall market traces a predictable course: a lazy, lethargic summer is followed by an intense blaze of activity, ending in a dark period when all business is put on hold for the holidays. At this writing, brokers in both Connecticut and Westchester report that while we’re emerging from our summer-like lethargy, there has been no significant sales activity to date. Normally, they would weather these doldrums with confidence: This happens every year, after all. But after an especially slow summer, our sources sound a little less than sanguine. One potential bright spot: Rumor has it that the 23,000-square-foot Dunnellen Hall, the Greenwich estate of the late Leona Helmsley, may have an offer at $55 million, less than half of its original asking price of $125 million in 2008. This news follows confirmation that another long-time Greenwich listing has sold: actor Mel Gibson’s 75-acre Tudor-style estate. According to Greenwich town records, this handsome backcountry retreat is in the hands of a buyer listed as Cosette Property LLC. Let’s hope these deals—alleged and actual—are a sign of good things to come for the worthy listings featured here.

Windsor Court is a posh name to live up to, and this nearly 14,000-square-foot brick residence does not disappoint. For starters, the two-plus-acre grounds are fit for royalty—there’s a lavish terrace with a Shoreline pool, a pool house, a full-sized outdoor kitchen and formal gardens with statuary and fountains. Inside are a main-floor master suite with a spa bathroom, a dining hall that seats 20 and a sunken living room with 12-foot ceilings. The good life continues downstairs with facilities to rival any country club: billiard room and fitness room, a hot tub, spa, steam shower and his-and-her dressing rooms, and a wine-tasting room and home theater. Billie Prizio of Houlihan-Lawrence in Rye, NY has the listing. (914) 967-7680, extension 342. 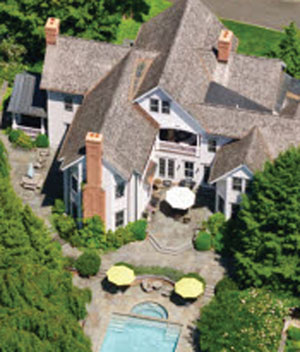 We never tire of hearing about the awesome amenities homeowners indulge in: a wine-tasting room here, a tennis pavilion there. Here’s a listing that’s got all the bells and whistles imaginable, virtually a fully-equipped resort that someone gets to call home. Sited in the heart of Ridgefield, Connecticut, in the mansion district along Main Street, the circa-2000 Queen Anne Victorian includes a 24-seat theater, a formal pool with a fountain, a tennis/sport court and an English pub—along with 9,000-plus square feet of lovely interiors. It’s yours for $4,395,000 and is listed with Chip Neumann of Neumann Real Estate in Ridgefield. (203) 438-0455

We can’t tell you who owns this beautiful, barn-style home, but we can say that a past owner was a Goldman Sachs vice chairman. And residents of the tiny town of Roxbury include Candace Bushnell, Denis Leary, Stephen Sondheim and Daniel Day Lewis, to name just a few. Designed by Juan Montoya, the interiors have the glamour of a movie-star cowboy: rugged, handsome and sexy (we’re feeling Paul Newman in Cool Hand Luke but Josh Brolin in No Country For Old Men also works just fine). Both the lofty, open-plan great room and the gorgeous master suite feature exposed beams and dramatic floor-to-ceiling stone fireplaces. But our favorite spot would have to be the master bath, with more rough-hewn woodwork and a huge copper soaking tub. On the 66-acre grounds: a barn, pool, guesthouse, tennis court and meadows. Peter Klemm of Klemm Real Estate in Washington Depot, CT has the listing. (860) 868-7313.

There’s not a more tradition-bound hamlet than Bedford, arguably the wealthiest corner of Westchester County, where Martha Stewart is decorating some 150 acres, Richard Gere renovated the Bedford Post Inn, and George Soros, Ralph Lauren and Glenn Close have all owned homes. So it’s cool to find a contemporary among the Colonials, and in our view, this circa-1985 home is the absolute coolest. Completely renovated a few years ago, the 6,200-square-foot interiors are, in a word, heaven: the clean, open-plan spaces look like pages ripped from a Design Within Reach catalog but with better views—18-plus private acres that include a spring-fed swimming rock quarry, groomed trails, an ice skating pond, a sustainable herb garden and a waterfall. In all, the home offers five bedrooms, four bathrooms (and one half bathroom), plus an office and fitness room. It’s represented by Caroline Shepherd of Houlihan-Lawrence on the Bedford Village Green, NY. (914) 234-9099. 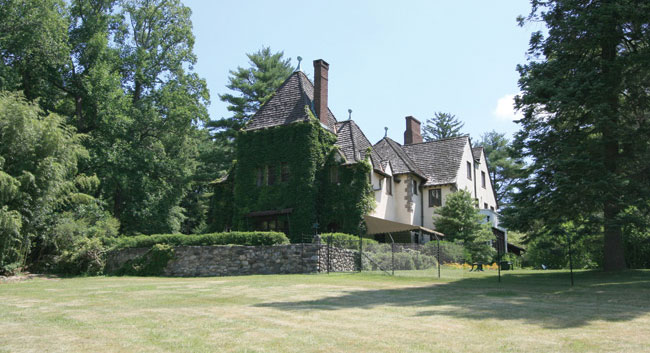 The unique qualities offered by this circa-1913 Tudor Revival manor house start with the views—over the Cross River and Croton reservoirs and all the way down to Manhattan. Sited high on a hilltop on more than 16 private acres, the grounds also offer rolling lawns, formal gardens, stone walls and a caretaker’s cottage. On the market for the first time since the 1930s—and recently priced reduced—The Belfry’s 28 rooms are infused with Old World craftsmanship. In all, it offers 10 bedrooms and eight bathrooms (plus one half bathroom), including a master suite with a fireplace and his-and-her dressings rooms and baths. The Belfry is offered by Muffin Dowdle of Ginnel Real Estate in Bedford Hills, NY. (914) 234-9234, extension 101. 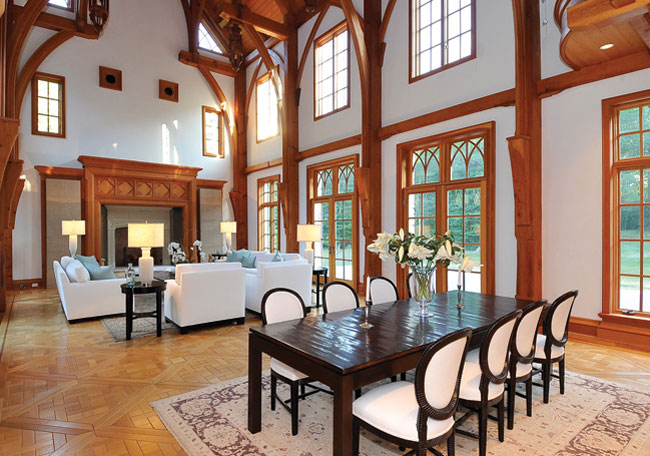 The appeal of this English Country manor estate is that it looks entirely handcrafted, from the rough-hewn stonework in the 5,000-square-foot basement, which includes a stone wine grotto, to the antique tibers gracing the vaulted ceilings in the two-story library suite. And it took quite a few hands to craft the 18,000-square-foot interiors—including those of the head woodcarver for the WIndsor Castle Restoration project, an artisan who spent five years working on two fireplace surrounds. Although its charms are too numerous to describe here, the most extraordinary space is the Great Hall, with 40-foot ceilings, a bibe-foot-high fireplace and a “minstrel’s balcony” that’s perfect for that choir you hire at Christmas.

The second most appealing thing about this listing: the price has dropped by $8 million since it came on the market for more than $12 million a couple of years ago. Call it a victim of bad timing: 2008 wasn’t the best time to sell a manse of this magnitude and the property eventually went into foreclosure. It’s now owned by Webster Bank. Good news for buyers: Banks are always the most motivated of sellers and they tend to offer advantageous loans, too.

As if anyone needed further incentive to tour the place, the home is now “dressed to sell” by renowned L.A. stager Meridith Baer, who has worked on properties bought and sold by the likes of Halle Berry, Harrison Ford, Reese Witherspoon and Brad Pitt. Baer and her team of designers and stagers pull from the company’s 45,000 square-foot warehouse of furnishings and accessories. To see her work gracing this New Canaan estate, get in touch with Bonnie Paige of William Raveis Exceptional Properties in Southport. (203) 331-7512. 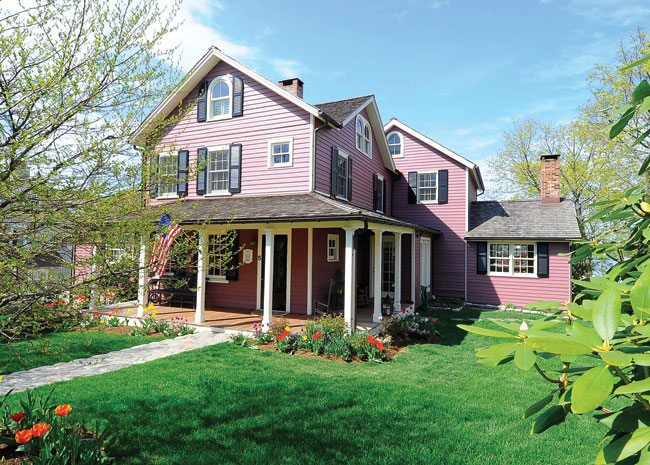 Built in 1867, this farmhouse is the oldest home in the beachy enclave called Bell Island, part of charming Rowayton. That means that Bell’s first family had their pick of plots and they chose well: The pretty home is on a corner lot with expansive water views from most rooms, along with deeded access to a private beach, jetty and mooring. Consider it a case of the best of all worlds: You get to live at the beach but you’re within walking distance of Rowayton Village—itself less than an hour by train to New York City. You also get the look of an antique but with renovated interiors, now measuring 2,811 square feet. In all, the home offers four bedrooms, three bathrooms (plus one half bathroom) and a wonderful kitchen opening onto a large deck overlooking Wilson Cove, part of Long Island Sound. It’s listed with Kristi Law of William Raveis in Darien, CT. (203) 655-1423.