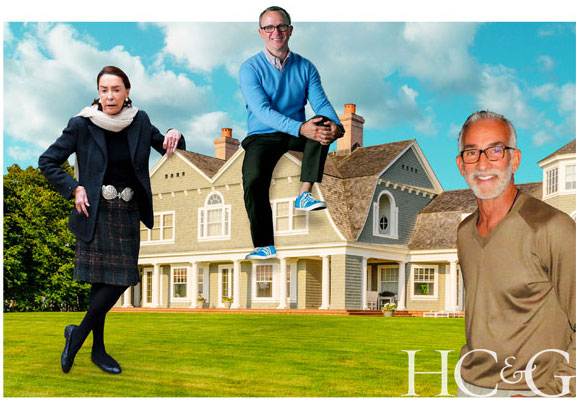 “A home in the Hamptons”: It’s a fraught phrase. To the uninitiated, the East End is a wonderland of famous folks and captains of industry. To aspirational types, becoming a homeowner in the Hamptons means joining the in-crowd and reaching a pinnacle that’s beyond the grasp of mere mortals. But it doesn’t stop there.

When a place on Little Noyac Path or a cottage on Wyandanch is finally yours, picking the right decorator to kit it out is as crucial as keeping the privet clipped just so. Even in the Hamptons, fortunes and addresses can change overnight, so it’s best to keep your hard-fought-for place in tip-top shape.

“Good decorating can make a huge difference in a house’s appeal to potential buyers,” says Saunders & Associates agent Diane Saatchi, who has seen firsthand how a top designer can influence a property’s curb appeal. “The way a house looks when you first walk in really matters. That said, does using a well-known designer bring an extra ten percent or sell a home six weeks faster? I wish I could quantify that.”

“Most buyers have trouble visualizing a finished space,” adds Southampton-based architect and interior designer Brian Brady, who knows his way around a Hamptons house re-do. “A fully decorated space gives a buyer much clearer vision.” 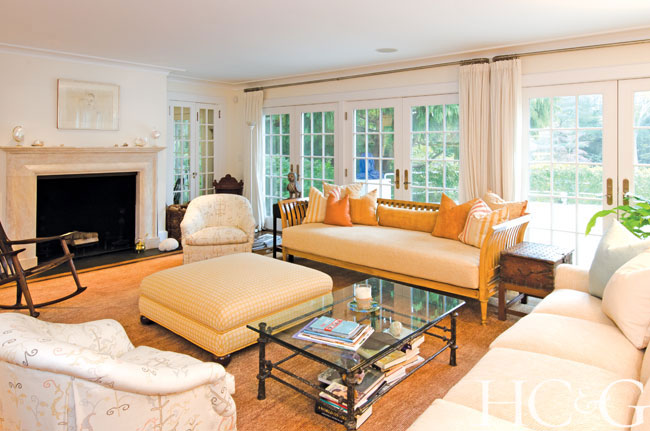 Consider decorator Mica Ertegun, who co-founded the interior design firm MAC II in 1967 with the late Chessy Rayner, a fixture in Manhattan high society who had been a fashion editor at Glamour and Vogue. The daughter of a Romanian diplomat, Ertegun is a card-carrying member of the social swirl, as was her husband, the late music mogul Ahmet Ertegun, founder and president of Atlantic Records. The Erteguns traveled in circles that gave them access to clients with the income to afford grand-scale decorating, and for many years, they hosted lavish parties at Boatman House, their luxurious waterfront estate on Halsey Neck in Southampton.

Upon founding MAC II, Ertegun and Rayner took the design world by storm, quickly becoming not just sophisticated socialites, but in-demand international interior designers, attracting clients such as Keith Richards, Carly Simon, Henry Kravis, Michael and Jane Eisner, and Princess Firyal of Jordan. They were known for serene, uncluttered, elegant rooms, accessorized with unique finds from their global travels. “People in the Hamptons want something beautiful and comfortable,” says Ertegun. “Creating privacy is also very important for my clients, who spend so much time in the city.”

A prime example of the pair’s work, an East Hampton estate near the ocean in Georgica, is now listed for $10.5 million. The property includes a 5,000-square-foot house, a two-bedroom cottage, a pool, and lush gardens. The classic cottage-style home has the kind of open living and dining rooms where kicking up one’s heels is expected, and there’s no chance a butler will appear anytime soon. “It’s personal but tasteful, and feels like someone actually lives there,” says Saatchi, who has the listing. “The hallmark of a good designer is a house that looks like it belongs to the owner, not the decorator.”

Cuban-born decorator Waldo Fernandez first caught the eye of Hollywood royalty after working as an assistant set designer at 20th Century Fox in the 1970s. After establishing a showroom in Los Angeles, he landed his first big interior design job, for film director John Schlesinger, and has since decorated for such Tinseltown bigwigs as the late Elizabeth Taylor and Brad Pitt and Angelina Jolie. 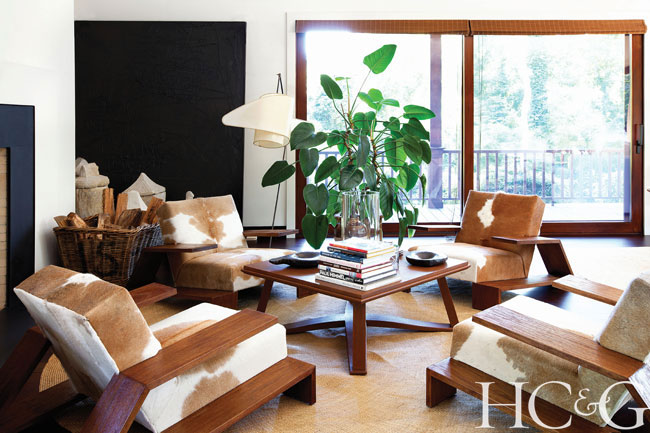 Now Hamptons house-hunters curious about how to live like a decorator have their chance: Fernandez’s own East Hampton contemporary is on the market. With the silken ambiance of a Thai temple, the 6,000-square-foot home includes a black granite–lined infinity pool and guesthouse set just blocks from the ocean. Centered on a lotus-filled pond with deep verandas surrounding the house on all sides, the compound is reached via a bamboo-lined drive and features a sky-bridge that leads from the main house to a music room and a combined media/living area complete with a massage room. Cee Scott Brown and Jack Pearson of Corcoran Group Real Estate are representing the property, listed at $9.5 million. 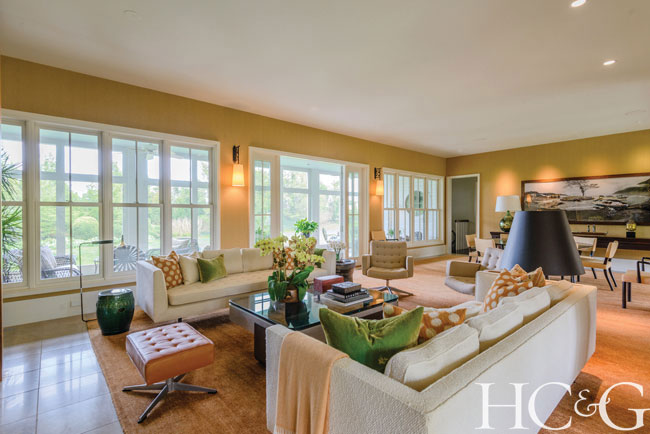 On Further Lane, another lovely home has just come on the market, this one dressed up by designer Scott Sanders, who lives here with his partner, power attorney Peter Wilson. Listed for $21.5 million with Patricia Wadzinski and Edward Petrie of Sotheby’s International Realty, the resort-like 3.2-acre property includes a 7,400-square-foot residence with five bedrooms, five full baths, and three partial baths, a terraced 50-by-16-foot gunite pool, a spa, a hidden tennis court, and a Japanese tea house–style pool house with its own kitchen, bath, and gym. Wilson purchased the traditional shingled home ten years ago, before meeting Sanders, who has graced the interiors with his trademark classic furnishings and colorful accents.

“We’re homebodies,” says Sanders, who was the lead designer of Ralph Lauren Home before going out on his own. “We live right near the beach, but never get there.” The decor inspiration behind their secluded getaway? “Nautical mixed with Asian. Peter grew up in Taiwan and loves anything with Far East influences.” Sanders warmed up the sprawling space with fabrics and wall coverings in multiple textures and different themes for the bedrooms—one mid-20th-century, one Chinese, and one Palm Springs, all boldly swathed with decorative wall treatments from design firm Phillip Jeffries and East Hampton–based Elizabeth Dow.

Longview, the 15,000-square-foot hilltop estate in Water Mill, has almost everything money can buy, and then some: nine bedrooms, nine full baths, four partial baths, a double-entry 52-foot-long pool, a pool pavilion, a home theater, a painting studio, and a sunken tennis court, all on 4.3 acres with views of the ocean. At $13.5 million, it’s practically a bargain. (Deborah Srb of Sotheby’s International Realty has the listing.) Designer Tom Fleming, a partner with the late Keith Irvine in Irvine & Fleming for almost 50 years, has a long relationship with the current owners. “I’ve known them more than 30 years, and we’ve done many projects, from office spaces to a home in Southampton,” says Fleming, who complemented the house’s custom-crafted elements with an array of vibrant upholstery fabrics.
Eyesores Galore

The East End is full of creative types who love to express themselves, but doing so on private or even commercial property is often cause for controversy. To wit: the case of Jerry Della Femina, a few pumpkins, and some hay bales. In the early 1990s, the famed ad man fought a prolonged court battle over his “unauthorized use of pumpkins”—a display of the gourds he placed on hay bales in front of his Red Horse Market. The Town of East Hampton requires a permit to put “a sign” on commercial property (yes, the pumpkins were deemed a sign). Della Femina had already received three citations for other unauthorized signs—one that said “Half Off Flowers and Plants,” another that announced “Pumpkins, 29 cents a pound,” and a third that read “We’re Open.” After being handcuffed and taken to court, Della Femina fought the charge, won, and then sued the village.

Gallery owner Ruth Vered stands her ground when it comes to public displays—literally. Striding alongside the home she shares with partner Janet Lehr on Madison Street in Sag Harbor is Larry Rivers’s giant Legs, a 16-foot-high sculpture installed in 2008. Needless to say, the gams got noticed and sparked a semantic battle over what’s “art” and what’s not when it comes to residential zoning. Village officials ruled that the sculpture is an ancillary structure and doesn’t meet zoning setback requirements. An ongoing court battle ensued, and for now the legs are staying put. 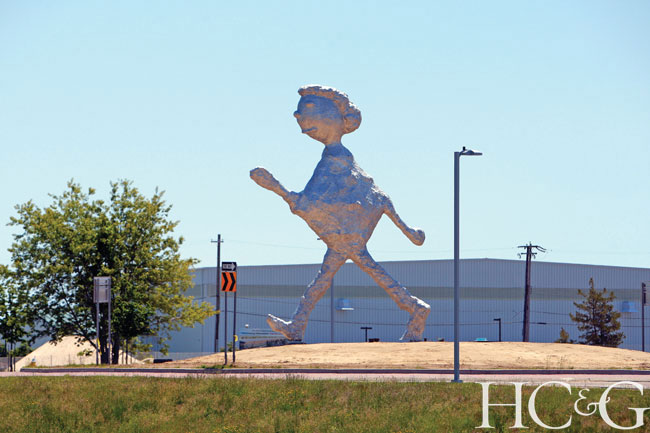 Another tall drink of water has strolled into our area. The Walking Figure, a 30-foot-high aluminum sculpture of a woman, is spurring debate at Francis S. Gabreski Airport in Westhampton Beach. Rechler Equity Partners, which is creating a Hamptons Business District on vacant county-owned land there, put up the 5,000-pound sculpture in early June, decreeing that it will be “another piece of iconic artwork added to the landscape of the East End.”
The takeaway from these tales? An avant-garde artist who really wants to make waves in the Hamptons should create a long-legged, pumpkin-holding goddess sculpture and park it at the nearest farm stand.

A version of this article appeared in the August 1 2014 issue of Hamptons Cottages & Gardens with the headline: Designer Genes.