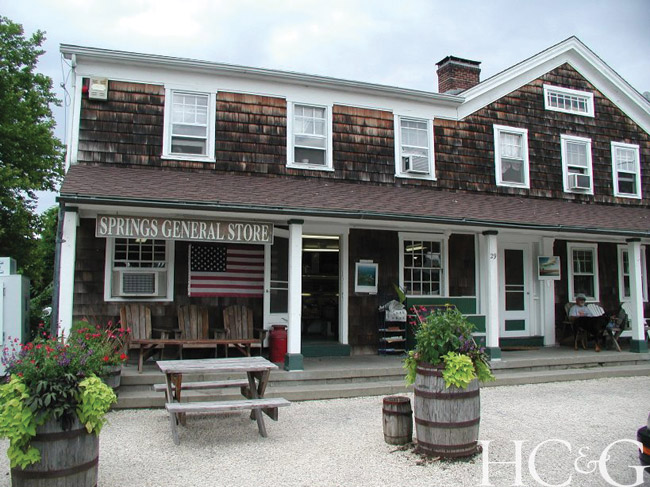 There was a time when Bobby Van’s was home to regular customers like Truman Capote, James Jones, and George Plimpton; artists like Willem de Kooning rode around town on a Royce Union three-speed bicycle; playwrights like Wendy Wasserstein penned The Heidi Chronicles in a Bridgehampton carriage house; and Jackson Pollock traded paintings for food at the Springs General Store.

Needless to say, these days you’d be hard-pressed to see the management at Citarella swapping free-range chickens for bucolic landscape paintings. While the Community Preservation Fund was established to conserve land on the East End, there is no protection in place for the struggling artists who have drawn inspiration from the Hamptons for nearly two centuries. 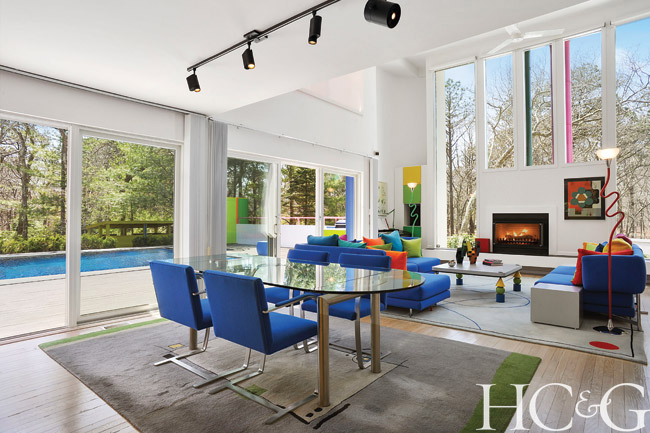 Even if the artistic idyll is within your reach, don’t count on renovating an old potato barn or fisherman’s shack into the studio of your dreams. The Town of East Hampton, for example, has many restrictions on freestanding studio and accessory spaces in order to prevent overcrowded living. Best for an artist to be grandfathered in, such as Ernst Lurker, a founder of the Play Art movement (think interactive 3-D pieces, like slides and rooms full of colorful balls). One day a code enforcer showed up at Lurker’s doorstep on Bull Path unannounced, simply to confirm that the art studio above his two-car garage did not include a toilet. The code for a detached artist’s studio in East Hampton allows for a “slop sink,” but no toilet or shower. No sleeping or cooking is permitted either, just a coffeepot and microwave to keep starving artists from, well, starving.

The town board requires artists to provide considerable documentation before granting them permission to build—and it’s not just name, address, phone, and medium of choice. Be prepared to describe your work, supply a résumé, offer official accreditation proving you are a working artist (photos, exhibition announcements, catalog reviews), and produce three letters of reference.

While traveling back and forth from his house and studio when nature calls has been an inconvenience of sorts, Lurker has enjoyed three decades of creative life on the East End, though he and his wife have recently decided to move to Spain, listing their four-bedroom, three-bathroom home on two acres with Sviatlana Karnei of Douglas Elliman for $2.9 million. Bright pops of color appear throughout the all-white house—such as the tangerine Sub-Zero fridge and a blue cooking grill on the deck. “Color is an expression of joy, and my artwork incorporates a lot of it,” says Lurker, whose work is included in the collection of the Museum of Modern Art. “Most people who visit say, ‘You cannot be unhappy here!’” There’s a reason he calls it the Playful House. 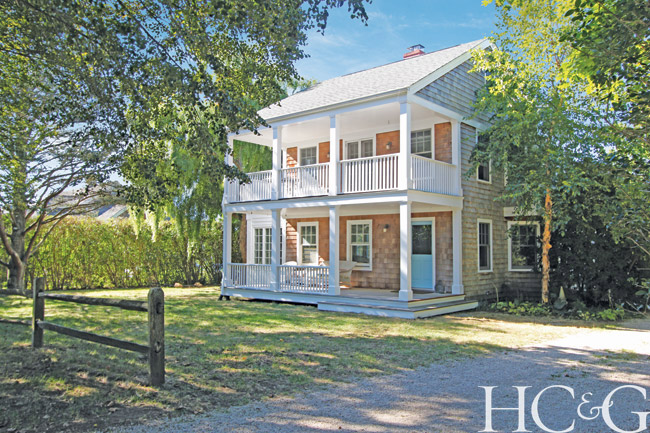 Not far away from Lurker’s place, just a few hundred feet from the Atlantic on a quiet lane in Amagansett, a renovated circa-1900 home has been an inspiring canvas for artist Perry Burns and his wife, Jolie Parcher, who owns Mandala Yoga. After purchasing the house in 2003, Burns was hands-on in its renovation. “We’re both creative people and love taking on projects that we can make into our own,” says Burns, who employed multiple materials and textures throughout: cement and/or brick countertops, walls, and benches, as well as colorful hanging sconces and chandeliers that look like giant floating gems. The couple also added the requisite yoga studio with views of the ocean off the master bedroom.

“I’m a painter and a photographer, and even though I work in two dimensions, I always think in three-dimensional terms,” adds Burns. “Similarly, I think of the house as a sculpture.” The four-bedroom, three-bathroom home, listed for $3.385 million with Krae Van Sickle and Lylla Carter of Saunders and Christopher Dubs of Halstead Property, also includes a detached two-car garage that has been converted into—you guessed it—an artist’s studio.

The couple has purchased an old farmhouse nearby, with the intention of renovating it. But this time around, creating a separate studio space will be more of a challenge. “Unfortunately, there are so many restrictions on having studios now,” says Burns. “I’ve been out here 20 years, and there are more limitations than ever on the size of an artist’s studio and what you can have in it.”

Whale of a Sale

Formerly known as the Un-Hampton, Sag Harbor is now the Up-Hampton, like it or not. Corcoran Real Estate reports that sales in the village rose 135 percent in first quarter 2014 over the same period last year, with median prices rising 60 percent, to $1.18 million from $740,000. The sale of the historic Nathan P. Howell House on Main Street—for $9.75 million—set a new record in the village and raised the bar even higher. Howell, one of the village’s most prominent whaling scions, built the home in 1833; it went into contract within a month of being listed.

According to Corcoran’s Gary DePersia, who represented both the seller and the buyer, the sale was “a record price not only for Sag Harbor, but for a one-acre property north of the highway that’s not on the water. The house is magnificent, with glorious parlors, high ceilings, wide hallways, and a widow’s walk with 360-degree views. And you can walk to the American Hotel.”
So what’s making Sag Harbor the hottest Hampton right now? “If you go to dinner at Nick & Toni’s, what do you do when you leave? You get back in your car and go home,” suggests DePersia. “But people like the small-town feel of Sag Harbor, where they can sit outside and take a walk after dinner. It is the most vibrant town at night in the summer, and people just want to hang out there.” 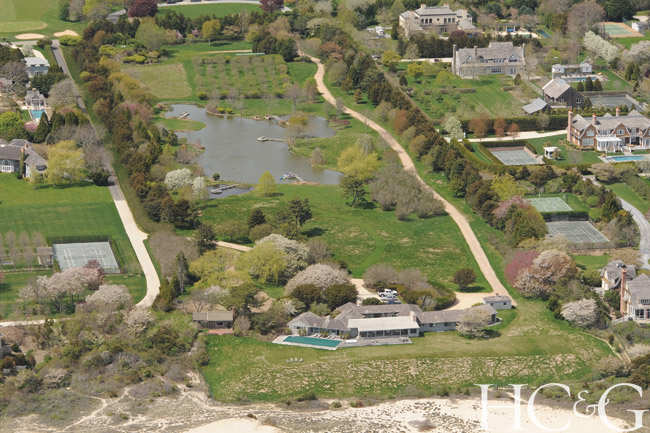 FSBO: $147 Million
Everyone is familiar with the occasional tattered for sale by owner sign, usually attached to a shack. But no such sign was stuck in the lawn at 60 Further Lane in East Hampton, an 18-acre property that just sold for a record $147 million—without any broker involvement. The price paid by the buyer, Jana Partners hedge fund manager Barry Rosenstein, is nearly double last year’s $75 million sale of the 11-acre Wooldon Manor in Southampton and the highest ever for a private residence in the U.S. Yet there was no real estate agent buying everyone a round of drinks at the Palm afterward. Most sellers figure out their bottom line and then add a 6 percent commission to determine their asking price. In this case, the broker commission would have been $8.82 million, which would get you a perfectly reasonable house in the Hamptons—though probably not on Further Lane. The property, which includes formal gardens and a pond, was previously the home of Christopher H. Browne, managing director of the Tweedy, Browne investment firm, and his boyfriend, architect Andrew Gordon, who designed the main house. Browne died in 2009 and left the estate to Gordon, who lived there until his death last fall. 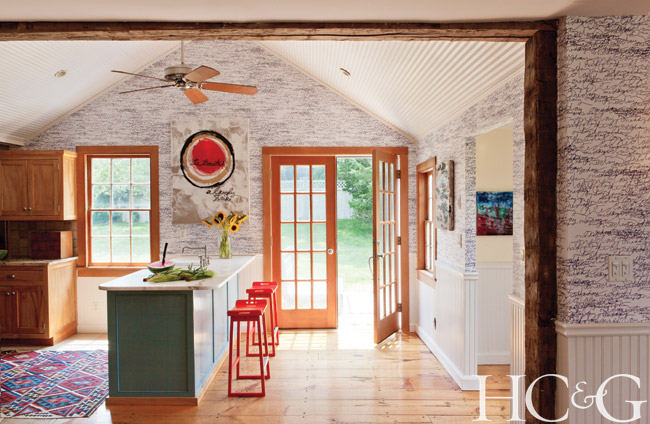 If Walls Could Talk: The ARTed House
When property developer Bryan Graybill bought a former bakery in Wainscott in 2009, he “had a hard time getting my head around preserving it and also updating it with modern amenities, since it had been in the same family for a few hundred years.” So why rush? Instead, last summer Graybill pursued an idea he had been mulling over for some time: use the historic cottage for a temporary art installation. In just six weeks, L.A.-based artist Cole Sternberg painted 22 canvases and covered the walls of the entire “ARTed House” in a wallpaper of his own design, with the words “one day” written more than 1,000 times. One Day is an homage to Ray Johnson, one of Sternberg’s favorite performance artists, who jumped to his death from the Sag Harbor Bridge in 1995. When the installation opened during ArtHamptons, gallery owners and collectors who toured Graybill’s project bought $250,000 of Sternberg’s work in one evening. The moral of the story: There’s no place like home. And one way or another, Hamptons real estate always returns on its investment.

A version of this article appeared in the July 1, 2014 issue of Hamptons Cottages & Gardens with the headline: Deeds & Don'ts.

While the circa-1928 estate paints a rosy picture with its grand spaces and gardens, the scandal that engulfs it is anything but.

Listed for the first time since the 1970s, the home has played host to figures like Barbara Walters and Frank Gifford thanks to its late owners.