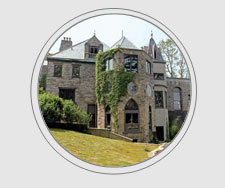 Does this circa-1882, 20-room castle look familiar? Maybe that’s because the towering Yonkers home—of museum curator Kohle Yohannan, who is fashion designer Mary McFadden’s ex-husband—has been featured in the movie Mona Lisa Smile and as a photo-shoot backdrop for Vogue and Chanel. Story goes that seller Yohannan purchased Greystone Court in 2001 for $469,000, then took great pains to renovate its grand interiors, which include six bedrooms, seven bathrooms, a wine cellar, a tea salon and a private chapel with elaborate stained-glass panels. Charlotte Wagster of Prudential Douglas Elliman Real Estate has the $4,950,000 listing. (646) 342-6281.

With innovation as our theme, we began by looking back to innovators of the last century, the modern architects who created more than just a new look. Philip Johnson and his peers invented a new way of living—in open-plan, light-filled spaces that favor views onto nature over man-made ornamentation. A trio of listings exemplify this aesthetic, including the mid-century architect Hugh Smallen’s family home; the so-called System House, designed by John Black Lee; and a Madison property that boasts not one, but two additions by Johnson. We also found antique homes that offer innovative approaches to design—with cool renovations—as well as newer-construction properties both in Connecticut and Westchester. Here, six summer listings that are both forward-thinking and fabulous. See you in September!

One of the grandest listings in all of Westchester, this 18,000-square-foot home sits on the highest point in Conyers Farm, the 1,500-acre enclave that straddles the Connecticut and New York state line. Sited on nearly 14 private acres in Armonk, the house was designed by New Canaan–based Wadia Associates in the style of a European manor to include such luxe features as a reception hall with French limestone floors and a skylight, a conservatory, a 2,500-bottle wine cellar and an orangerie. There’s also an indoor pool (with a second pool outdoors), a master suite with a sitting room, and a home theater. Brian Milton, (914) 469-9889, and Peter Elebash, (917) 685-7303, of Houlihan Lawrence have the listing. 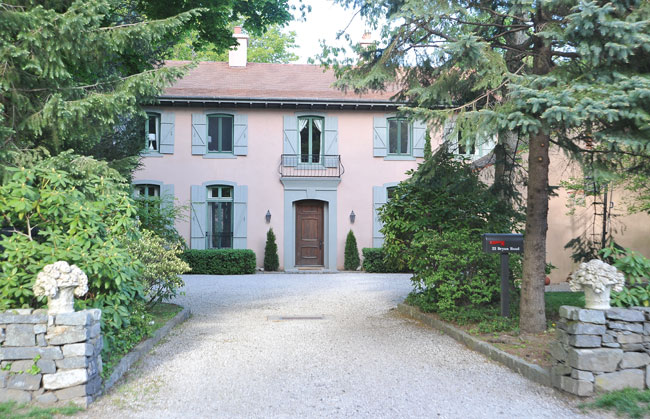 This Mediterranean-style villa in Rowayton has the coolest provenance we’ve run across in a long time. It was originally constructed in Sweden according to the exacting specifications of its owners then shipped in pieces to Rowayton, along with a team of Swedish builders. The designer Shaun Jackson now owns it—a daughter-in-law of the original owners—and has put her signature touch on the five-bedroom, 4,066-square-foot interiors. On the pretty, landscaped lot: a pool and pool terrace and a two-bedroom guest cottage. Meghan Gatt of William Raveis Exceptional Properties has the listing. (203) 904-8064. 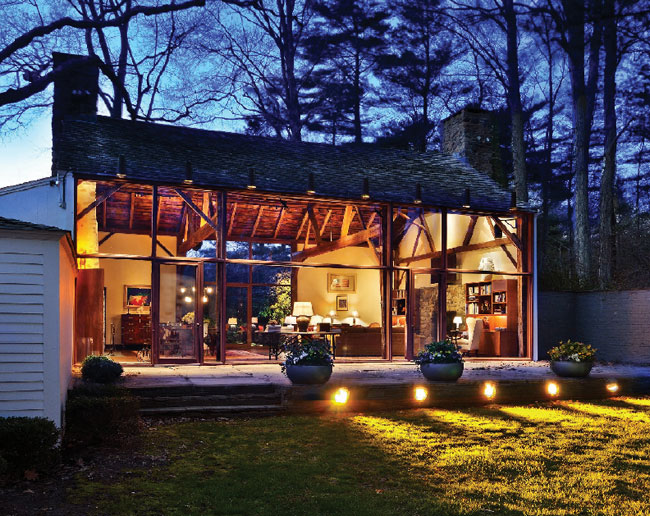 Rather like a gorgeous bridesmaid who upstages the pretty bride, this perfectly wonderful Madison antique can’t quite compete with its circa-1700 barn and guesthouse. In the smaller structure’s favor: Modernist master Philip Johnson designed its glass-room style addition that offers a transparent living and dining space with soaring ceilings, a massive stone hearth and window walls overlooking a koi pond on one side and gardens on the other. Built in 1720, the rest of the Tremaine Estate is pretty appealing as well. The 3,204-square-foot main house offers four bedrooms and three bathrooms (plus one half bathroom), plus yet another Johnson-designed glass room, this one with window walls that look onto the pool. Margaret Muir of William Pitt Sotheby’s International Realty in Madison has the listing. (203) 245-6700, ext. 202.

Here’s another Chichester Road home featured on the New Canaan Historical Society Modern House tour, this one built in 1956 by architect John Black Lee for himself and his family, then thoughtfully renovated by Toshiko Mori, a former chair of Harvard’s architecture department. It’s still known as the System House, for the way its appealing design relies on simple modules and lower-cost materials. Today, the 2,048-square-foot interiors are immaculate, featuring glowing bamboo flooring, a pristine kitchen and window walls that lead to multiple decks and bluestone patios, taking full advantage of the landscaped three-acre setting. The property also includes a three-car garage and a small studio. It’s listed with Inger Stringfellow, (203) 321-9361, and Susan Blabey (203) 979-7774, both of William Pitt Sotheby’s International Realty in New Canaan.

The hamlets and villages around Bedford and neighboring Katonah draw luminaries attracted to its sprawling antique estates: Martha Stewart and Richard Gere are on the list of the area’s celebrity renovators. Amidst the antiques are stunning contemporaries, too, like this circa-1988 property on 4.5 acres. With a cool glamour that looks somewhat more L.A. than East Coast, the 5,700-square foot home features a two-story entry hall, a sunken living room with a wet bar and master suite with a fireplace. In all there are five bedrooms and five bathrooms (and one half-bath), plus a free-form pool and ample terraces. Michael Neeley of Ginnel Real Estate in Bedford has the listing. (914) 234-9234, ext. 110. 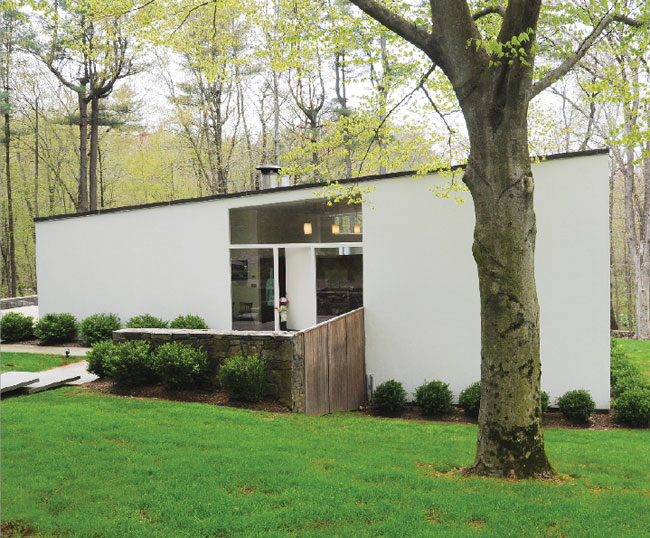 In 1957, modern architect Hugh Smallen built this house for himself and his family. Featured on this year’s New Canaan Historical Society’s Modern House Tour, the home is now one of a cluster of three Smallen-designed homes along wooded Chichester Road, close to Philip Johnson’s Glass House. Like the Glass House, it embraces exterior spaces, via a five bay-window wall looking onto a grand terrace. Current owners restored Smallen’s original great room, dining space and four bedrooms. It’s listed with Inger Stringfellow of William Pitt Sotheby’s International Realty in New Canaan. (203) 321-9361.

This article appears in the July 2011 issue of Connecticut Cottages & Gardens.