The 360 State Street apartments in New Haven are breaking new green ground. Powered by an on-site fuel cell that produces all the energy the building needs, it was constructed of recycled materials and features a half-acre green roof with rainwater harvesting, as well as electric-car charging stations. More awesome amenities: an outdoor pool and sundeck; a fitness center with a yoga studio and, coming soon, a co-op
with local and organic food. Still available to rent are a few of the three-bedroom penthouse units, all with fabulous views from their private terraces, some as large as 1,000 square feet. For more information, check out 360statestreet.com.

To celebrate the seventh anniversary of Connecticut Cottages & Gardens,
we’re dedicating this column to September’s seven most sensational listings. Competition was stiff, with a dozen fabulous homes vying for a spot—which we’ll take as a sign that owners of significant properties are forecasting a stronger selling season for the months ahead. Recent data support owners’ confidence, at least at the high end of the market. In Fairfield County for instance, spring sales volume for homes costing more than $2 million trended 17 percent higher, as compared to the spring of 2010. And in July, Greenwich posted the highest-priced waterfront sale in its history when an estate called Point of View sold for $39.5 million. Here’s  hoping that seven brings good luck to the following listings—and to the fall market across our state.

Just about any home on exclusive Sasco Hill is impressive, given that the road has views over Long Island Sound, Southport Harbor and the Country Club of Fairfield’s link-style golf course. But this one is the most impressive of all with 11 waterfront acres that include 450 feet of private beachfront and a pretty pool and pool terrace. Designed by architect Jason Chai and featured in Architectural Digest, the nearly 16,000-square-foot interiors are cool, white and airy, offering six bedrooms and six bathrooms, plus five half bathrooms. Fran Ehrlich of Sotheby’s International Realty in Greenwich has the listing. 203-249-5561. 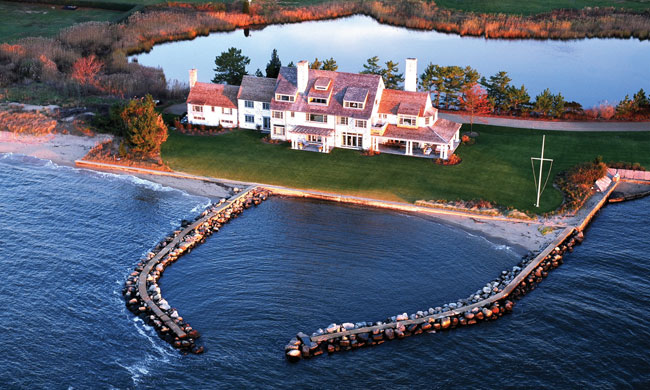 Built in 1939 in the seaside enclave of Fenwick, Katharine Hepburn’s English-style summer cottage was large—with three stories and 21 rooms—but not grand, according to “Kate the Great’s” own memoir. Rustic and homey, it once featured two refrigerators on platforms as a hedge against flooding and a secondhand stove, donated by her ex-husband. After the actress died at the age of 96, a Manhattan-based developer and his wife purchased the property for $6 million, then extensively renovated it inside and out. Today, a gorgeous new kitchen, relocated to take advantage of stunning Long Island Sound views, features a cobalt-blue Aga cook stove, a stone farmhouse sink, and custom cabinetry that hides appliances. There are six bedrooms (three suites) and seven bathrooms (plus one half bathroom), including a master suite with a fireplace and expansive views over the Sound. Coffered ceilings and fireplaces are found throughout the home. And as a more effective (and attractive) hedge against flooding, the house was raised nearly six feet, making it appear statelier still. The $28-million asking price is for the entire property on the 3.45-acre grounds, which comprise three lots, each with private waterfront. The house on 1.47 acres is listed for $18 million. Colette Harron, who sold the home to the current owners, represents the property for William Pitt Sotheby’s International Realty. 860-304-2391. 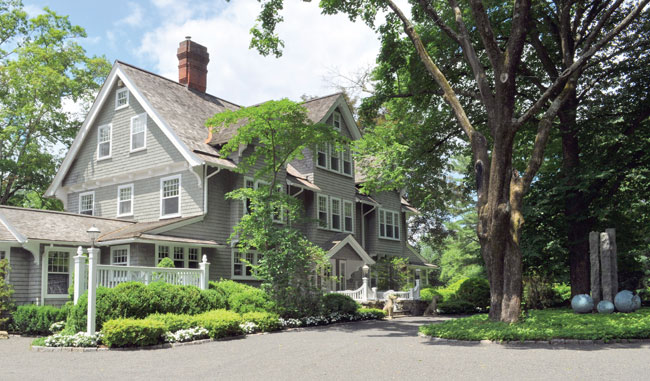 Architect Ehrick Rossiter was famous for his stately country manses, including The Boulders Inn in New Preston, and Rock House, which he designed for himself. Built in 1908 following the Tudor Revival style, Aglin Farm sits on 10 acres that now feature a Har-Tru tennis court, a swimming pool, a pond, a barn and a four-bedroom guest cottage. In all, the 7,900-square-foot home offers five to seven bedrooms, eight bathrooms (plus three half bathrooms), a gym, a paneled office, a sunroom and a wraparound porch. Stacey Matthews of The Matthews Group in Washington has the listing. 860-868-9066.

We’ve always loved this Pine Creek Avenue home, designed by architect Roger Ferris in 2002. Reminiscent of a lantern when lit up at night, the 2,789-square-foot contemporary has the kind of uncluttered, open-plan interiors that make it a perfect beach house: breezy, with vaulted ceilings and loads of light. It offers two bedrooms and two bathrooms (plus one half bathroom) and fantastic water views from its window walls and terrace. Brett Leiberman of the Riverside Realty Group in Westport has the listing. 203-226-8300. 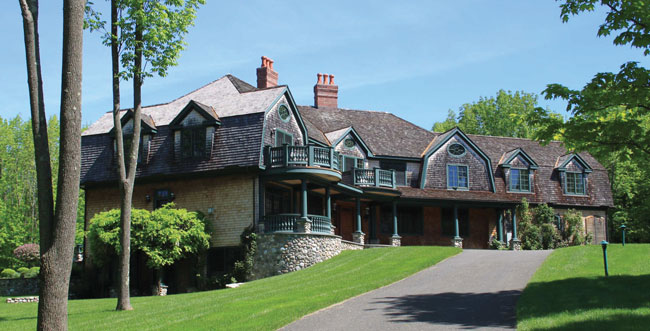 New to the Litchfield County market: the home of the late noted antiques dealer Wayne Pratt and his wife, Sarah Shinn Pratt, a former Sotheby’s auctioneer. The Pratts hired Connecticut architects Richard Merrell and Rick Moisan to create the 25-room estate in a style “reminiscent of the grand summer cottages built in the early 1900s,” says Pratt. Completed in 2004, the handsome stone-and-shingle exteriors feature a 35-foot front porch with views onto the property’s 61 hilltop acres. Inside, there are six bedrooms, each with its own bathroom, including a spacious master suite with a balcony, a den with a fireplace, as well as his-and-hers bathrooms and closets. Additional amenities on the lower level: a wine cellar, a media room, a game room and a fitness area. It’s listed with Sarah Pratt and Maria Taylor of Klemm Real Estate in Washington. 860-488-6635.

Bandleader Peter Duchin and Brooke Hayward are selling their Litchfield County home, a former cider mill built in 1800. The mill, which remained in operation until World War II, was converted into a residence, then served over the years as an antiques shop and bookstore. The couple renovated the home in 1992, retaining its lofty, barn-style features, including floor-to-ceiling windows, rustic beams and woodwork, and a massive stone hearth. Inside, there are two bedrooms and two bathrooms (plus one half bathroom). And on the 3.2-acre grounds: a waterfall that cascades next to the home. Carolyn Klemm of Klemm Real Estate has the listing. 860-488-6635.