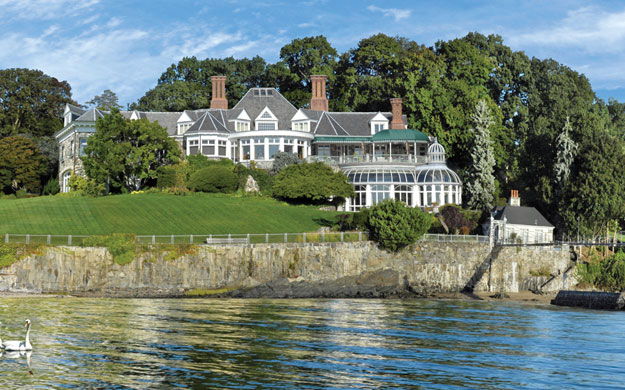 The words currently used to describe the housing sector that affects most of us—median-priced, single family-homes— are uninspiring: “flat,” “stagnant” and “muddling along.” Because adjectives like these give us a serious case of writer’s block, we thought we’d give you a peek into the sector that’s smoking hot at the moment: the highest of the high end.

The Telegraph of London recently reported that a penthouse in Monaco may have set the most-expensive-ever private-residence record, purchased for $308 million by a member of Dubai’s royal family. In Greece, an island called Skorpios that was once owned by Aristotle Onassis—indeed, was the site of his marriage to Jackie O—has reportedly been sold for $190 million to Giorgio Armani, whose bid beat out those of Bill Gates and Madonna.

Likewise and closer to home, we’ll start our monthly roundup with a couple of Connecticut’s super-high-end properties, followed by a few of our favorite, more reasonably priced options, from the Greenwich waterfront to the Litchfield Hills.

If you, too, were outbid on that Greek island, this Greenwich antique is not a bad Plan B. It’s called Point of View thanks to its spectacular site, in Field Point Park, on more than four acres with 340 feet of waterfront. This is an Old School estate for the way people of means used to live: there’s an atrium-style entry hall with 35-foot ceilings and a ballroom whose elaborate mosaic floor lowers to transform into an indoor swimming pool. Outside, there’s another swimming pool, a pool house, a dock, a guesthouse and a 4,500-square-foot carriage house with five additional bedrooms. Back inside the 20,777-square-foot main house, there are all the modern amenities as well: a fitness room, wine cellar, library and elevator. And you know that joke about buying the Brooklyn Bridge? This property actually includes a 175-foot suspension bridge designed by the guy who masterminded the Brooklyn Bridge, John Roebling. As for the home’s fabulous Old Masters paintings and antique furnishings, The Wall Street Journal reports that Sotheby’s will offer them to the public via auctions beginning in January. Point of View is listed with Joseph Barbieri of Sotheby’s International Realty in Greenwich. (203) 618-3112. 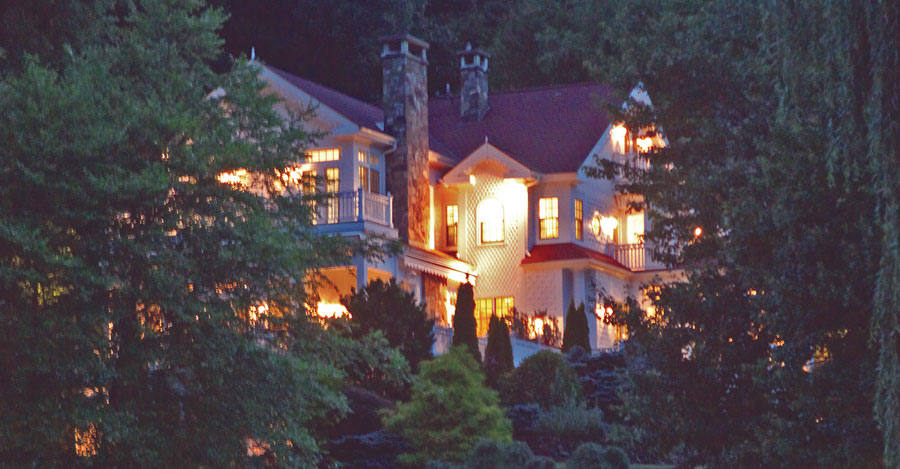 Set on 8.5 acres, this manse has one of the largest private beaches on Candlewood Lake, a lovely guest house and one of the most elaborate docks ever walked: embellished with a decorative pergola at water’s edge, it also features boat slips and a slide. The 6,100-square-foot, Victorian-style interiors offer every amenity we can think of: a wine cellar, a home theater, a fitness center, six bedrooms and seven bathrooms (plus one half bathroom). Sean Aikman of Litchfield Hills Sotheby’s International Realty in Kent has the listing. (860) 777-7434. 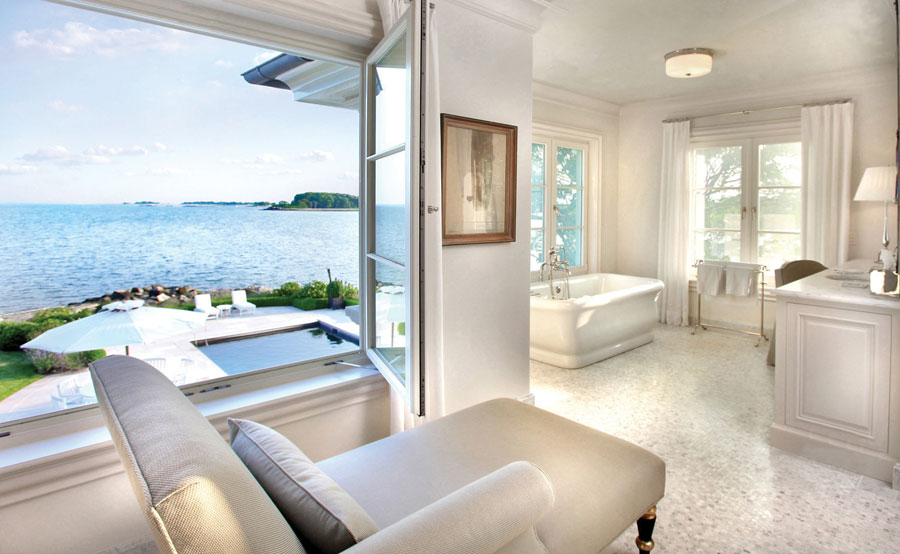 This 2008 home has awesome amenities for seafarers and landlubbers alike. Its best feature may be the site itself: There’s a grand, gated entrance, a waterfront pool and pool terrace, a deep-water dock and 130 feet of private Long Island Sound shoreline. The beautifully finished, 11,000-square-foot interiors are configured to showcase the sweeping Sound views. And although we’re hard-pressed to decide, the best place to take advantage of them may be from the freestanding soaking tub in the master suite—which also offers a balcony, fireplace and private access to the library. If you can pry yourself away from the master suite, we also recommend the handsome study with its Belgium Bluestone counters and bar, equipped with weather gauges to check before you set sail. The home offers seven bedrooms and seven bathrooms (plus two half bathrooms). It is listed with Michelle&Company, affiliated with William Raveis Exceptional Properties in Westport. (888) 454-7653.

Here’s a compound built for a music-industry executive, located on 8.5 private acres just a few minutes from Ridgefield’s charming village center. Music buffs will want to start the tour on the lower level, which features a professionally equipped recording studio, a sound room and a home theater, offering multiple screens and a bird’s-eye maple bar. While you’re down there, check out the wine cellar and the fitness room, with a spa-like bath and sauna. On the main level, the master suite also hits all the right notes, with its adjoining mahogany-paneled library and opulent master bath with a soaking tub and TV. In all, the nearly 15,000-square-foot interiors offer five bedrooms and six bathrooms (plus three half bathrooms). The grounds feature a gorgeous pool, pool house, pizza oven and putting green. It’s listed with Karla Murtaugh and Chip Neumann of Neumann Real Estate in Ridgefield. (203) 856-5534 and (203) 731-1411.

This circa-1941 Colonial presents itself as your picture-perfect New England estate. The first impression is a fine one: It’s sited at the end of a long drive on more than 3.5 landscaped acres. The 5,000-square-foot interiors were renovated but have retained their fantastic architectural details: a grand curved staircase, a barrel ceiling in the living room, wainscoting, and vintage French doors that open onto stone terraces. There’s also a lovely solarium with cathedral ceilings. It’s a great family house, as well, with five bedrooms, four bathrooms (plus three half bathrooms) and two family rooms. The grounds offer more family fun with its Sport Court, pool and pond. Rachel Walsh of William Pitt Sotheby’s International Realty in New Canaan has the listing. (203) 912-5908.

We have a special affection for this home, sited on three lovely acres: In 2007, this magazine devoted several pages of photographs to it, along with the story of its renovation. Built in 1910, the eyebrow Colonial was beautifully redone by Connecticut-based designer Susan Bednar Long after she purchased it as a weekend home in 2003. We say, if you can find a property that’s being sold by an architect or designer go ahead and buy it—you get the advantage of their good taste and access to the best materials and fixtures, along with a turnkey condition. This 2,589-square-foot home is no exception. It offers four bedrooms, two bathrooms and terrific spaces for entertaining, including a top-of-the-line kitchen, which opens onto a pretty stone terrace. Stacey Matthews of the Matthews Group, affiliated with William Raveis Real Estate in Washington Depot, has the listing. (860) 868-9066.

Bauhaus architect Marcel Breuer, one of the founders of the Modernist movement, built a handful of homes in the Litchfield Hills including this one, called Stillman II, now on the market for $3,795,000. On 9.5 private acres, the home features the best of Breuer: natural materials, including local stone, brick floors, stucco walls and, everywhere, clean lines and loads of glass to let the outside in. There’s also a pristine white cube that houses a guest room with a bathroom, as well as an outdoor mural attributed to Alexander Calder (who had a home in nearby Roxbury). Stillman II is listed with Roger Saucy of Klemm Real Estate in Washington Depot. (203) 788-7032.

Perched atop the original NYPD headquarters, this incredible penthouse with a newly discovered secret room is full of mystery and beauty.