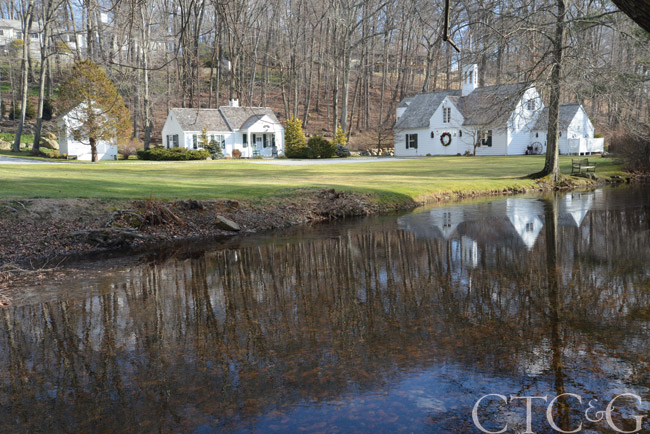 One of the snowiest Februarys on record meant the 2015 market got off to a slow start. But come March, brokers noticed a pick up in traffic, thanks, in part, to indications from the Fed that mortgage rates will increase sometime soon. Sellers, too, are starting to list their homes, which is “a wise move,” says Becky Walsh of William Pitt Sotheby’s International Realty. “They’ll have a leg up on sellers who are waiting until the grass is green and their gardens are in full bloom.” Here, a look at six spectacular listings, from a literary landmark in New Canaan to a Greenwich gem with its own three-hole golf course. 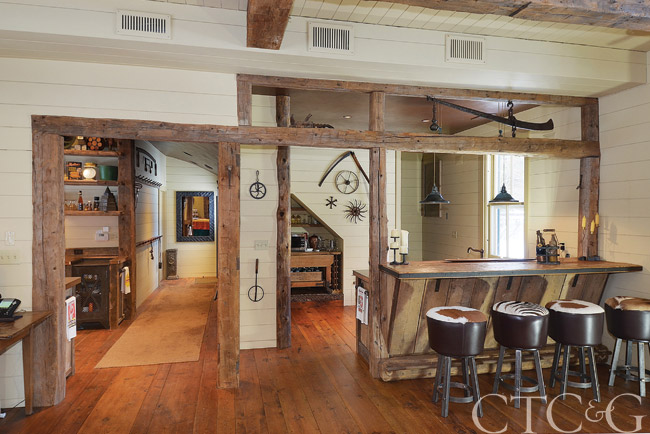 A River Runs Through it

Sited on the banks of the five miler river, yet still close to downtown New Canaan, the Lambert Farm compound offers 2.54-acres (bordered by 2.4 acres of land trust) with a terraced tennis court, pretty gardens and the coolest party barn in town. Its wide barn doors open onto an elegant great room with soaring ceilings, rustic beams and a wet bar. The silo now houses a round copper spa tub with radiant-heated walls. And there’s also a full kitchen and a game room with a billiards table. Renovations to the 4,803-square-foot main house make it a swell place for parties as well. The original kitchen now serves as a butler’s pantry, sited alongside a new kitchen with custom cabinetry, expansive islands, three Sub-Zero refrigerators, a Viking range, its own dining area (there’s a formal dining room as well) and walls of French doors opening onto outdoor terraces. In all, the home offers five bedrooms, four bathrooms, a wine cellar, a solarium and, on the grounds, a guest house and an artist’s studio. It is listed for $5,150,000 with Susan and John Engel of Barbara Cleary’s Realty Guild. 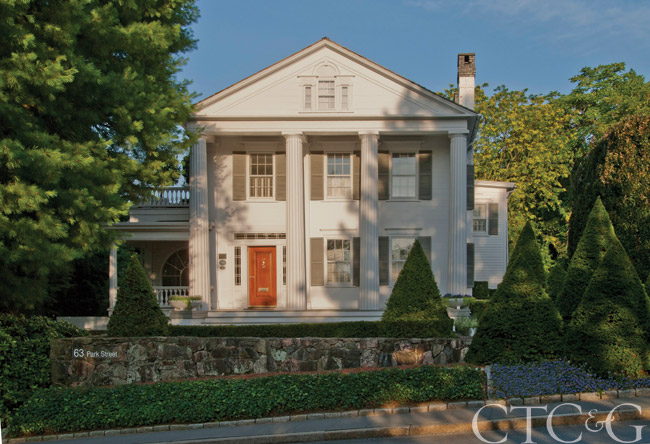 Sadly for your friends at this magazine, there aren’t very many editors who become household names. But back in the day Maxwell Perkins was famous for ushering in a new era of American literature, finding and corralling such writers as F. Scott Fitzgerald, Ernest Hemingway and Thomas Wolfe. In 1924, the editor and his family settled into a handsome, circa-1836 Greek Revival within walking distance of New Canaan’s town center—88 steps from the train station, as Perkins used to say. During the years when he was publishing novels such as The Great Gatsby, A Farewell to Arms and Look Homeward, Angel, Perkins also found the time to throw parties in the private gardens in back, now thoroughly modernized with terraced spaces, ornamental trees and outdoor rooms for both entertaining and solitude, which have garnered awards from the American Society of Landscape Architects. The 5,700-square-foot interiors have been modernized as well, now resembling Manhattan loft spaces with their open-plan rooms, sculptural staircases and dramatic skylights. The historic home is listed for $3.5 million with Inger Stringfellow of William Pitt Sotheby’s International Realty. 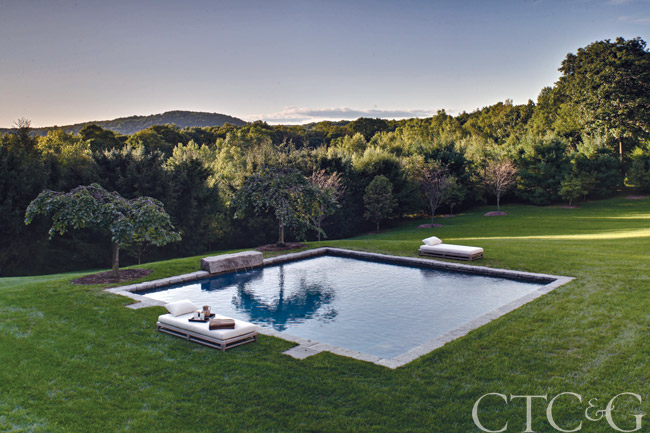 Along The River & Into The Woods

Directly down the Five Mile River in Rowayton, we’re crushing on the much-modernized, circa-1834 George Cudlipp House. The renovation preserved the antique beams and cladding and completely reconfigured the 3,298-square-foot interiors, now designed along an open plan to take advantage of the views onto the water. It also offers four bedrooms with vaulted ceilings, a new kitchen that opens onto a family room with a stylish hearth with a weathered-wood surround, and two bathrooms (plus one half bathroom). Karen Clifford of Coldwell Banker has the $2.5 million listing. 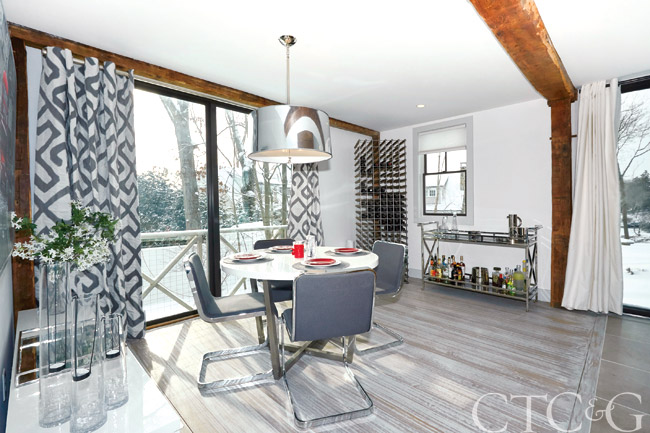 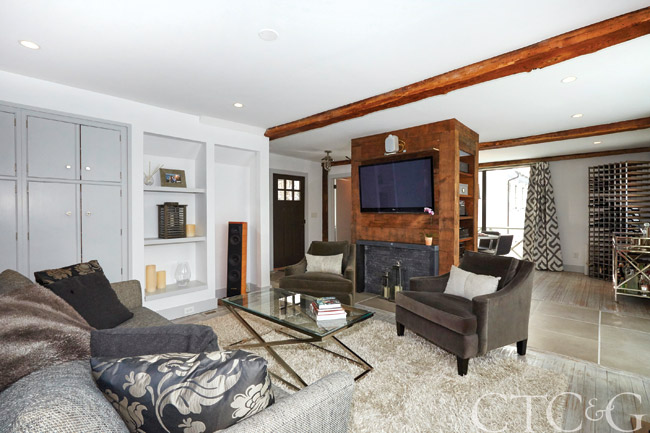 The results of another cool renovation project are for sale in Washington: The McIver Morgan design team of Rod Pleasants and Steve Godwin teamed up to thoroughly reimagine a modest circa-2010 home, their private residence, which they’ve just listed for $4.2 million. At the heart of the private compound is the main house, which opens onto a new barn-style great room with lofty, beamed ceilings, a massive stone hearth and walls of French doors with views onto the terraces and lawns. There’s another hearth in the new kitchen, which features similar rustic-beamed ceilings, a restaurant-quality stove and a dramatic, antler-style chandelier. And on the nearly seven-acre grounds, there’s a chic swimming pool with breathtaking vistas and a relocated barn, now serving as a garage. Carolyn Klemm of Klemm Real Estate has the listing. 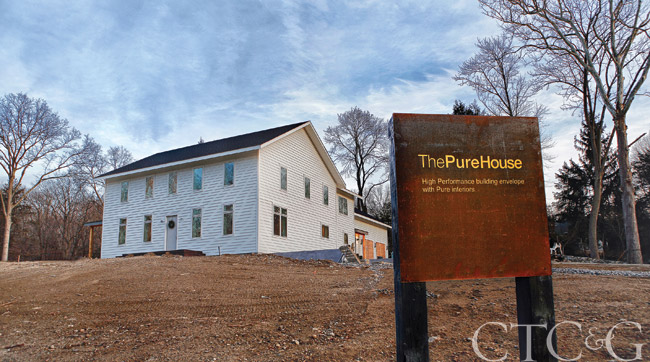 Just in time for Earth Day, Westport can now boast a Pure House, developed by Westport resident Doug McDonald, who’s made a name for himself building eco-friendly homes adhering to principles developed by Germany’s Passive House Institute. A few of the principles applied to the nearly 6,000-square-foot residence include its siting, oriented south for maximum sunlight, and an air exchange system that filters fresh air from the outside. McDonald chose building materials with the lowest-possible toxin levels (no chemically treated wood or insulation materials, for instance), and whenever he removes trees or rocks from the grounds, he tries to repurpose them: Dining room benches, for example, are to be constructed from felled oak trees, with other materials sourced locally. “It’s like the farm-to-table movement, only with building materials,” McDonald told Modern Farmer magazine, who says a Pure House can be up to 80 percent more energy efficient than a conventionally constructed home. It’s listed for $2.8 million with Jeannette Dryburgh & Associates, affiliated with William Raveis. 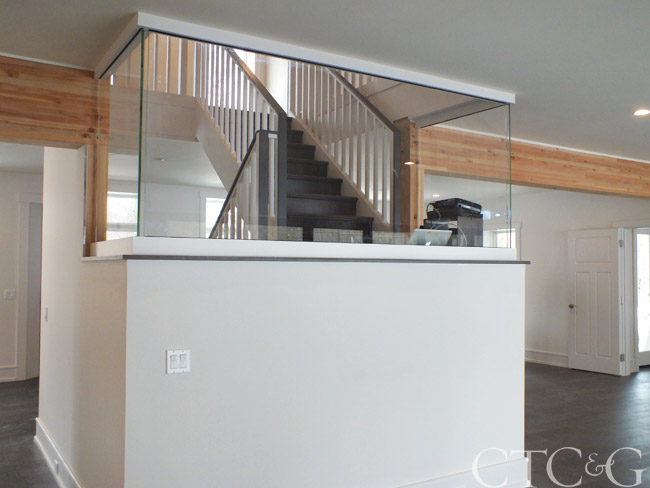 A version of this article appeared in the April 2015 issue of Connecticut Cottages & Gardens with the headline: Deeds & Don'ts: Early Bloomers.