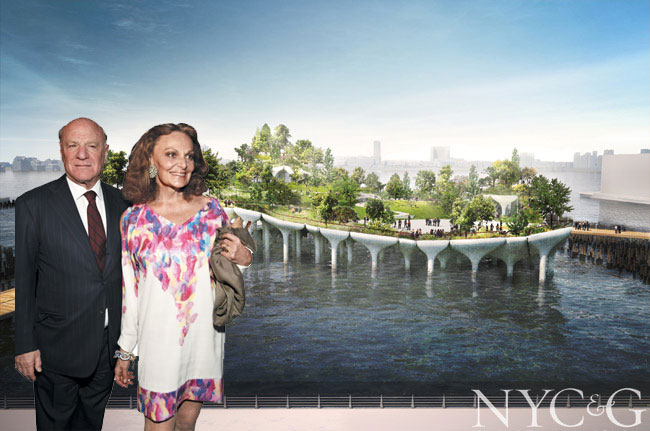 From the wrap dress (her) to the Home Shopping Network (him), power couple Diane (that’s “Dionne” to her friends) von Furstenberg and Barry Diller made their fortunes turning farfetched but impossibly simple ideas into reality.

The pair, who were fixtures at Studio 54 in the 1970s and married in 2001 after decades of friendship (he gave her 29 loose diamonds in a Band-Aid box for her 29th birthday), have evolved from young entrepreneurs out on the town to New York power players. Both successful in their respective businesses, they have also become formidable real estate titans, particularly on downtown Manhattan’s west side, where they were early supporters of the High Line.

Their current pet project: Pier 55, announced late last year by the Diller–von Furstenberg Family Foundation (DVFFF), whose philanthropic endeavors focus on civic affairs, education, the arts, and the environment. If it is ever built, “Treasure Island,” as it was nicknamed by Adrian Benepe, senior vice president and director for city park development at the Trust for Public Land, will be a lush 2.7-acre park and performance space floating atop a cluster of columns in the Hudson River near West 14th Street. The plan has met with much enthusiasm, though dissenters at a recent Community Board 2 meeting called it “visually insulting” and “Times Square offshore.”

The couple’s latest brainchild is being designed by Thomas Heatherwick (London’s 2012 Olympic Stadium) and landscape architect Mathews Nielsen (whose firm helped create some of Battery Park City’s green spaces), with an anticipated budget in excess of $130 million (the city of New York is to kick in $17 million, with the balance to be paid primarily by von Furstenberg and Diller’s foundation). The idea behind Pier 55, according to DVFFF, is “to improve the Hudson River parkland” by creating community green and performance space and to “properly honor its waterways,” von Furstenberg says.

If completed, Pier 55—which faces a host of environmental and engineering signoffs before construction can begin in 2016—would contribute substantially to von Furstenberg and Diller’s vast reach in the world of real estate. Von Furstenberg has been a presence in the West Village’s Meatpacking District since its streets were filled with more discarded carcasses than Manolos, first on West 12th Street in the early ’90s and then on Washington Street, where in 2006 she established her company’s headquarters in a pair of redbrick buildings. In 2007, Diller moved into his Frank Gehry–designed IAC Building headquarters just a few blocks north, on 18th Street and the West Side Highway. The couple famously maintain separate homes, she in a sculptural twisted-glass aerie, designed by WORKac, that sits atop her offices, he in prewar Upper East Side splendor in an apartment at the Carlyle. They travel the world together on his 305-foot-long yacht, Eos, which is one of the largest private sailing vessels in the world. On Coldwater Canyon Drive in Beverly Hills, they live in his longtime home, where a grassy lawn often plays host to a star-studded picnic during Oscar weekend. Von Furstenberg separately owns Cloudwalk, a 19th-century home on 100 acres in bucolic New Milford, Connecticut, and an apartment on Paris’s Left Bank. Now, with Pier 55 possibly splashing down soon in the Hudson, they just might be the most glamorous real estate mavens on the planet.

Why buy when you can rent? With the proliferation of new condo developments creating uncertainty for upper-echelon buyers—and on the heels of news that the 39th-floor apartment at the Pierre hotel is on the rental market for $500,000 a month—it’s a question more affluent city residents are asking. According to Zillow, New Yorkers spent more than $50 billion on rent in 2014, a 3.6 percent increase over 2013. The adage that those who can’t afford to buy become renters no longer holds true: The super-wealthy are renting apartments for astonishing figures—like Robert De Niro, who leases a 35th-floor combination unit at 15 Central Park West for $125,000 a month (Alex Rodriguez once rented part of the apartment for $30,000 a month, pre-combo, a comparative steal). It works in reverse, too: Leonardo DiCaprio is renting out the unit he owns at 66 East 11th Street for approximately $35,000 a month, and after buying their $14 million, 47th-floor condo at One Madison only a year ago, Gisele Bündchen and Tom Brady recently rented it out for about $40,000 a month. As absurd as these numbers sound, it’s not so crazy, according to some experts. “It costs about 10 percent in transaction fees to buy and later sell an apartment, which makes renting attractive if it’s uncertain how long one will live there,” notes Damon Liss, who runs a boutique real estate brokerage as well as an interior design firm. “Although a rental price of, say, $25,000 a month sounds like a huge number, a comparable apartment would cost about $8 million, which for a shorter term could easily exceed the cumulative rent 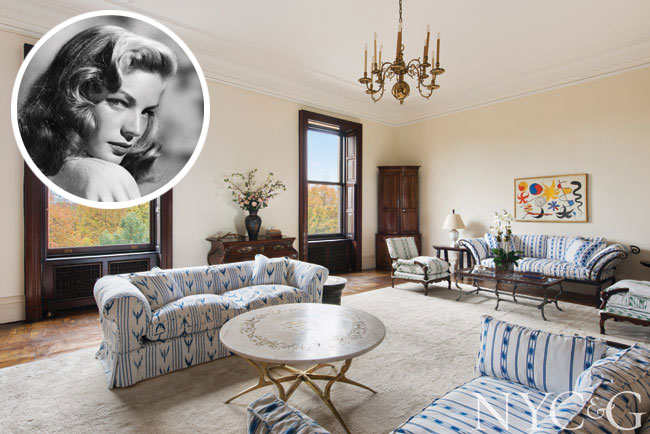 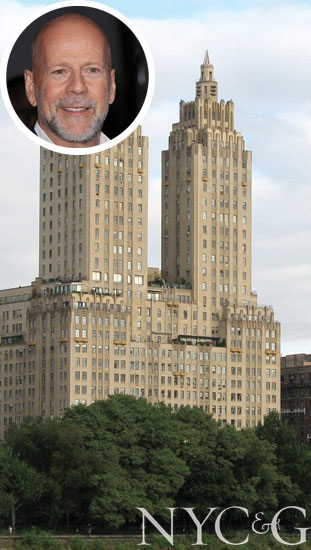 The passing of time might make some celebrities run for the Restylane, but a little age has others injecting pure profit into their bank accounts—by cashing in on savvy long-term real-estate investments. Almost a decade after buying his Tribeca home, talk-show host Jon Stewart recently sold it for three times what he paid: The 6,000-square-foot penthouse—with 2,000 square feet of outdoor space—at 161 Hudson Street went for $17.5 million in an off-market transaction. Let’s hope actress Noelle Beck (As the World Turns, Loving) sees a dramatic ending to the tale of her townhouse at 243 East 17th Street: Beck bought the seven-bedroom stunner—listed for $16.995 million—for $1.6 million in 1997. Uptown, Lauren Bacall’s longtime home at the Dakota is listed for $26 million with Rebecca Edwardson of Warburg Realty. The late actress bought the nine-room residence, which features uncommonly high ceilings and overlooks Central Park, in 1961 for $48,000.

Some stars are notoriously fast on their feet: Take Bruce Willis, who recently sold his fourth-floor, three-bedroom apartment at 300 Central Park West for almost $13 million, realizing a $4 million profit. He purchased the El Dorado co-op less than two years ago from U2’s Adam Clayton and reportedly had spent hardly any time in the place. It sold after less than two weeks on the market, and now he’s in contract to buy a 6,000-square-foot pad just down the street at 271 Central Park West (asking price: $16.995 million). He and wife Emma Heming just had a second child and have also plunked down around $12 million for a 22-acre spread in Bedford. Die hard . . . buy and sell quickly 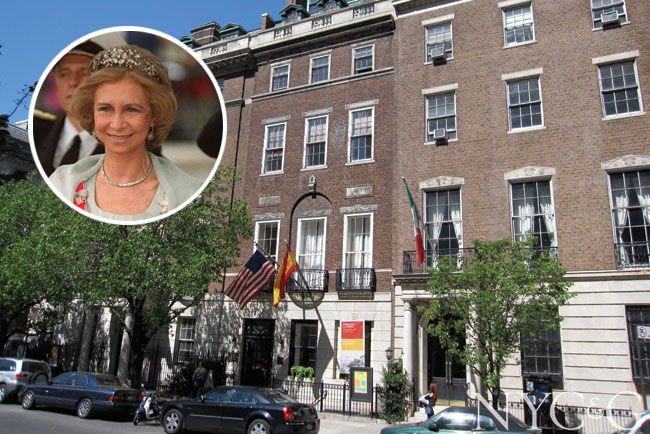 Say ¡hola! to the most glamorous listing on the Upper East Side: 684 Park Avenue, a 26-foot-wide mansion between East 68th and 69th streets that for the last 49 years has been home to the Queen Sofía Spanish Institute, a nonprofit founded in the 1950s to promote awareness of the Spanish-speaking world. In 1926, Manhattanites Percy and Maud Pyne commissioned architectural firm McKim, Mead & White to build an 11,000-square-foot Neo-Federal stunner on land adjacent to the Pynes’ home at 680 Park Avenue (now the Americas Society). The new residence was the couple’s wedding gift to their daughter Mary Pyne and son-in-law, Oliver Filley. (Sure beats a Cuisinart!) A subsequent owner, Margaret Rockefeller Strong, the Marquesa de Cuevas de Larrain, donated it to the Queen Sofía Spanish Institute, which recently ceased operating programs there and is looking for a smaller space to call home.

Begging to be transformed back into an over-the-top single-family residence, the landmarked building has a huge marble foyer, a grand parlor with floor-to-ceiling windows overlooking the avenue, and a large garden terrace, and if converted would be one of only four single-family residences on Park Avenue today. “There are so few homes left in New York City with such classic, beautiful proportions,” says Elizabeth Pyne, a decorator for the venerable interior design firm McMillen Inc. and the great-great-niece of Mary Pyne Filley. Brokers John Burger, Lisa Lippman, and Gerard Moore of Brown Harris Stevens have the $48 million listing. 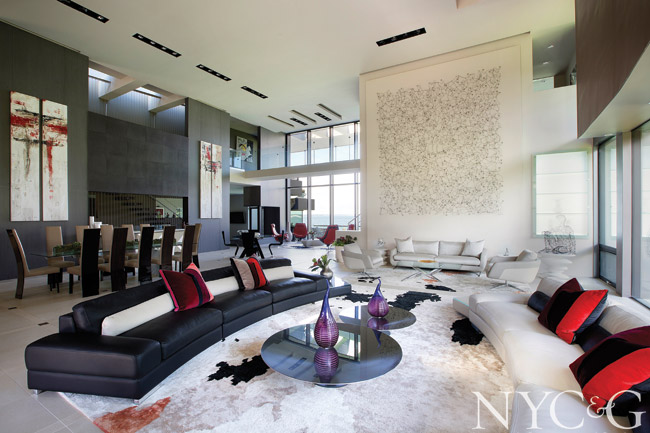 When people picture Long Island’s Gold Coast, the image that comes to mind is usually something straight out of F. Scott Fitzgerald. But there’s a fair share of glass and metal popping up among the area’s weathered stone and mahogany.

If Baz Luhrmann had gone all the way with his modernized take on Jay Gatsby, he might have set his story in the glass-walled mansion at 88 Old House Lane in Sands Point—currently Nassau County’s priciest listing, at $38 million. Nestled on four acres with a private beach, the year-old, 15,000-square-foot home was designed by go-to Gold Coast architect Stuart Narofsky for Sonny Chabra, chairman and chief executive officer of tech-consulting firm ASI System Integration. “Chabra spared no expense, filling the space with close to $2 million worth of Roche Bobois furnishings, which are included in the price,” says listing agent Shawn Elliott of Shawn Elliott Luxury Homes & Estates. House-hunting golf nuts will be especially drawn to the $100,000 golf simulator (which doubles as a home theater) and par-three golf course with a tee box on the roof of the four-story house. It’s a 110-yard shot to the green, with a pretty large water trap—Long Island Sound. Other amenities include basketball and racquetball courts, an indoor infinity pool, and a spa and sauna with an illuminated massage room. To sweeten the deal, Elliott is throwing in the services of a housekeeper, chef, and driver for one year, with the belief that an international buyer will scoop up the property. “At that price, it demands a staff!” he adds.

​Narofsky has also put a modern spin on a 1958 ranch at 1639 Cedar Swamp Road in Brookville, on the market for $1.799 million. “The homeowner wanted to use the back of the house for the entrance,” says listing agent Donnamarie Chaimanis of Laffey Fine Homes, “so Narofsky redesigned the whole house from the inside.” The back of the house is now the front, outfitted with a panel of large windows, and the interiors have been reconfigured with contemporary sustainable finishes and a geothermal heating and cooling system. The only thing that remains is the original brick fireplace.

A version of this article appeared in the March 2015 issue of New York Cottages & Gardens with the headline: Fantasy Island.