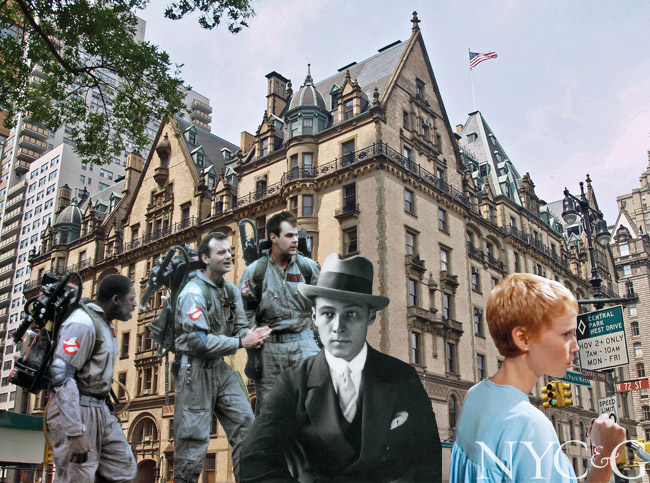 Ghoulish goings-on are not uncommon when it comes to real estate in the big, bad city. Predatory agents, surprise assessments, and untrustworthy superintendents can make urban dwelling a decidedly scary proposition. But nothing’s more frightening than the otherworldly spirits that some people believe live among us.

Several buildings around Manhattan are commonly thought to be home to the ghosts of tenants past. The Hotel des Artistes, at One West 67th Street, possesses a gargoyle-bedecked façade, a fittingly dramatic setting for the specter of playboy Rudolph Valentino. The odor of the silent screen star’s cologne is said to perfume his former studio in the 1917 building, which features several double-height ateliers with 19-foot windows and paneled living rooms. (A two-bedroom, one-bath apartment recently sold for its asking price of $1.995 million.) Even spookier, Valentino’s dashing image has reportedly been seen reflected in a hallway mirror.

When television journalist Anderson Cooper set about converting a historic fire station at 84 West 3rd Street into his private residence, he might not have realized it was already occupied—supposedly by the ghost of a firefighter who hung himself from the rafters in 1930, upon learning that his wife had cheated on him. Over the years, the man’s firefighting brethren have allegedly heard strange noises coming from the attic and even glimpsed an image of his hanging corpse.

The Dakota, at One West 72nd Street, is famously known for devilish delights, principally as the setting for the Roman Polanski horror movie Rosemary’s Baby, starring Mia Farrow. Residents have reported seeing a little girl dressed in turn-of-the-20th-century garb, an adult with the face of a young boy, and even the ghost of John Lennon, who was shot and killed outside his home there in 1980. Have no fear? A 4,500-square-foot Dakota apartment can be yours for $14.5 million, including four bedrooms and four exposures, but no views of Central Park.

The vibe is perhaps a bit more cheery at 55 Central Park West, the Art Deco jewel where the popular 1984 comedy Ghostbusters was set. A 3,800-square-foot, five-bedroom apartment is currently on the market for $14.25 million, though there’s no word on what’s inside the refrigerator. Yet another Manhattan property, 1107 Fifth Avenue—it was the setting for Devil’s Advocate, starring Al Pacino—fell under a hex of sorts a few years back when the president of its co-op board allegedly set out to sabotage the sale of the building’s ten-room penthouse triplex after her own offer was spurned. She reportedly persuaded the board to build a shared roof deck for all tenants on top of the penthouse, accessible only via the apartment’s 4,750-square-foot terrace. Needless to say, the charm quickly wore off for the Peruvian millionaire who was in contract to buy the place for $27.5 million (he later sued the seller for the return of his deposit). As of press time, the penthouse is no longer on the market and has never sold. Now that’s a real New York horror story. 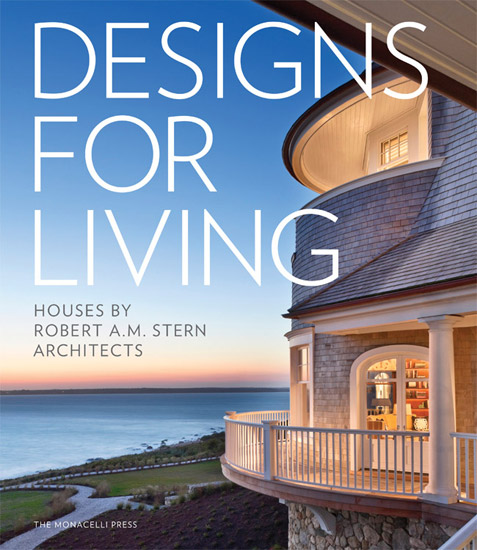 Let there be no imitators: Robert A.M. Stern and his eponymous firm are undoubtedly New York City’s most prolific—and most successful—designers of ultra-luxury homes, with sponsor-sale numbers that are far out-beaten by record-breaking asking prices on the resale market. For example, a 5,500-square-foot, six-bedroom home at the Brompton (205 East 85th Street), which was originally purchased for $8.583 million in 2009, is currently listed for $13.5 million, while a 2,300-square-foot, three-bedroom apartment at the Chatham (181 East 65th Street, where Stern himself maintains a home) is asking $5.95 million—a hefty markup from the original 2001 closing price of $1.6295 million. At Stern’s much-ballyhooed 15 Central Park West, buyers paid more per square foot for resales in 2013 than they did in any other building in New York ($5,636, to be exact, almost double the average per-square-foot ask for sponsor units in 2009).

The bespectacled architect, whose book Designs for Living: Houses by Robert A.M. Stern Architects by Roger H. Seifter, Randy M. Correll, Grant F. Marani, and Gary L. Brewer of Robert A.M. Stern Architects (Monacelli) was published in May, is proving to be the Energizer Bunny of new construction in New York. Plans for Vornado Realty Trust’s 64-story building at 220 Central Park South almost exactly echo Zeckendorf Development’s 51-story structure at 520 Park Avenue, not to mention Silverstein Properties’ Four Seasons Downtown (hotel and residences) at 30 Park Place in Tribeca, where many apartments are already in contract. So is Stern, who has designed them all, at risk of becoming ubiquitous? Not likely. At 75, perhaps he just wants to leave something for posterity. —R. M. 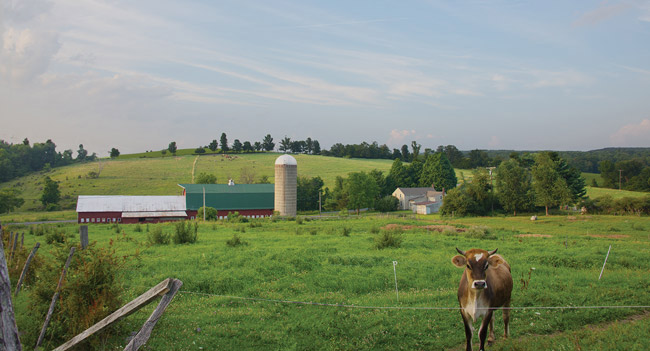 WESTCHESTER AND NASSAU COUNTIES & THE HUDSON VALLEY COUNTRY ROADS, TAKE ME HOME
The gentleman farmer has always had a place in the American landscape, despite the onset of the industrial age and the allure (read: ease) of urban living. But as a gritty go-go culture has worn on city dwellers and suburbanites alike, returning to the farm—albeit with modern machinery in tow—seems like a fine idea. In this all-things-organic age, a crop of new listings is ripe for the picking.

Among the most expensive agri-properties on the market is Linden Farm in Pound Ridge, listed at $22 million. The substantial price tag reflects the cost of land in the area, where acclaimed chef Jean-Georges Vongerichten recently reopened the Inn at Pound Ridge, not far from his weekend home. (Bedford resident Martha Stewart apparently can’t get enough of the chef’s lamb baeckeoffe.) Linden Farm sits on 60 acres near the Cross River Reservoir, the very picture of bucolic horse country. For four-legged residents, the spread offers a stable, paddocks, and a riding ring, with access to an adjacent 4,700-acre preserve and miles of riding trails. Two-legged creature comforts include a pool, green-clay tennis court, and eight bedrooms and bathrooms inside the ivy-covered circa-1929 manor, plus a caretaker’s cottage. Daniel H. Ginnel of Ginnel Real Estate has the listing.

For serious horse-loving buyers, Nassau County’s full-service Old Westbury Equestrian Center, on the market for $12.8 million, could prove to be a fun ride—though at press time it had just gone into contract. Its backstory is the stuff of period dramas: In 1916, Devereux Milburn, a dashing polo-playing blue blood, commissioned architects Peabody, Wilson and Brown to design the main residence, now home to the equestrian center, which lies on 28 acres. The real value lies in the business, land, and facilities, including 45 stalls, an indoor arena, paddocks, and pastures. Lois Kirschenbaum of Daniel Gale Sotheby’s International Realty has the listing.

For a farm of a different flavor, Twin Maple Farm—a dairy operation and artisan creamery in Ghent, in Columbia County—is listed for $875,000 with Mary Mullane of Mary Mullane Real Estate. The certified-organic 56-acre property was the birthplace of the cultish Hudson Red and Hudson Gold cheeses, and while the true beauties here are the Hawthorne Valley Brown Swiss cattle grazing the pastures, the circa-1800s center-hall Colonial farmhouse and the classic red 13,000-square-foot cheese-making barn aren’t too shabby either.

Preaching to the Converted
New York State is studded with factories reincarnated as lofty co-ops, one-room schoolhouses transformed into sweet weekend cottages, and chapels resurrected as unusual private residences. Reuse, it seems, is all the rage.

Consider quaint Kinderhook’s one-time feed store, now on the market for $439,000. With flour grain and feed seed emblazoned on its side, the Victorian-era building’s capacious 3,500 square feet include four bedrooms and three bathrooms, not to mention the property’s separate 1,800-square-foot studio. It’s listed with Peggy Lampman of Peggy Lampman Real Estate.

Halloween is a great time to market homes with storied pasts. Delaware County’s first murder trial was conducted in the circa-1790 Crocker Tavern in Delhi, originally a tollgate. (Since the county had no courthouse at the time, it seems the local bar was the next best alternative.) The interiors of the tavern remain blissfully untouched and await a new trial—by a willing buyer—for $350,000. There’s a stone fireplace big enough to park a small car in, foot-wide floorboards, and antique paneling throughout the 2,600-square-foot home, as well as four bedrooms and one bathroom. It’s listed with Frank Lumia Real Estate.

A pocket-size former schoolhouse in Hopewell Junction, not far from Beacon, has graduated with honors into a renovated single-story home. At just 1,200 square feet, the circa-1873 structure also features a pretty brick hearth, an old-time sign (School District No. 1, Beekman, 1873), and a bedroom and bath. It’s listed with John S. Jakuba of Houlihan Lawrence for the lunch-money price of $219,000. —D. C. 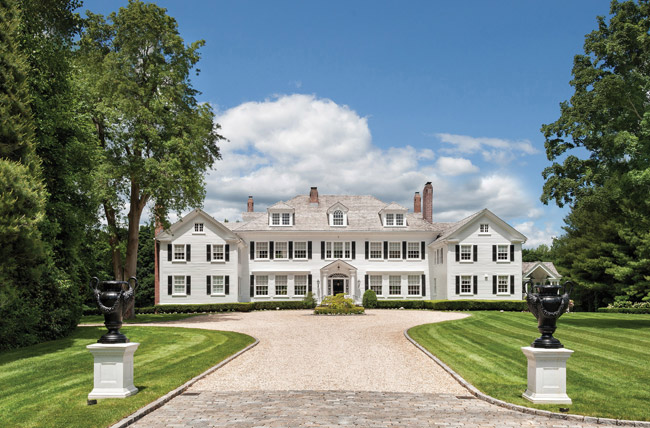 THE PIT AND THE PENDULUM
In the 1986 comedy The Money Pit, Tom Hanks and Shelley Long played a hapless couple who rued the day they fell in love with a crumbling mansion that demolished their bank account. Life would ultimately imitate art at the film’s location, a Gold Coast home in Lattingtown called Northway, once owned by well-known Olympic sailor Eric Ridder. In 2002, the house sold for about $2 million to a couple who would later tell the New York Times, “We didn’t realize how bad it was. We definitely could have done the sequel!” But there is a happy ending to this story: Northway is now an immaculate, stately home, its 14,000 square feet restored, including hand-carved crown moldings, herringbone floors, and gracious staircases. The 5.5-acre grounds also feature a saltwater pool and a pool house with a slate floor, tray ceilings, and a kitchen, bath, and laundry rooms. Shawn Elliott of Shawn Elliott’s Luxury Homes and Estates has the $12.5 million listing.