Get the inside story on East End Real Estate 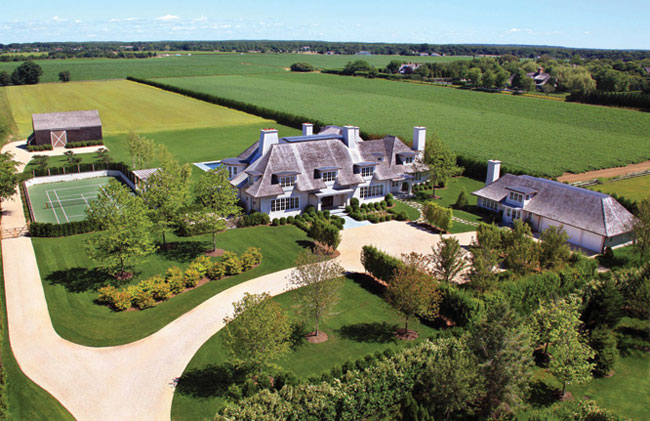 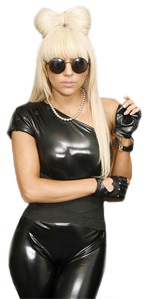 EVEN THE MOST JADED HAMPTONITES have been all a-Twitter over Lady Gaga sightings. The performer is rumored to have checked out a 12,000-square-foot, eight-bedroom, $25.95 million estate in Sagaponack (above). The English-style country house sits on 7.5 acres with a gunite pool, tennis court and lawn as big as a cricket field. There’s a carriage house and a recreation center, the perfect locale for a recording studio or dance facility.

The house was designed by Michael Davis, a Hamptons builder with a record for selling big-ticket spec homes. Prudential Douglas Elliman’s Enzo Morabito, the listing broker, said several A-list celebs have looked at the impressive manse. "Walking into this house is a spiritual experience," says Morabito, a 30-year Hamptons veteran who sold Manhattan real estate developer Stephen Haymes’s Westhampton Beach house for more than $13 million in late July. "You can feel the high level of construction." According to Morabito, the recent flurry of interest in houses like this one on Parsonage Lane means that high-bracket buyers are back, having sat out the market long enough. "Everything worthwhile south of the highway is getting snapped up," he says. "Even good plots of land with teardown houses are seeing fast action." —Jason Sheftell

ROOM AT THE INNS?

Hotel rooms are always hot commodities in the Hamptons, and soon they may be even harder to come by. In Southampton, the Atlantic, the Bentley and the Capri, owned by Hamptons Resorts & Hospitality, seek buyers as the bank sets a late-September date for a foreclosure auction. New York City–based building-sales juggernaut Massey Knakal represents the bank and the owners, and while all three properties can be purchased en masse, Massey Knakal chairman Robert Knakal points out that there is serious interest from potential buyers for each individual property. "We expect very good pricing on each," says Knakal. "The Atlantic is most likely to remain a hotel. The Bentley, with big rooms and areas for large kitchens, is primed to become a condominium conversion." As for the Capri—home to the Pink Elephant, a popular celeb nightspot—Knakal says it’s nicely positioned to become a private membership club with rooms included. "There’s a lot of flexibility with these properties," he says. Located along Route 27, the three make up 43 percent of the total hotel rooms in Southampton. One source close to the deal said the three locations, in their current condition, could net a total of $15 to $20 million. —J.S.

According to Lori Barbaria of Prudential, the rental market was extremely strong this season, with a significant increase in both prices and volume over last year. Debbie Loeffler of Corcoran concurs: "An improved stock market during the first quarter inspired rental commitments earlier in the year—leading some homeowners in prime areas to regret not holding out for higher prices," she says. "And an unusually hot summer in the city motivated renters to scoop up late-summer inventory."

But global warming and a slightly improved economy are hardly the sole causes of a changed rental scene; the world as we know it is shifting. Short-term rentals account for a good chunk of Hamptons real-estate income, according to Brown Harris Stevens broker Wendy Maitland, who rented several homes to house high-profile guests for the recent Chefs and Champagne event honoring Martha Stewart. Jennifer Zabinski of the Wedding Library reports that the rental season has extended deep into fall for Hamptons-based weddings: a six-bedroom home in East Hampton recently went for $50,000 for one weekend in October.

According to the New York Post, "Law & Order: SVU" star Mariska Hargitay recently stepped up from a modest East Hampton cottage on Buell Lane to a pretty little circa-1890 number on Cottage Lane for $7.34 million. On the commercial real-estate front, seasonal "pop-up stores" have become an institution during the past few seasons. "Part of the phenomenon," explains Shaunagh Byrne of Corcoran, "is there’s no reason for a high-end tenant to sign a lease for more than four or five months, given commercial landlords’ willingness to negotiate flexible terms." Asprey, Balenciaga and Thos. Moser are just a few luxury brands that took advantage of a high concentration of seasonal traffic without the responsibilities that come with a long-term lease. And Not a Gallery in Bridgehampton and the Hamburg Kennedy Gallery in Southampton established seasonal "salons" catering to the somewhat finicky and unpredictable local art market.

Technology, too, has been a game-changer. Instead of working at home, folks work from the sand. This summer Reid Price of Brown Harris Stevens gave beachside presentations on his iPad, showing his Manhattan listings to interested sun-seekers. And traditional bricks-and-mortar businesses are going the clicks-and-mortar route. "I want to spend summers with my children and participate in their daily lives," says art dealer Jason Rosenfeld, who has two young children and rents in Sag Harbor. "I find myself doing more business in the Hamptons with clients who have also migrated east than I would if I spent the summer tethered to my gallery in the city." —Bryan Graybill

ANOTHER LOT AT CHRISTIE’S

Bridgehampton resident Christie Brinkley is one brainy beauty, with three gorgeous Hamptons homes in her portfolio. She recently listed one of them, a North Haven waterfront property just a short distance from Sag Harbor, for $15.75 million. The simple Palladian-style home, built in 1843, is magnificent, with four columns framing the entry, a long rocky drive and 327 feet of beachfront. Brinkley bought the house for $7.15 million in 2004. Jay Flagg of Prudential Douglas Elliman (516-768-0349) has the listing. —J.S.

Ah, celebrities—they always expect the imperial touch, even in the Hamptons, where star treatment is already de rigueur for the rich, rude and entitled. But when it comes to searching for real estate, they’re like babes in the woods.

Celebrities are wealthy, of course, with megawatt incomes courtesy of the entertainment industry. But they’re not super-super rich, like the Wall Street kingpins and hedge-fund honchos who stroll our hallowed shores. A couple of hundred million in the bank? A pittance compared to the portfolios of our local billionaires. And that couple of hundred million is always susceptible to the familiar money-draining pitfalls of Hollywood: drugs, drink, divorce and sudden loss of popularity among a fickle public.

Privacy is the overriding factor in a celebrity’s search for a chunk of the Hamptons. But finding privacy on the East End is like trying to go to the movies in East Hampton undetected. Gates and alarm systems are an absolute must, and waterfront spreads a no-no—it’s virtually impossible to secure an entire property when one end of it is easily reached from the water. Perhaps this is why so many celebrities shop, but rarely sign on the dotted line, leaving brokers scratching their heads as a cavalcade of Escalades roars down the streets, their occupants never to be heard from again. —Scoop Drummond

The Corcoran Group’s mid-year market report, released July 15, compares this year’s combined first- and second-quarter sales figures with those of 2009. It shows sales volume on the South Fork is up 134 percent, from $639.64 million to $1.5 billion, and the number of residential units sold up 113 percent.

While the average luxury home price in the South Fork (defined as the top 10 percent for a given period) is down 5 percent, from $6.8 million to $6.42 million, the total number of luxury residential units sold increased by 114 percent. Perhaps the 10 percent increase in overall sales resulted from discounts in the region’s luxury market. —Aime Dunstan

Whale-size properties are being offered up on the East End like Fudgsicles from an ice-cream truck. Consider these recent listings:

On 11.5 acres in Bridgehampton, Sandcastle is a 31,000-square-foot, tri-level super-mansion listed with Christopher Burnside of Brown Harris Stevens for $49.5 million (631-537-4320). Touted by Farrell Building Co. as "the ultimate summer rental," it includes a double living room with dual fireplaces, a formal dining room with fireplace, Bordeaux walnut floors with radiant heat and a 10-seat theater with interactive seats. Upstairs, a 2,000-square-foot master suite is joined by eight ensuite bedrooms, a sitting room, wet bar and private two-bedroom apartment. A children’s entertainment center and air lounge with virtual golf, skateboard halfpipe and rock-climbing wall, media room with five plasma TVs, squash and racquetball court, two-lane bowling alley, full bar, disco and a spa facility including a Jacuzzi, steam bath, sauna and massage area round out the lower level. Techno geeks will go nuts for the Crestron Electronics full-house automation system and hydraulic lift in the lower-level garage.

At 55 acres, Tyndal Point (above) is the largest private property in North Haven Village. Listed in 2007 at $80 million, it has been reduced to $44.99 million. Perched on the tip of a peninsula with sweeping views and 3,000 feet of pristine waterfront, the property has preliminary approval for a subdivision with six lots to be sold in three 17- to 20-acre pairs, allowing for both a waterfront residence and a guest house; final approval is likely by the end of this year. The northernmost pair is equipped with a deep-water dock for large boats, as well as another dock next to the Shelter Island South Ferry landing. The southernmost pair is approved for a new dock to be built in front of an existing glass house. Both the southern and middle lots have access to a dredged lagoon with additional dockage and safe harbor during storms.

On 18 acres with ocean views and frontage on Wainscott Pond, the Topping family farm has been in its namesake East End family for generations. With three homes on four parcels, the compound includes multiple barns and room for just about anything money can buy—if you happen to have a cool $72 million. Rumor has it Madonna looked into the spread, which includes a stable and riding rings, but took a pass. Dana Trotter of Sotheby’s International Realty has the listing; 631-537-6000. —A.D.

This article appears in the October 2010 issue of HC&G (Hamptons Cottages & Gardens).

USC Puts President's Estate on the Market for $24.5M

Used as the president's home since 1979, this monumental listing is no Trojan horse.