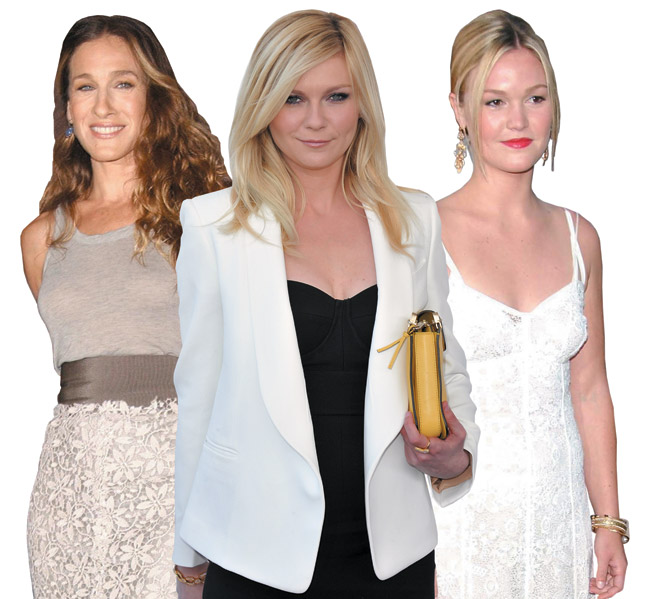 Stars: They’re just like us, right? (Oops, wrong magazine.) Unlike mere mortals, bold-faced names can really bolster their bank accounts simply by unloading a premier property. Julia Stiles recently did so, pocketing $2.7 million for her three-bedroom duplex with two wood-burning fireplaces at 310 East 15th Street (she purchased it a decade ago for $1.995 million). In SoHo, Jonah Hill’s full-floor Howard Street loft was recently listed for $12,000 a month; it boasts 13-foot ceilings and a fireplace, but no doorman expecting a holiday tip. A few blocks away, Kirsten Dunst’s Canal Street penthouse has just been snapped up by a new tenant. The $12,500-a-month two-bedroom was delivered furnished or partially furnished (let’s hope the actress’s funky aesthetic matches the renter’s), and famous neighbors include actor Casey Affleck and singer Michael Stipe, though the latter reportedly just sold his pad in an off-market transaction.

Stars: We just can’t keep up! In Brooklyn, Michelle Williams has listed her 22-foot-wide townhouse at 126 Hoyt Street for $7.5 million (significantly more than the $3.6 million she and her late partner, Heath Ledger, paid for it in 2005). Located in trendy Boerum Hill, it has six bedrooms, a wine cellar, and a garden with a waterfall and an ivy-covered trellis. In Greenwich Village, Sarah Jessica Parker and Matthew Broderick are hoping a sequel will garner better reviews, listing their East 10th Street townhouse for the second time in the past three years. Purchased in 2011 for just under $19 million, the 25-foot-wide residence was renovated by SJP-MB, although they never moved in, choosing to stay put in their Charles Street townhouse instead. After taking it off the market two years ago, the couple has recently placed the property with Million Dollar Listing New York star Fredrik Eklund, who has lowered the price tag from the old ask of $25 million to $22 million. Let’s see if it will sell quicker than a pair of Manolos at a sample sale. —Rebecca Morse 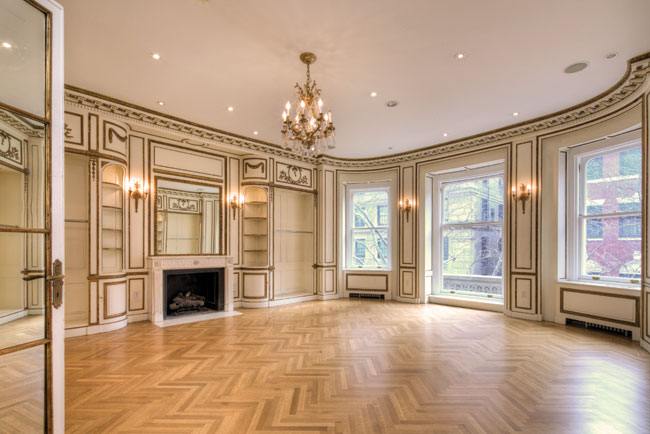 NEW YORK CITY
Home Is Where the Hearth Is
Shopping, crowds, slushy streets: There comes a point when the holiday madness can make even the biggest extrovert want to head home and curl up by the fire. No fireplace? Consider these recent listings, and make your holiday wishes come true.
Many a chestnut has surely been roasted in the gorgeous hearth at 57 East 64th Street, a late–French Gothic mansion that can be yours for just $44 million. The seven-floor residence dates from 1905, when Charles Pierrepont Henry Gilbert built it for American socialite Arlene Tew (at 14,000 square feet, it can even accommodate your office holiday party). House-hunters might want to hang their stockings on the contemporary marble mantel at 95 Charles Street, a 6,500-square-foot, four-bedroom quadruplex with a private garden that’s listed for $19.25 million. And on Remsen Street in Brooklyn Heights, a $3.95 million, three-bedroom apartment in a 26-foot-wide Flemish Bond brick brownstone (it recently won an award from the Brooklyn Heights Association for its new stoop) comes with a mahogany-mantel fireplace, the perfect backdrop for swags, garlands, and mistletoe. —R. M.

WESTCHESTER AND NASSAU COUNTIES & THE HUDSON VALLEY
Homes for the Holidays
Got a few impossible-to-please people to shop for this season? A friend who has everything? A spouse not likely to be impressed with standard-issue gear and gadgets? Why not go big for the holidays and give the gift of real estate? Your loved one can wake up and smell the coffee at a four-acre Mamaroneck property that Chock Full o’ Nuts founder William Black presented to his third wife, Page Morton Black, upon their marriage. (She was the company’s jingle singer, as was wife number two, but that’s another story.) While some of its interior spaces are indeed a little nuts—the Mrs. was fond of fuchsia, and there’s a room dedicated to her poodles—just about anyone would thrill to be presented with its waterfront pool, cabana, and terrace with views of Long Island Sound. Even better, the sale of the late Mrs. Black’s home will benefit the Parkinson’s Disease Foundation, a gift that will keep on giving. Lou Lou Pollak of Houlihan Lawrence has the $7.999 million listing.

For water babies, a backyard pool will do nicely. But why not do laps year-round? The most sybaritic indoor pool currently on the market, part of a $10.5 million Rye estate, is built into a glass-walled loggia, replete with an adjoining spa and steam room, chandeliers, and doors that open onto a terrace. The swanky 8,280-square-foot pad also comes with a billiards room, a gym, a wine cellar, and—why not?—an outdoor pool. Joan O’Meara and Candace Steiner, both of Houlihan Lawrence, share the listing.

Glamping—that’s camping without the hardship—is all the rage these days. For the outdoors enthusiast who would rather not rough it, take your cue from Camp Uncas in the Adirondacks, built by designer and developer William West Durant in 1890. Situated on remote Raquette Lake (also the name of the nearest town), the camp later belonged to J. P. Morgan and is now listed for $3.25 million with Robert Burke of Ginnel Realty. The estate includes a 4,000-square-foot main lodge and several surrounding cottages, all for sale completely furnished (think lots of taxidermy, Lincoln Log–like beds, vintage monogrammed silverware, and Adirondack chairs, naturally).

For those who are obsessed with celebrity homes, consider the Bedford property owned by Michael Douglas and Catherine Zeta-Jones, on the market for $8.1 million with Sally Siano of Siano & Company. The circa-1930s Colonial was completely renovated by the on-again, off-again couple, who spent years transforming the 6,600-square-foot interiors into a Hollywood-worthy haven. It hardly compares, though, to director Ron Howard’s former residence in nearby Armonk, which set a Westchester record when it sold in an all-cash deal this summer for $27.5 million. Happy days, indeed.

A newly built estate in Sands Point, in Nassau County’s Gold Coast, is ideal for Gatsby-esque dreamers. Its ballroom features 30-foot-high ceilings, a marble fireplace, and intricate basketweave moldings, and the expansive, marble-floored dining hall is made for entertaining. There’s two of everything in the ample kitchen: two refrigerators, two dishwashers, and two ten-foot-long, granite-topped islands. And the lower level has no shortage of amenities, including a theater, bar, sauna, massage room, wine cellar, and yet another full kitchen. The property is listed for $10.588 million with Andrea Jablow of Shawn Elliott Luxury Homes & Estates.

Finally, for the green thumb on your list, check out the 1916 spread designed by society architects Delano & Aldrich for Bertram Work, the president of B. F. Goodrich Company. The rubber baron lavished a lot of dough on the estate he called Oak Knoll, sited high on a hill in Mill Neck with views of Oyster Bay. Its 18 acres include a greenhouse, formal Delano-designed gardens, a landscaped courtyard, reflecting pool, and allées of specimen trees. (Fear not: A gardener’s cottage also sits on the property, if all this sounds like too much for one pair of green thumbs to tend.) It’s listed for $12.8 million with Linda Faraldo of Daniel Gale Sotheby’s International Realty. —Diane di Costanzo 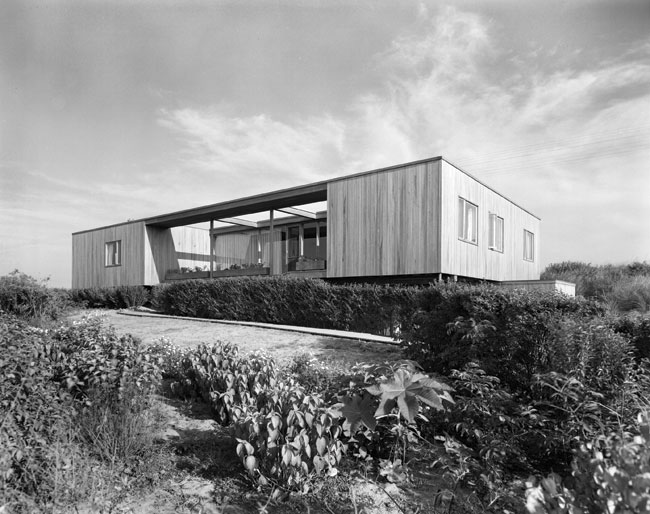 THE HAMPTONS
Farewell, Farney House
Summer might be a sweet memory, but the world of real estate keeps on spinning, especially in America’s second most expensive ZIP code. The new owners of a 1946 Philip Johnson beach house in Sagaponack recently razed it in order to build a 10,000-square-foot shingle-style manse, designed by architect Roger Seifter of Robert A.M. Stern Architects. Originally commissioned by the Farney family, the Johnson house was a precursor to the architect’s famous Glass House, his masterpiece in New Canaan, Connecticut. While two unknown parties expressed interest in buying the structure and moving it elsewhere, its age—and the additions made to it in the 1980s—ultimately made the plan untenable. Now Johnson’s early modern abode is just another piece of Hamptons history.

Going for Bespoke
While brokers defect from agency to agency with the speed of serial house-flippers, Cody and Zach Vichinsky simply decided to go out on their own. The broker brothers recently left Corcoran to form a new high-end boutique agency: Bespoke Real Estate, launched in August with $350 million in exclusive listings. Touting luxury service for properties with asks of $10 million and above, Bespoke offers private membership with a password-protected web portal for perusing its site. “The Hamptons has seen record-breaking sales,” says Cody Vichinsky. “We wanted to focus on quality, not quantity, and invest more in the experience.” The company recently listed a $59.9 million, 16-acre compound on Parsonage Lane in Sagaponack, consisting of three building lots and an adjacent ten-and-a-half-acre reserve. Its new 10,000-square-foot modern house will be designed and built by Jay Bialsky, with 12 bedrooms, a pool, and a tennis court.

PALM BEACH
Sunny skies continue to shine on Palm Beach real estate. “The market has improved tremendously from even three years ago,” reports Senada Adzem of Douglas Elliman, noting both Florida’s lack of a state income tax and a stronger dollar as it relates to purchasing power. “Prices are up, and there’s a shortage of inventory. The draw is the value and the lifestyle.” The numbers seem to bear it out: Douglas Elliman’s recent “Market Report for Palm Beach,” prepared by Miller Samuel, Inc., Real Estate Appraisers & Consultants, showed a 31 percent median price increase in second-quarter sales, from $2.5 million in 2013 to $3.275 million in 2014. Second-quarter inventory fell 7.4 percent, from 108 properties to 100, while the number of days a house spent on the market averaged 137, falling 50.7 percent from last year’s high of 278. Jumping into the frenzy, Ivana Trump sold her Concha Marina estate in July for $16.6 million to fashion designer Tomas Maier. Trump originally bought the home for $4.4 million in 1994 after her divorce from the Donald (whose Mar-A-Lago lies just down the road). The Spanish Mediterranean–style house, built by architect Addison Mizner in 1921, spans nearly 15,000 square feet and features nine bedrooms and bathrooms, a lotus-shaped pool, and an underground tunnel that links it to the beach, though at this point in her life, Trump likely takes a car and driver instead.

A version of this article appeared in the Holiday 2014 issue of New York Cottages & Gardens with the headline: Deeds & Dont's.