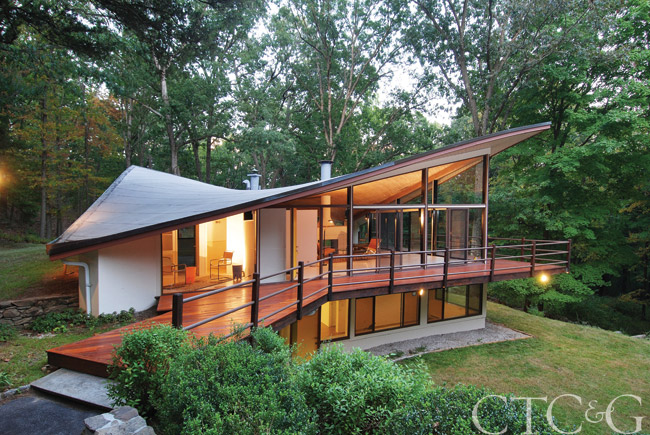 It’s not hard to find an impressive big house or a small house with more modest charms. What’s difficult is locating a gem of a home that’s been lavished with fine finishes and awesome amenities but that also clocks in at 3,000 square feet or fewer—or so they say. In actual fact, even in a state known for its grand estates, Connecticut offers a wealth of small wonders, including antique farmhouses, brand-new townhomes and everything in between.

MODERN LOVES
Starting in the middle is our area’s most famous—and, arguably, fabulous—small-scale sort of home: the mid-century modern. One important mid-century listing was designed in 1960 by James Evans, a student of the architect Louis Kahn. Located on nearly five acres in that hotbed of Modernism, New Canaan, the home’s most iconic feature is its curved and swooping hyperbolic roof, which makes for a dramatic living space inside, anchored by a double-sided fireplace. The exterior walls appear to be made almost entirely of glass—expansive windows as well as sliding doors that step out onto a wraparound balcony. The largest of our small houses, at 3,200 feet, it has also undergone a thoughtful renovation, now offering an updated kitchen with Asko and Sub-Zero appliances, four bedrooms and three bathrooms (plus one half-bathroom). It’s listed for $2 million with John Engel of Barbara Cleary’s Realty Guild. 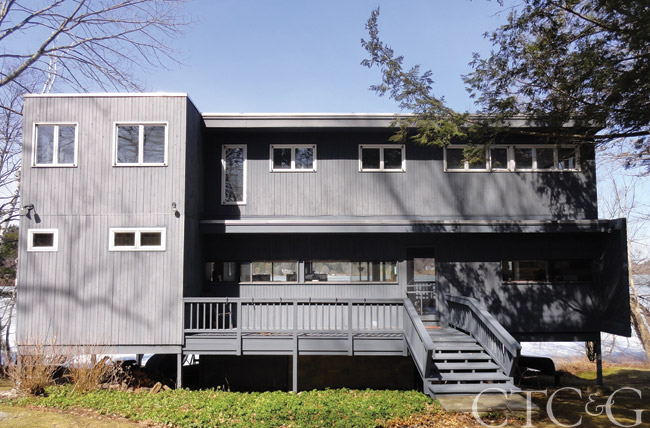 Another architecturally significant listing was designed by Marcel Breuer, who’s probably best known for his tubular steel Wassily chair. Equally sleek is the dwelling he called Caesar Cottage, built for the Caesar family in 1952 directly on Lake Wononscopomuc, better known as the Lakeville Lake. As conceived by Breuer, the tiny, open-plan home was centered on a sculptural fireplace constructed of hammered concrete, offering just a kitchen, dining area and a large living/sleeping room. Over the years, a second floor was added and the home now comes complete with three bedrooms and a study. Some of the dwelling’s original features have also been restored, including the walnut flooring, wood-paneled ceilings, wall of windows, porch and, best of all, that fireplace. On a one-acre lot with 108 feet of private waterfront, the property lists for $1,295,000 with Mimi Harson of William Pitt Sotheby’s International Realty. 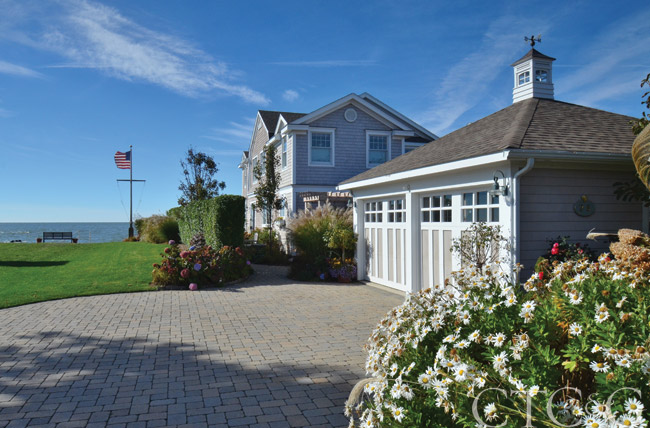 ON THE WATERFRONT,
More often than not, waterfront homes are supersized, simply because the
land underneath is so valuable that builders look to max out on their square footage, so as to sell them for the highest price possible. The challenge: Those big houses are sometimes set cheek-by-jowl with little buffer—and no privacy—between them. But along the Old Saybrook coastline stands a circa-1924 Colonial with 2,400-square-foot interiors and landscaped lawns that roll toward the sea wall and 180-degree views of Long Island Sound from every vantage point. The entire home was renovated in 2012 to create an easy, open plan downstairs with access to the expansive stone terrace with views onto the beach and a private terrace along one side. In all, the $1,925,000 listing offers four bedrooms and three bathrooms (plus one half bathroom). Colette Harron of William Pitt Sotheby’s International Realty has the listing. 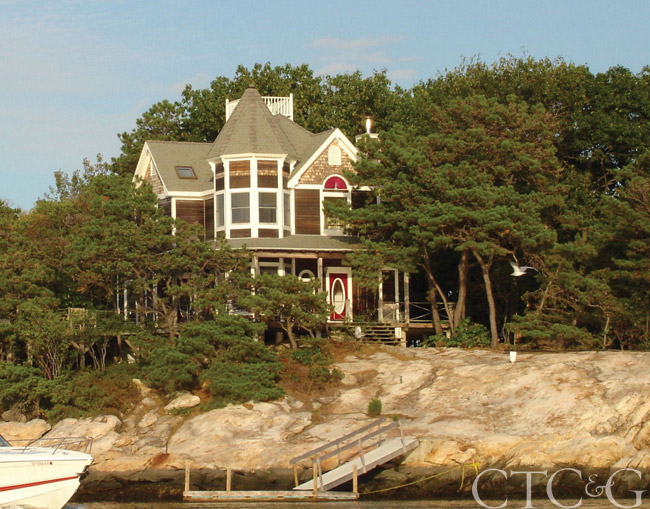 Of course, for ultimate waterfront privacy, an island’s required—and tiny Pot Island off the coast of Branford is now available. Measuring just an acre in total, Pot’s sole dwelling is a circa-1989 Victorian, offering a fanciful turret, loads of porches and 1,738-square-foot interiors, with three bedrooms and two full bathrooms. Designed for off-the-grid living, the home is solar powered; it also comes with a dock, deep-water mooring and sandy beach. It’s listed with Lori Vogel of William Raveis. 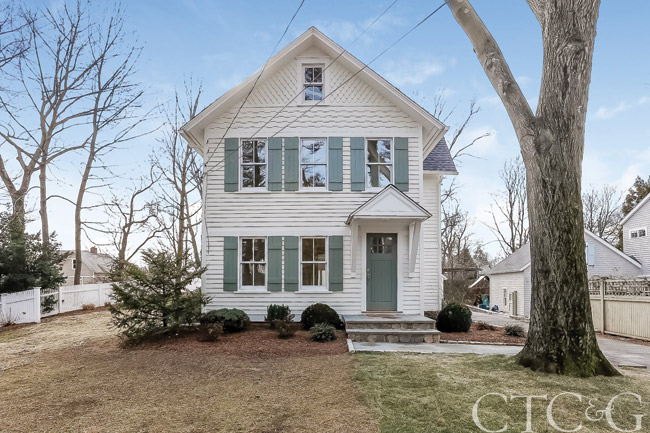 FARMHOUSE & COTTAGE living
Our state’s original farmhouses tended to be tiny for reasons that were more practical than aesthetic. Then, as now, smaller dwellings were cheaper to build, heat and maintain. Sadly, the typical still-small antique farmhouse has gone the way of the working farm itself, having been renovated—and expanded—over the years. An exception: a 2,100-square-foot gem in the heart of Rowayton listed for $1,325,000. From the outside, this immaculate home still looks like a circa-1900 antique: Clad in white clapboard, it has old-fashioned shutters painted a tasteful sage green and a sweet front stoop. But the interiors have been entirely re-imagined, now designed along an open plan with a combined space that accommodates the new kitchen and family room and features a fireplace and sliding doors onto a back terrace. Upstairs, find a true master suite with marbled bathroom, along with two additional bedrooms. It’s listed with Liz Beinfield of Houlihan Lawrence.

Finally, the smallest of our small houses exemplifies the cute country cottage­—a two-bedroom, two-bathroom cape measuring just 1,066 square feet. Located along the Mallory Brook in Washington, the interiors of this circa-1961 home were renovated by one of the buyers of the J. Seitz boutique, Amanda Seitz, in nearby New Preston. Every square inch is thoughtfully and stylishly optimized, from the compact kitchen to the chic master bedroom. Outside, there’s a 400-square-foot deck overlooking the brook. Judy Auchincloss of Klemm Real Estate in Washington lists the property for $335,000.

A version of this article appeared in the March 2015 issue of Connecticut Cottages & Gardens with the headline: Deeds & Dont's.