The Inside Scoop on New York Real Estate 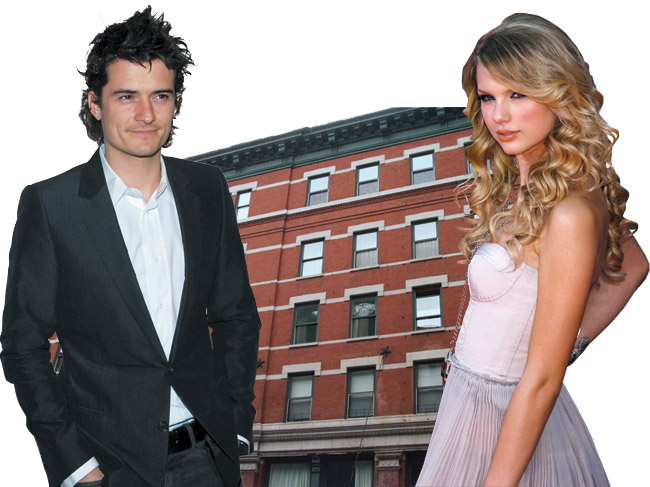 What’s jammed with celebrities and on the rise? The elevator at 155 Franklin Street in Tribeca, otherwise known as the Sugar Loaf Building. Dating from 1882 and located on a cobblestone block between Hudson and Varick streets, the condo is luring headliners left and right. Soon after Taylor Swift took up residence in the 8,300-square-foot penthouse (which she bought from Lord of the Rings director Peter Jackson for $19.95 million in March), Orlando Bloom reportedly scooped up a $4.875 million, 2,400-square-foot, three-bedroom loft with wood-beamed ceilings on the fourth floor. Meanwhile, director Steven Soderbergh is hopping off for good, recently selling his 3,500-square-foot, third-floor apartment for $6 million.

Uptown, Bob Gaudio (of Frankie Valli and the Four Seasons fame) has listed his 15th-floor two-bedroom at the Emery Roth–designed San Remo for $5.95 million. For those who love the San Remo but require more space, Demi Moore is reportedly shopping her triplex upstairs for $75 million. Hopefully, these will sell quicker than actress Helen Hunt’s three-bedroom, three-bath co-op at 320 West 86th Street, only a mile away: After eight months on the market, $2.58 million was as good as she could get. Deepak Chopra has finally sold his 69th-floor apartment at the Park Imperial on West 56th Street and is headed downtown to the Delos Building on East 11th Street, where Leonardo DiCaprio also owns a pad. Insider deals afoot? The two sit on the board of Delos Living, the wellness organization behind the building. Something’s definitely in the air at the Park Imperial: Sean Combs and Christopher Meloni have been trying to unload their condos for years. Meloni even offered a fully souped-up Porsche as a bonus to the buyer of his 3,000-square-foot three-bedroom before renting it for $55,000 a month to a Saudi prince last year. 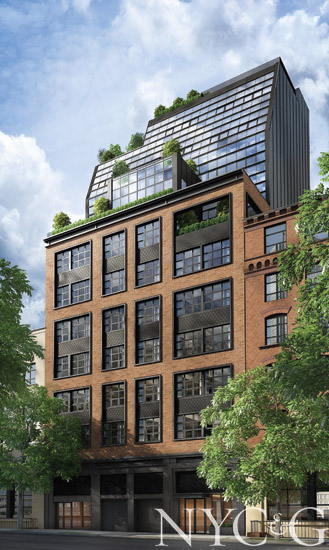 NEW YORK CITY | PARK YOURSELF HERE
There are kids’ rooms, media rooms, and maids’ rooms, so why not a room for your car? This fall’s must-have real-estate perk: private (and often automated) parking that’s out of reach from prying paparazzi’s eyes. With celebrities like Kim Kardashian and Kanye West scouring the city for homes with parking spaces that can be entered and exited without public scrutiny (um, really?), developers have taken note. Gone are the days when the only game in town was the Annabelle Selldorf–designed Sky Garages at 200 11th Avenue, where a car elevator lifts the pricey wheels of residents (such as actress Nicole Kidman and fashion designers Domenico Dolce and Stefano Gabbana) directly to garages attached to their apartments.

The conversion of the Greenwich Village digs of the Children’s Aid Society brought to market 25 condominiums with interior details by designer Eric Cohler and landscape design by Edmund Hollander. Among them: four townhouses ranging from 3,400 to 7,500 square feet, asking $10 million to $17.25 million, each with a private underground garage. Sound like your sweet spot? Too late: The townhouses went into contract faster than a Bugatti Veyron at top speed. Meanwhile, CetraRuddy, the hotter-than-hot architects behind One Madison and Walker Tower, are transforming a former garage at 12 East 13th Street into eight exclusive condos, a conversion that’s the first in the city to use the Park Plus robotic parking system. Residents’ cars will be parked on the second floor by a robot (possibly obviating the need to tip a parking attendant) and can then be retrieved—in less than a minute—via iPhone. No need to mutter “Dude, where’s my car?” ever again.

WESTCHESTER COUNTY & THE HUDSON VALLEY | CHEEVER COUNTRY
Written 50 years ago, John Cheever’s “The Swimmer” is one of his darker suburban tales—the story of a man who decides to hop from one backyard pool to the next in a quixotic attempt to swim home, despite the many stiff drinks he has imbibed along the way. The author suggests that time is passing, autumn is coming, and the fellow has no home to swim to after all. Cheever wrote the story while living in the circa-1795 Ossining home he bought in 1961, in which his widow passed away last spring. The romance of owning the longtime abode of the bard of American domestic life might be more appealing than the property itself, if its broker’s assessment is any gauge. “I try to forewarn people,” says Realtor Bitsy Maraynes of Houlihan Lawrence in Chappaqua. “It needs a lot of work. A lot.” According to Cheever’s daughter, writer Susan Cheever, “The electricity is in working order, the roof is okay, the chimneys are clean, and the oil burners are fine.” A prosaic assessment indeed.

If an “okay” roof isn’t enough of a draw, consider the Post-It notes that festoon the furnishings, identifying which items are bequeathed to Cheever’s various heirs, such as a vintage typewriter and oil paintings of the author. Chief among the $525,000 home’s charms are its covered balcony running the width of the second story, a brass plaque next to the front door that’s inscribed Cheever, and a stone column writ with the property’s name, Afterwhiles. 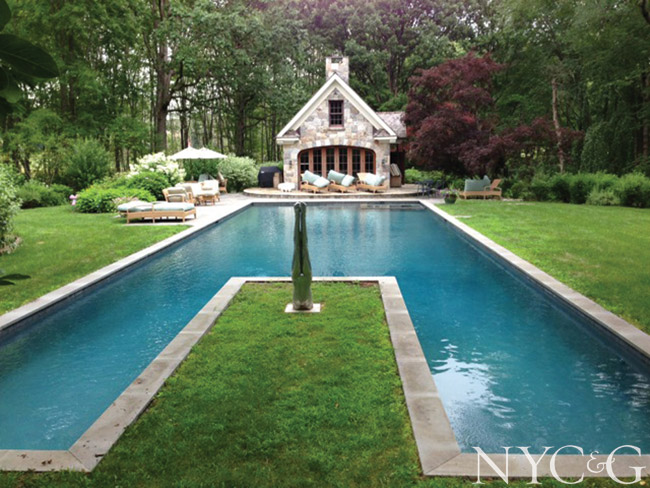 THE WAY THEY WERE
Down the road in Bedford is the house owned by the late Grammy-, Oscar-, and Tony-winning composer Marvin Hamlisch, whose tunes (“The Way We Were,” “What I Did for Love”) tended toward the sentimental, perhaps even overwrought. The interiors of Hamlisch’s nearly 4,700-square-foot home are anything but, with modern furnishings and a neutral sensibility. The showiest bit: extraordinary vistas over the 4.6-acre hilltop grounds, with the Hudson River to the west and Connecticut to the east. Hamlisch and the Mrs. purchased the property in 2011 as their dream retirement home, setting up his grand piano to take in the 30-mile views (sadly, Hamlisch passed away a year later). David Turner of Houlihan Lawrence has the $7.95 million listing.

Across the river, in Nyack, Rosie O’Donnell has listed a whole street’s worth of residences with David Sanders of Sanders Properties. The former magazine editor and talk-show host made news last October when she purchased a $5 million plantation-style manse in Sarasota, Florida, a stone’s throw from author Stephen King’s castle. Now she’s looking to unload four homes along picturesque Washington Avenue for a whopping $6.15 million. The jewel in the comedian’s crown is the circa-1900 brick-faced manor where she has lived for 20 years, currently listed for $2.5 million. Next door is a newly renovated blue-clapboard home with a dock on the Hudson River, listed for $2.2 million. And at $850,000 and $600,000, a couple of modest contemporaries lie on two adjacent lots, both rocking a ’70s vibe. —D. C. 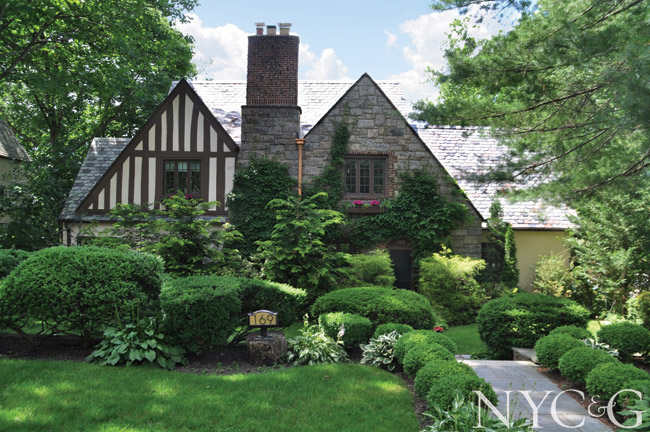 WHAT $1 MILLION | WILL GET YOU
The oft-used phrase “Location, location, location” is a relative one, since some people will plunk down $1 million for a dated home in an unremarkable suburb, whereas others would prefer to snap up a remote, sprawling farm upstate for the same amount. But for the shrewdest of shoppers, sometimes a great location and a great price come together.
Baffling to the uninitiated, “Bronxville P.O.” is the designation for homes that lie across the line dividing super-tony Bronxville Village from less desirable Yonkers. To be clear, the privileges gained from buying into “the P.O.” include the opportunity to mail your Christmas cards in town—return address Bronxville—but do not include access to the village’s excellent schools and services. That aside, the Lawrence Park West neighborhood, located within the P.O., is downright gorgeous, brought to you by the family who founded nearby Sarah Lawrence College. A four-bedroom 1920s Tudor with formal gardens, Jacuzzi, and wine cellar is quintessential Bronxville, listed for just $1.075 million with Patricia Breen of Houlihan Lawrence.

In Millerton, an 1,800-square-foot modern built by New York architects Grzywinski + Pons in 2012 has just hit the market for an even $1 million. On a private seven acres, it offers easy access to Millerton’s bustling Main Street. “Millerton’s the cultural and commercial heart of the area,” says the listing’s broker, Houlihan Lawrence’s Andrew Gates, who characterizes the town as hipper than horsey Millbrook. Embracing its surroundings, the contemporary Danish farmhouse, clad in matte aluminum, reflects the colors of the trees around it.

In Catskill, New York—across the river from smoking-hot Hudson—it’s virtually impossible to spend a million on a house. Currently topping the market at $699,900, Cauterskill Creek Farm is a 144-acre spread with an 1840 Greek Revival farmhouse, a passel of classic red barns, a grape arbor, a cave carved into a massive stone outcropping, and a creek that wends its way through the property. Completing the picture is the home’s 45-foot-long “rocking-chair porch,” on which a buyer can contemplate what to do with the remaining $300,100. Mark Twentyman of Sotheby’s International Realty has the listing.

This article appears in the September 2014 issue of NYC&G (New York Cottages & Gardens).