Deeds & Don'ts: The Best Listings, Both Big and Small, In the State of Connecticut 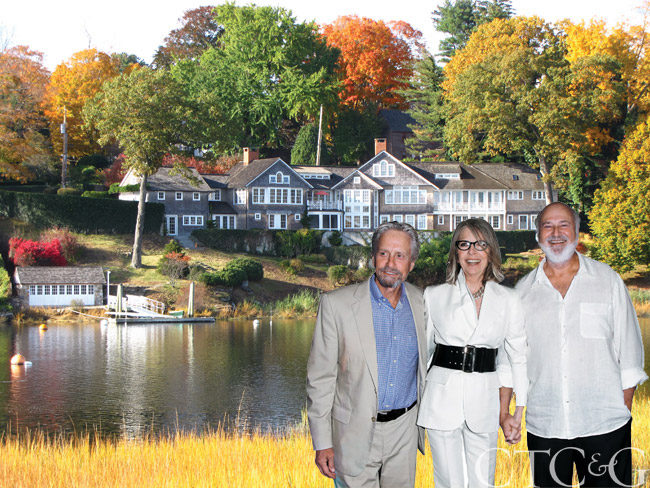 In keeping with the theme of the issue, we bring you the best listings across the state and in several categories, from the best small house (at $479,000) to the best big house (at $65 million) and everything in between. Truth is—and maybe we’re biased—but Connecticut’s residential real estate market has the richest variety in the country from Colonial-era farmhouses to mid-century moderns. Here, eight listings that offer the best of the best.

Best Coastal Cottage
Here’s a home with a Hollywood connection: a grand Southport estate that steals the opening scenes of the movie And So It Goes, starring Michael Douglas, who plays an obnoxious Realtor by the way, and Diane Keaton. While the film was a bit of a flop (“wrinkle porn,” wrote one reviewer), one of its locations, now listed for $7,250,000, is a hit. The home sits on an elevated acre in historic Southport Village with views over the harbor, the golf course and Long Island Sound. Lawns slope down to the water’s edge and a private deep-water dock and boathouse. Inside, the 4,413-square-foot interiors are modern, offering an open floor plan, four bedrooms and six bathrooms, including a master suite with a balcony and his and her (or his/his or her/her) spa baths. Matthew Lahey of William Raveis Exceptional Properties has the listing. 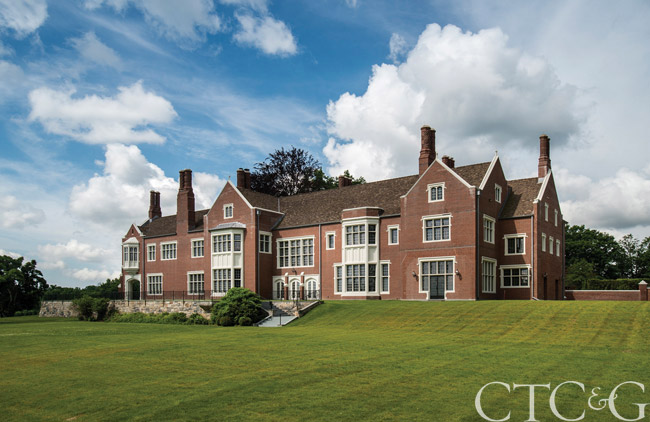 Best Big House
At 17,500 square feet, this Greenwich home has actually shrunk since it last sold in 2010 for $35 million. Dunnellen Hall had belonged to the estate of Leona Helmsley, once called the “Queen of Mean,” who made headlines after her death for bequeathing $12 million to her Maltese, while disinheriting some of her grandkids. In 1988, the home was named in a tax evasion suit that claimed the Helmsleys illegally billed their real estate company for its renovations for which Mrs. Helmsley spent nearly two years in prison. If Helmsley’s reputation is a bit tarnished, her former home is anything but. The circa-1916 Tudor has been thoroughly renovated taking it from “looking like a museum to becoming a home,” listing broker Jane Howard Basham of David Ogilvy & Associates told the press. The current owners removed a couple of wings while installing a new kitchen with a La Cornue stove and generally polishing up the grand rooms, including the 45-foot living room with teak floors and a limestone fireplace, nine bedrooms and 12 bathrooms. On 40 hilltop acres with views over Long Island Sound, the estate lists for $65 million. 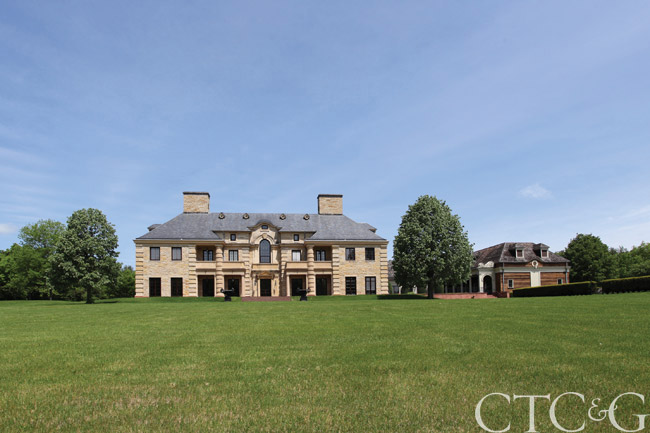 Best Family Compound
History is repeating itself in Litchfield County, too. Tennis great Ivan Lendl’s 450-acre Goshen estate is for sale again: It was listed for $25 million in 2005, pulled from the market, and is now relisted for $19,750,000 with Kathryn Clair and Pat Lahoud of William Pitt Sotheby’s International Realty. Lendl built the Georgian manse in 1992, kitting it out with two swimming pools (indoors and out), an 1,800-square-foot gym, an exercise room with a steam room, a horse barn and paddock, and, to no one’s surprise, a tennis court. The 25,000-square-foot home offers 10 bedrooms, 15 bathrooms and a wood-paneled
trophy room. 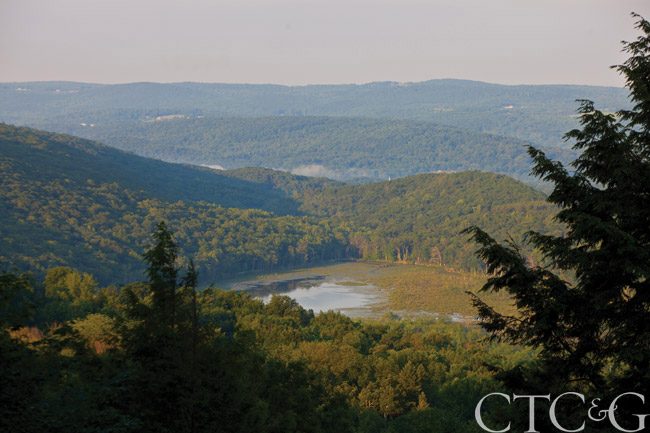 Best Views
This hilltop Kent home offers distant vistas over to New York State and the Litchfield Hills. And it was the views that informed the siting of the home when it was built in 1999 with gorgeous landscapes framed by every oversized window. The owners also used the land itself for materials, salvaging stones that they had quarried on site and using felled trees for the handsome exposed beams and wide floorboards. Today, the 50-acre property offers a freeform, infinity-edge pool, a three-bedroom guesthouse, two art studios barns and extensive gardens. Inside the 14,000-square-foot main house find a two-story atrium, six bedrooms and nine bathrooms. Judy Perkins of William Pitt Sotheby’s International Realty lists the property for $7,785,000. 860-248-0722. 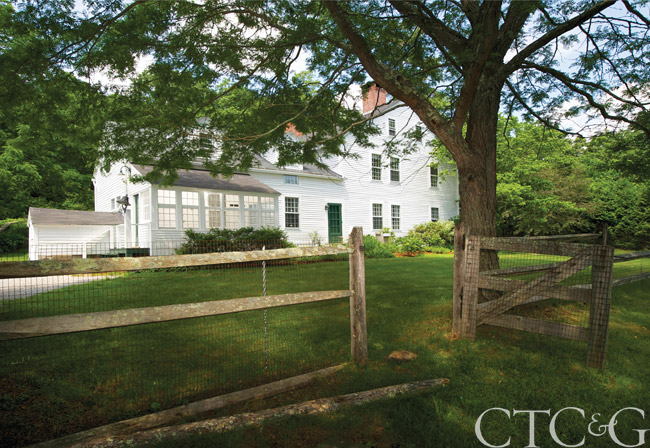 Best Farmhouse
Our third re-listed property belongs to actress Renee Zellweger who purchased Cotton Tavern, a circa-1770 farmhouse, in 2004. It’s on 38-acres in Pomfret, east of Hartford, a surprising location for an Academy-Award-winning actress (Cold Mountain). Or maybe not so surprising given the town’s charms, per the actress: “The seasons and landscape are breathtaking, the quality of life and festive holiday celebrations are of bygone days, and you’ll make more true friends in Pomfret within weeks than you would during a lifetime in most other places.” When not out making friends, Zellweger thoroughly renovated the home’s 3,463-square-foot interiors with tasteful, feminine touches: crystal chandeliers against rustic exposed beams; a claw foot tub in the master bathroom; and antique woodwork and fixtures throughout. Outside, there’s a glamorous freeform swimming pool, a loft-like guesthouse and a 2,000-square-foot party barn. Would-be buyers who own a helicopter are in luck: There’s also an approved permit for a landing pad on the property. Joanna Dresser of LandVest Luxury Real Estate has the $1.6 million listing. 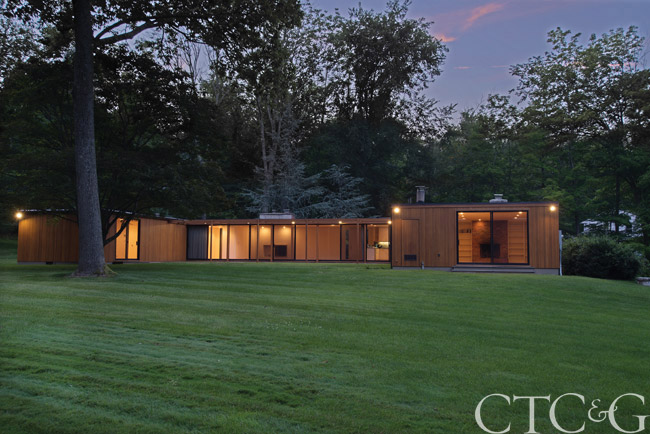 Best Modern
The choice here couldn’t have been easier. During the dog days of August, normally a sleepy time for the real estate market, the Philip Johnson-designed Wiley Speculative House popped on the New Canaan market for $1,575,000. This was Johnson’s first spec house, built in 1954 for a client, Robert Wiley, who already owned a Johnson down the street. It’s one of the master’s more modest homes meant to prototype a simple, one-story, post-and-beam, L-shaped structure with flexible spaces. It was never reproduced although the Wiley structure would be added to over the years—it’s now U-shaped, for instance—and offers three bedrooms and three bathrooms on three acres. Diane Jenkins of William Pitt Sotheby’s International Realty has the listing. 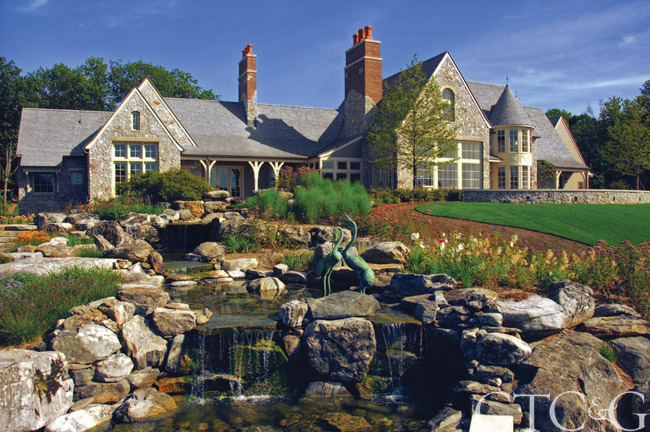 Best Home for Auto Enthusiasts
Marron Hill was built for the ultimate car guy who was looking for a weekend home that would also house his Porsche collection, within a quick drive to Lime Rock’s racing and antique car events. The circa-2006, 7,416-square-foot home, on 18.6 Litchfield acres, offers all that and more, starting with garaging for seven vehicles and something called an auto court, for displaying cars, it seems. There’s plenty for non-enthusiasts to love as well, including walls of windows and extensive terraces to take in an artfully landscaped rocky stream with a waterfall and fountain, and long views over the Litchfield Hills. It’s listed with Judy Auchincloss of Klemm Real Estate.

A version of this article appeared in the September 2014 issue of Connecticut Cottages & Gardens with the headline: Deeds & Don'ts