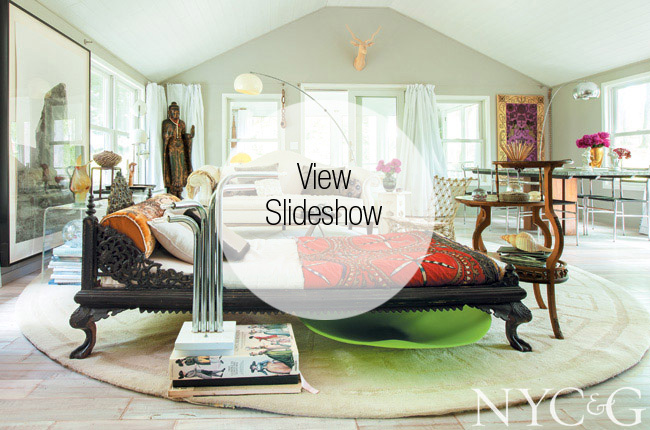 I grew up street-smart in London. I window-shopped on my way to school; my favorite toy was a cash register; traffic noise lulled me to sleep. In other words, I was a confirmed city kid. The countryside? Definitely alien territory. As an adult, I’ve always lived and preferred to vacation in cities, and my work has often kept me on the road. Then a few years ago I realized that my NoHo apartment was almost becoming like another hotel room—a pit stop in my peripatetic life.

It was time I found a getaway place. After some intense real-estate shopping, I bought a tiny cottage in High Falls, a village near the Catskill Mountains in Upstate New York. Constructed in the 1920s from a Sears Roebuck kit, with a 1940s kitchen addition, it’s surrounded by ferns and mature pines, but just a short walk from the village. (You can take a woman out of the city, but . . . .) My first six months of weekending there required some adjusting—I only slept well when I had guests. Alone, I spent half the night trying to identify all the weird croaking and chirping sounds outside.

At around 1,200 square feet, the house was architecturally sound and perfectly charming, but it had too many small rooms and ceilings that were much too low. Jim Gauer, a dear friend and architect, drew up plans for its current, airy incarnation, and during the ten-month renovation, I acted as contractor, often taking quick trips from Manhattan to check on the construction. One day, when the roof was still in place but the walls had been stripped back to the studs so that the house resembled a pavilion, I spontaneously pitched a tent in my future living room. I kitted it out with a blow-up mattress, a duvet, and tons of feather pillows and bedded down for the night. It felt adventurous, like camping on safari. I particularly liked the surreality of windy nights when it literally rained inside, and I was sorry when it came time to clad and Sheetrock the walls.

That’s when I began to embrace the natural world, and now I routinely romance hay wheels, abandoned barns, and glassy lakes in at least half my Instagram posts. If the silence I’ve grown accustomed to in my semirural surroundings isn’t actually golden, it’s at least the antithesis of the white noise I’d lived with for so many years. I write books and magazine articles for a living, and my thoughts are much clearer when they originate from a quiet place. Looking at clouds or a horizon line gives me space to think. Now the birds tell me when it’s time to get out of bed in the morning, and sometimes I wake up in the middle of the night thinking I’ve left the hall light on, only to realize it’s the moon illuminating my bed. It’s awesome.

In addition to two bedrooms and two bathrooms, I have an ample kitchen and a spacious living/dining room, both with cathedral ceilings, as well as a home office—although I often work, eat, and even sleep on the screened-in porch in warm-weather months. Despite my green leanings, I’m still as acquisitive as ever. My most recent book, Heart & Home: Rooms That Tell Stories, actually praises materialism, treating objects as supportive, reliable friends. I know, for example, that the food at my dinner parties looks and tastes better when I serve it from my gold Hall tureens. My Wagenfeld cups fit my hands perfectly, and I could go on about my 19th-century Wedgwood teapot. Then there are my Tse Tse dinner plates and my Fornasetti anything! But as much as I value and appreciate all my belongings, I don’t feel as if I actually own them. I’m just their custodian. They’ll outlive me by decades, and some pieces, like my collection of Bakelite fountain pens, might survive me by centuries. I like preserving things so that someone else can enjoy them after I’m gone. It’s particularly comforting to know that when it comes to the long, long life of my little cottage, I’m just passing through.

A version of this article appeared in the September 2015 issue of New York Cottages & Gardens with the headline: Kit & Caboodle.

Pristine in Park Slope: A Refreshed Circa-1899 Brownstone with Personality Lists for $7.25M

Created by the singer in 2018, the huge LA home is filled with swanky amenities and unique design touches.