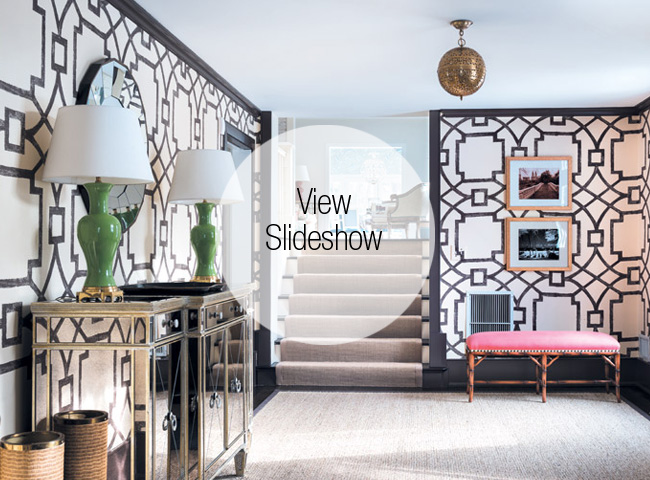 So what if the floral wallpaper dated back to the days of scrunchies and extreme shoulder pads? A 1950s Colonial Revival in Greenwich was too charming to pass up for a young family relocating from New York City. The color palette wasn’t the only historical relic in the house, though, nothing had been touched architecturally since the house was built. The layout was quirky and inconsistent, creating some not-so-charming spaces.

The first thing the homeowners wanted to do was change the flow of the house and get rid of some of those quirks while keeping the character intact. They enlisted David Mooney, of David Mooney Architects, and Bedford Road Construction to open up the floor plan. “It was chopped up and the circulation throughout was not clear and straightforward,” says Mooney.

“We opened up the hallways to give access to rooms, and we redid the entryway so it was a more substantial-feeling space.” Mooney overhauled the narrow and dark kitchen by removing a wall and adding windows, but keeping the original flooring. The kitchen now flows seamlessly with the rest of the house and feels fresh and modern but not too sleek, hanging onto that aforementioned character. Mooney says, “We were doing mostly interior work, so it was relatively easy to keep the charm intact by using the same type of trims and stains.”

During the renovation process, the homeowners brought in New York City interior designer Allison Hennessy, of Allison Hennessy Interiors, to pull the new, open floor plan together. “They have small children and were looking for family friendly, yet stylish, hospitable and warm—a cheerful, fresh and happy kind of vibe,” says Hennessy. She started by lightening up the color palette and staining the floors. “Most of the rooms flow into each other, so we needed to keep them the same color. We went with a pretty pale ivory and stained the floors a custom color. The darker floors really update the space.”

But, as with all good decorating projects, there are exceptions. In the foyer, for instance, instead of the ivory paint, the walls were treated with a graphic, large scale fretwork paper-backed linen. The entryway serves as a passthrough to several other rooms, and green lamps and a velvet pink covered bench give a taste of what’s to come in the spaces beyond.

“I often start with a fabric that has a lot of colors in it and go from there,” says Hennessy. In this case, she bounced off of a cheerful Quadrille textile with shades of pinks, blues and greens. But don’t dare think these traditional colors translate to precious. Hennessy cleverly popped contemporary pieces—an acrylic coffee table and abstract artwork—among the more traditional silhouettes and details (hello, bullion fringe!) to keep the interior fresh. The living room is on the formal side—perhaps the most formal room in the house—but a butler’s pantry just off of it winks at the house’s youthful spirit with a celadon and pale blue wallcovering resembling marbled paper.

The color scheme continues into the family room, which at first glance may appear delicate, but is indeed a workhorse. Hennessy used a mess-friendly indoor/outdoor fabric for the sofas, and the faux grasscloth-wrapped coffee table is equally able to stand up to sticky fingers and tiny footprints. Color goes a little bolder in the sunroom-turned-dining room, where French doors dominate most of the wall space.

Hennessy opted for a Pierre Frey floral wallpaper to introduce a pattern with big impact on the limited wall space. Once again, Hennessy breaks the traditional mold by combining more serious pieces with a statement-making floral crystal-and-gilt chandelier above the table. “It’s classic, but we spiced it up with pattern and color to make it younger,” says Hennessy. “The whole house just has a happy energy to it.”

A version of this article appeared in the January 2015 issue of Connecticut Cottages & Gardens with the headline: The Pursuit of Happiness.

This article appears in the January 2015 issue of Connecticut Cottages & Gardens.