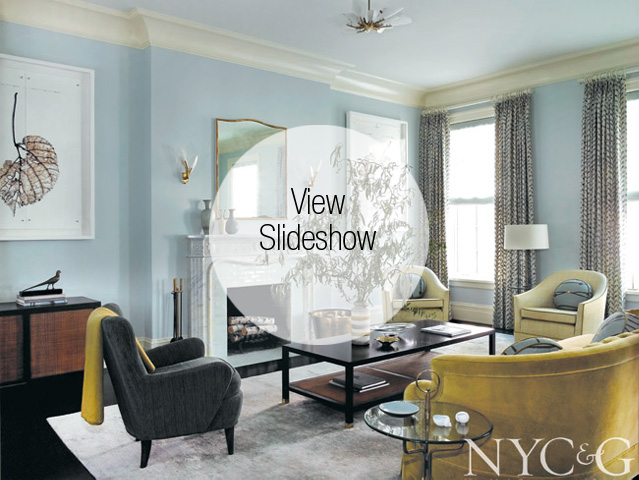 Maybe it’s the thrice-weekly yoga that helps Amy Lau recharge. Or the twice-daily meditation sessions, or just a fierce love for what she does. “It’s busy no matter what,” Lau says of the breakneck pace she keeps. One glance at her C.V. bears this out: In addition to being a top-tier decorator, Lau has created installations for Kohler, Bergdorf Goodman, and Showtime, co-created the Design Miami fair, made appearances on HGTV and LX.TV, acted as a media spokesperson for Benjamin Moore, designed textile collections for numerous companies, and been recognized for her achievements with an honorary doctorate from the New York School of Interior Design.

When her oldest—and very first—clients approached her to orchestrate the renovation of an 1838 Greenwich Village townhouse, Lau took it on with characteristic gusto. The five-bedroom, five-bath, five-floor home is the third residence for Beth and Brad Whitman and their two children, a place they were excited to settle into, but one that needed a total re-do. An elderly woman—a former New York University professor—had lived in the home since the early 1950s and had had it on the market for years. “The price just kept coming down,” says Beth Whitman, who waited it out with her husband until the time was right. When the homeowner became critically ill, she urged the broker to “give it to the couple,” knowing that a sale was imperative. It was “such a mess,” Beth recalls, with stucco walls layered thick over asbestos insulation. Before she knew it, she and her husband found themselves packing up their two-bedroom in Chelsea and getting Lau on the phone.

“We did every single detail,” says Lau, who picked out materials and oversaw all fabrications, working hand-in-hand with the renovation architect. During the past 20 years, Lau has designed each of the Whitmans’ homes and can pinpoint exactly what her clients want. “We’ve known Amy a long time, and her work ethic is insane,” Beth says. “She takes off her heels, gets drywall in her hair, and just goes at it. It’s so cool watching her make stuff happen.”

Beth, a freelance writer and photographer, and Brad, a finance professional, were deeply engaged in the project from the start. They met with Lau, the contractor, and the architect every week—sometimes twice. The couple wanted to maintain the aesthetic appeal of the home’s 19th-century architecture, but furnish it with the mid-20th-century pieces they love. “That was the hardest part,” says Lau. “It took a leap of faith to get everything to work together, but I think we made it look seamless.” The Whitmans also wanted to create a home that was casual enough to be a good fit for their teenagers. Lau’s design for the family room fit the bill: “I made places for their kids to relax, read, or play. There’s even a dartboard in there!”

Tying the primary rooms together is a palette of blue, chartreuse, and pale white, a color combination that deftly brings the outdoors in. Beth is a passionate gardener, and incorporating botanical motifs into the decor was paramount. “Amy really got it,” she says of Lau’s work, seen in a custom-embroidered Fromental wallpaper on the ground floor and a pair of twig-like sconces, as well as a leaf-print headboard in a guest room. The theme is underscored by the Whitmans’ art collection, with pieces by Mary Cassatt, Gustav Klimt, Chuck Close, Sally Mann, Uta Barth, Caio Fonseca, and Doug and Mike Starn, all centering on the natural world. Even better than embracing nature is the way the house can accommodate a crowd. The Whitmans are involved in a number of nonprofits—such as the Fresh Air Fund and the Washington Square Park Conservancy—and frequently host benefits and receptions. “Now we have a great backyard as well as a warm, inviting interior,” Beth says. “It’s such a nice way to use our new house!”

A version of this article appeared in the September 2015 issue of New York Cottages & Gardens with the headline: Natural Beauty.