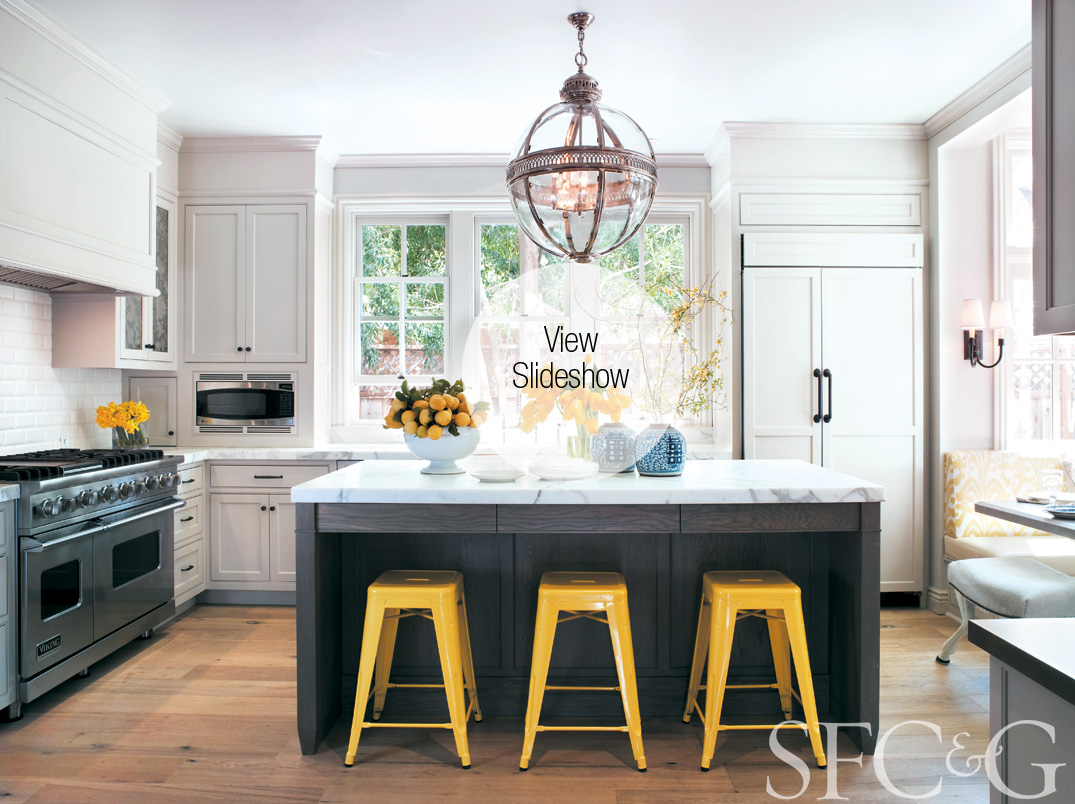 When this 1960s Mill Valley bungalow became home to a young couple and their four small children, it was clear that its renovation would require a deft mingling of various influences and styles. The wife is a San Diego native, while the husband grew up on New York’s Shelter Island, and a large collection of antique furniture handed down from his East Coast family needed to find its footing in their new California home. The homeowners enlisted mixmaster Benjamin Dhong, principal of San Francisco–based Benjamin Dhong Interior Design, to create a family-friendly retreat that would combine the aesthetics of both coasts.

But when Dhong spotted the gray-shingled Craftsman, which evokes a Cape Cod cottage, and took note of the towering redwoods lining the property, he felt that on the outside, at least, the blending of the homeowners’ characters had already taken place. “It was the perfect marriage of California and the East Coast,” Dhong says. He set about transferring that sensibility to the interiors, working closely with architectural firm Heydt Designs to create a clean, classic aesthetic for the five-bedroom home. “I wanted it to be traditional, but I also wanted it to feel like today,” says Dhong, who harmonized vintage pieces with new elements to create the gracious design.

He began by conjuring up a wow moment in the foyer by immersing it in an oceanic blue. Directly opposite the entry, the formal dining room is a fresh take on old-meets-new: An heirloom Chippendale table and a mahogany breakfront are centered on a bold, blue-and-white accent wall. Dhong conceived of the idea after zoning restrictions prevented the creation of a window in the dining room wall. He then riffed on the Old World feel of the vignette by suspending a sleek, brass-lined enamel pendant above the dining table.

In the living room, wide-plank, distressed-oak floors add a rustic note, while a 10-foot sofa upholstered in linen and cotton mohair-covered armchairs provide luxurious (and ample) seating for the entire family. Dhong gave the space a little edge with the addition of two concrete coffee tables. “For me, a room is all about layering textures and keeping things balanced with a variety of shapes and styles,” says the designer. “There’s something about the interplay between the mohair chairs and the waxed cement tables that adds a little sizzle.”

Relaxed elegance is a Dhong signature, and it’s an approach he doesn’t abandon in the kitchen. The sleek gray cabinetry and marble countertops give it understated luxe, while the bright-yellow Marais barstools and lemony ikat fabric in the sunny breakfast nook add youthful pops of energy.

And because it’s the living space of a young family, the designer wasn’t shy about bringing in playful pieces to add whimsical notes, including a goat-legged stool and a faux-bois chair. “I call it my ‘Hansel and Gretel’ chair,” Dhong notes. “Mixing things up makes a space more authentic and beautiful. The old brings gravitas to the new, and the new brings a certain freshness to the old.” It’s a pairing that brings out the beauty in both.

A version of this article appeared in the May 2014 issue of San Francisco Cottages & Gardens with the headline: California Cottage.