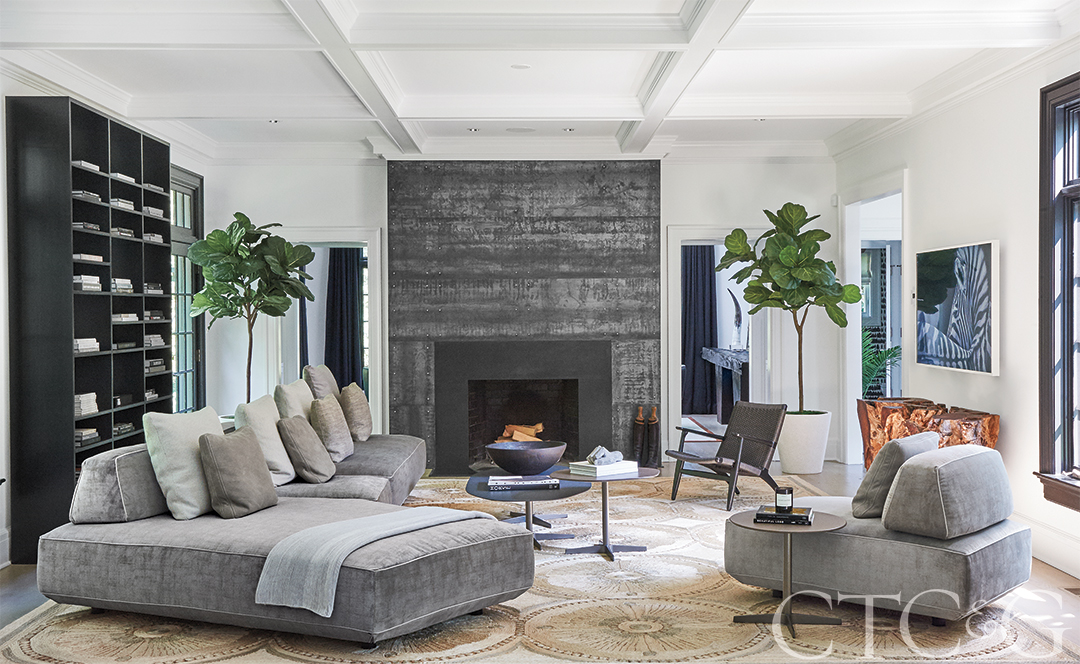 The day that interior designer Calla McNamara arrived on the scene of a Greenwich home renovation most of the construction had been completed, but the interiors were still far from the finish line. According to the designer, many of the furnishings had been selected and most of the finishes were in place, but there were several loose ends and an overall lack of cohesion. She likened the task ahead to solving a puzzle. “Like most renovations, some of the pieces were already there. But we had to reimagine the space, incorporating new and existing
elements to complete the picture,” McNamara says.

The owner, a single mother with a teenaged daughter, wanted to preserve the classic architecture while introducing a little edge to the overall ambience. “The homeowner wears cowboy boots and drives a black Raptor pick-up truck. She did not want a standard ‘mom in Connecticut’ house,” McNamara says. In accordance, the classic shingle-style residence had already been painted a dark color, which gave it distinction and brought the surrounding property and pool into focus. Similarly on the inside, the black window frames take a back seat to the views, while items like the black custom metal fireplace in the living room constructed by builder Zibi Surowiec of Kramer Lane Construction initiated the requisite edge.

Taking her cues from the rich, dark hue, McNamara designed ebony-colored display shelving for the living room and reworked the existing modular sofa into a more interesting seating arrangement. “I avoided the more typical L-shaped sectional set up and totally reoriented the entire room,” says the designer, who added a modern powder-coated metal coffee table and a sleek wood-frame chair to the mix. 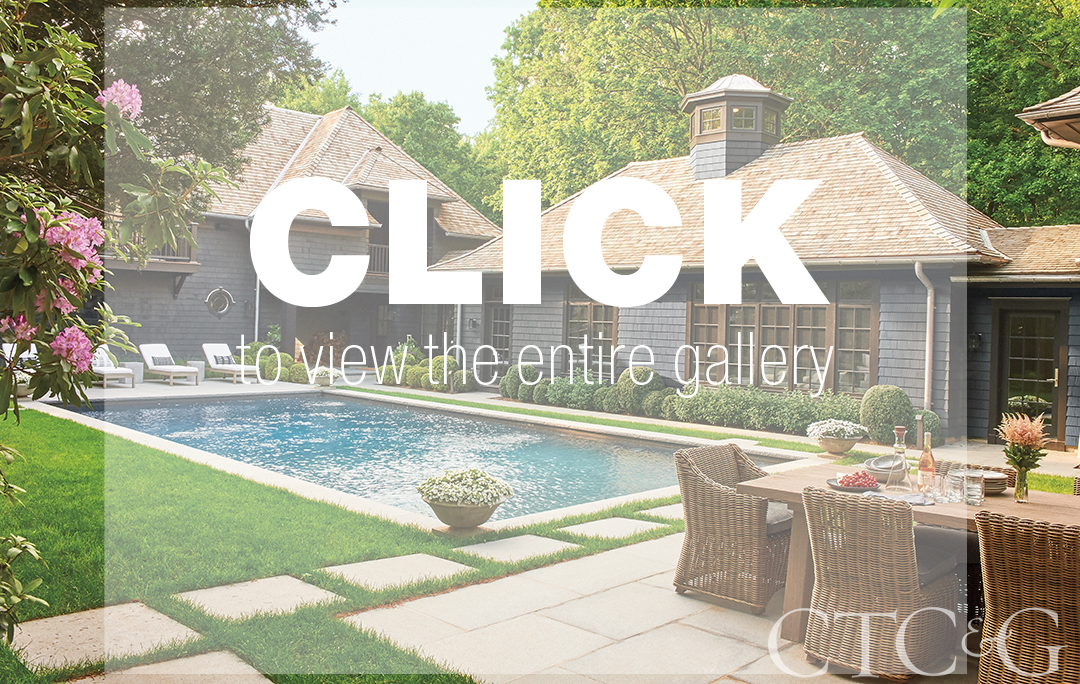 The black accents continue in the family room where a custom dark stained low-slung walnut coffee table contrasts with an existing light-toned upholstered sofa. She also kicked things up a notch in the dining room where the curved navy leather chairs and a glass table are joined by new black drapes, which add warmth and tie back to the home’s other dark elements.

Originally, a pair of very 21st-century octagonal pendant fixtures lit the dining space, but McNamara determined one was sufficient and she reconfigured the second one to hang in the salon. Designated as an intimate space where the owner could read or have coffee with a friend, the latter features two cleaned-lined leather chaises perched on metal frames.

Meanwhile Veronica Campbell of Deane, Inc. took the lead on the kitchen redesign, which claims a slab of white statuary marble with spectacular veining as its centerpiece. “The owner didn’t want to see the stove hood, so we designed cabinets with wire fronts to hide the blower and introduced oil-rubbed-bronze hardware to help add to the rustic look,” says Campbell, who combined painted white cabinets on the perimeter with wire-brushed stained oak cabinets on the island. “The dark and light colors are more eclectic and along with the metal, there’s a good layering of textures.”

The owner’s equestrian background and love of all things equine is evident in much of the artwork, and the designer strategically placed key horse-themed images in the family room and office. In the kitchen, an antler chandelier is a whimsical Western nod.

Perhaps the most challenging space was the oversized master bedroom, where the platform bed looked adrift in a sea of white walls. “The room felt massive,” says McNamara, who took inspiration from the blue velvet bed frame and wrapped the bed and a large curved window in deep blue-gray built-ins, painted the barn-wood fireplace the same color, and added a linen sofa in a similar tone. Here and throughout the house, the designer’s abilities to reconfigure, reorient and rearrange resulted in all the puzzle pieces coming together in a relaxed and welcoming cohesive whole.

A version of this article appeared in the February 2019 issue of CTC&G (Connecticut Cottages & Gardens) with the headline: A Perfect Fit.