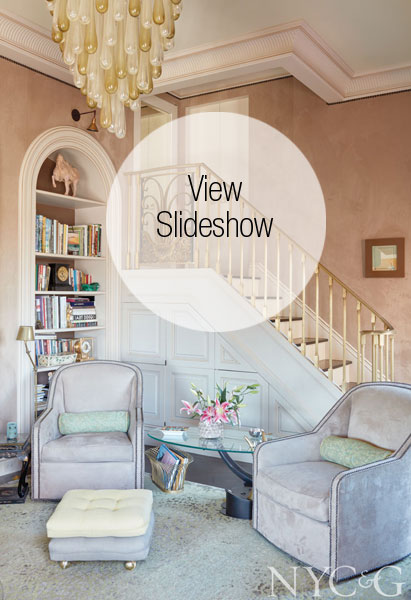 Charles Pavarini III has a little advice for his fellow interior designers and potential clients. “Showhouses matter,” he says with fervor, referring in particular to the annual Kips Bay Decorator Show House. “These events are a great vehicle for displaying your work because a possible future client is able to walk through the space you’ve created and feel the design.”

Which is exactly what happened to a client of Pavarini’s whose Park Avenue duplex penthouse appears on these pages. “The moment I saw the living room Charles had created at Kips Bay in 2009, I immediately knew that I wanted the same colors and the same mood for my own home,” says Shasha Targoff, who lives in the Pavarini-designed aerie with her husband, Michael. “I not only fell in love with Charles’s room, but as we started working together on this apartment, I fell in love with his knowledge of design and appreciation for detail.”

When Pavarini first toured the 3,000-square-foot penthouse atop a venerable Park Avenue building (former residents have included Brooke Astor and William and Pat Buckley), it was as if nothing—and everything—had changed during the 50 years the previous owner had lived there. After a gut renovation, Pavarini began to install some of the very details that had impressed Targoff at the showhouse, the most notable being the decorative Cubist-like tracery on the tray ceiling in the expansive living room. To amplify the drama, Pavarini configured the pierced crown molding so that it “would allow the LED lighting to filter through,” he says. Targoff’s favorite color, lilac, is referenced everywhere: in the ceiling recesses, on pillows and embroidered draperies, and even in a marble-topped side table. “The color is like the tip of an orchid,” she says. “I love it.”

The formal dining room, by contrast, features a vibrant blue lacquer on the walls, which shimmers even when skies are overcast. “At certain times of the year, at certain times of the day,” says Pavarini, “this color is that of the Manhattan sky.” A fitting comparison, given the apartment’s five terraces, the largest of which is accessed directly from the dining room. Anchoring this outdoor space is the penthouse’s most distinctive architectural feature: a freestanding brick teahouse, defined by a formal Palladian-style entryway that belies the intriguing mélange of Gothic, Persian, and Victorian motifs within. “When we started on this room,” recalls Pavarini, “really one of the most impressive structures I’ve ever seen in a New York apartment, there were no windows, no doors, no sense that this could become a real space to occupy.”

Both the teahouse and the apartment’s grander rooms feature soaring ceilings, particularly the upstairs master suite—the residence’s only bedroom—although it nevertheless maintains an intimate, soothing ambience. Elsewhere, vintage Venini chandeliers appear to cascade from every corner, adding extra dazzle to the dining room, the library, and, most notably, the winding entry stairway, which boasts an original circa-1897 work depicting the Dance of the Seven Veils, painted by the Belgian Post-Impressionist artist Fernand Toussaint. “Thank god LEDs had come out in time for us to light all the chandeliers,” says Pavarini, pointing to the 12-foot clear-glass chandelier that fills the stairway and illuminates the striking artwork. Comprising 130 teardrops, it had been a fixture attached to a wall at New York’s Todd Merrill showroom, “but Charles had each piece taken off,” Targoff reports, “and rehung to become the chandelier it is now.”

Shimmery chandeliers notwithstanding, Targoff’s design directive was for every room to be well appointed, but not showy. “Shasha wanted the interiors to feel like she was wearing a couture gown,” states Pavarini, an assessment Targoff readily agrees with. “As a woman,” she says, “I definitely dreamed of having a home that was like a couture dress, one where the design from the outside would be just as beautiful as the detailing on the inside. Every day, it feels good to wear this apartment.”

A version of this article appeared in the Holiday 2016 issue of NYC&G (New York Cottages & Gardens) with the headline: At the Peak of Park.