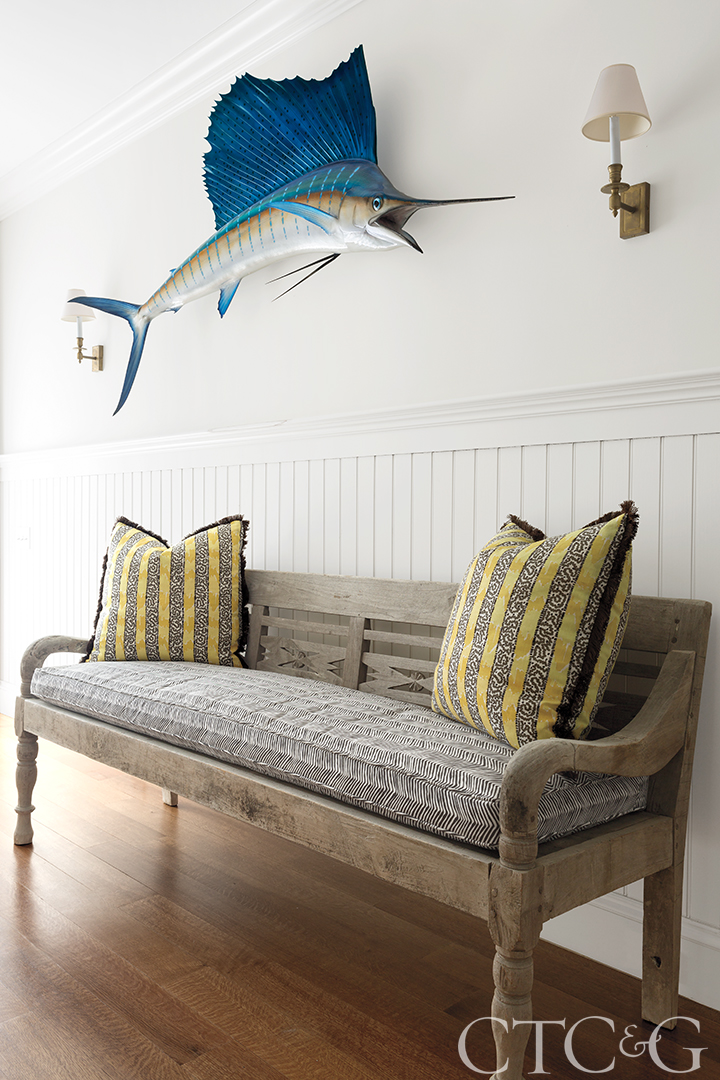 Making something new look old,like it had been there forever, was key for the homeowner of this Rhode Island beach house. Her husband’s extended family had summered here—among a cluster of shingled houses bordering the Atlantic coast with views of Block Island—for 75 years until Hurricane Sandy wreaked havoc in 2012. This new house, completed in 2013 by local architect Nancy Leslie, takes its cue from the Queen Anne–style summer cottage architecture popular in the 19th century. Connecticut–based interior designer Charlotte Barnes blended family mementos, colorful fabrics and unique finds to give the house an easy, breezy style without looking overly decorated.

“We so wanted to bring our old house with us,” says the homeowner. “Charlotte was really good at taking what I had, incorporating new things and making it all look fabulous.” A blue hanging sailfish (a replica of one the client’s mother-in-law had caught in the sixties), an old marine chest, a wicker sofa, some beds, a railing and a painting of the family’s original house by artist Eric Forstmann all made their way into the new abode.

The homeowner wanted to hire Barnes as soon as she visited the designer’s own house in Connecticut. “I liked the feeling I got walking into her house,” the client explains. “I felt comfortable. I knew that Charlotte could do what I wanted.” 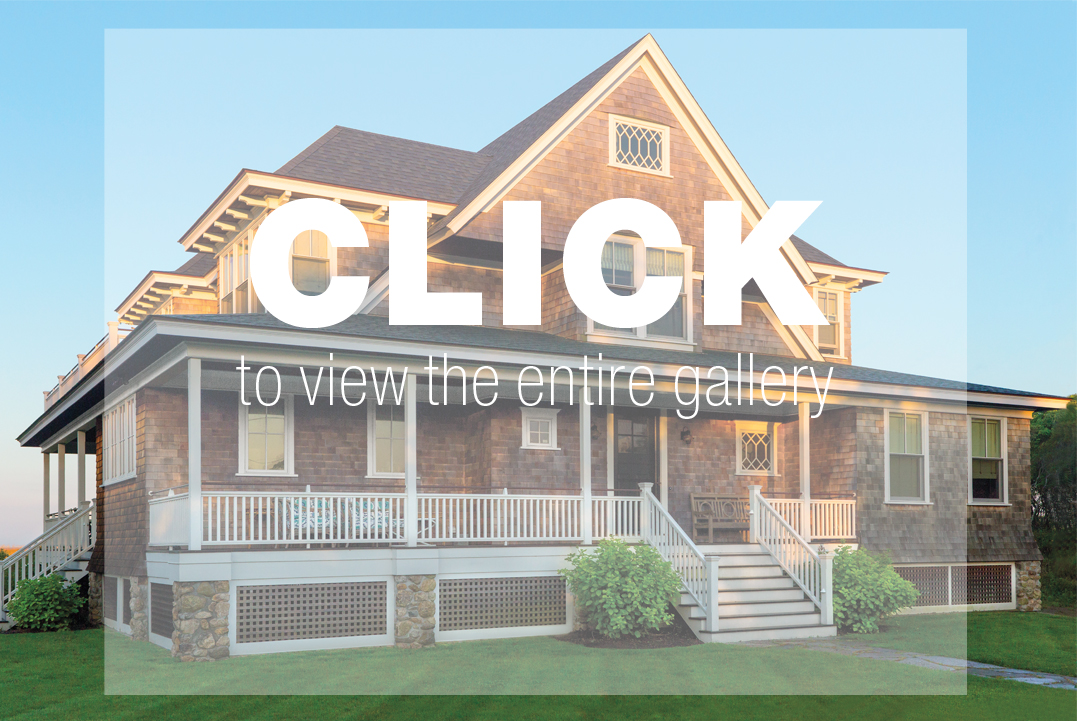 For authenticity and a sense of place, Barnes shopped locally—scouring stores in Rhode Island, Hudson, Connecticut and the Hamptons. She took her client to a Quadrille outlet where they found the fabrics that jumpstarted the color scheme.

“I just started pulling fabrics and snipping things and playing around,” says Barnes. “And boom, we had a couple of things that we could really work with. I’m very much about buy what you love, and we will work it out.” The client loves green, blue, brown and corals, so the designer started there.

“We did this on a shoestring with these beautiful fabrics,” notes the homeowner. “Charlotte knew that’s how I wanted to do things. She got me. This is a beach house. It’s not meant to be fancy.”

While Barnes likes to inject jolts of color, she keeps a common thread throughout. “It’s nice to think about the house as a whole,” says the designer. “When we make the presentation to the client, they get a feel for how that thread carries through.”

The four-bedroom home is only used in July and August, when family and friends gather to relax and enjoy. The homeowners often entertain on the porch outside the second-floor master bedroom because of its breathtaking views of a pond, seagrass and the ocean beyond. Everywhere, comfort was crucial—practical fabrics that could withstand dogs on the furniture and people traipsing in from the beach.

“There are lots of dogs, everybody’s up on the sofa, everybody’s up on everything,” laughs Barnes. “You want to be able to sit, put a drink down, relax and be comfortable. It’s about plopping down and not wanting to get up. You want everybody to stay a while.” A red and white quilt is slung over the sofa in case someone wants to take a nap. A blanket trunk sits at the end of a bed in a guest room, providing a home for luggage. It’s all practical, inviting, layered and fun.

Finding a designer who respected the sharing of ideas and could sometimes take the client out of her comfort zone was critical. “If Charlotte gave me three choices, she always knew which one I’d pick, and usually I’d go with the safest,” says the homeowner. “But sometimes I’d say to her: ‘Tell me what to do.’ Charlotte had a knack for letting me, be me.”

A version of this article appeared in the July/August issue of CTC&G (Connecticut Cottages & Gardens) with the headline: A Summer Place.