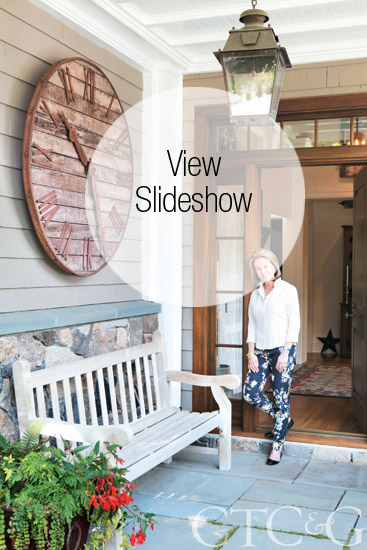 It's like the woman who has had the same hairstyle since high school,” says designer Ellie Cullman. “You have to change and grow if you want to stay modern.”

Cullman, cofounder of Manhattan’s venerable decorating firm Cullman & Kravis, practices what she preaches, duly noted in the style evolution of her firm’s inimitable work. Firmly rooted in the traditional, Cullman’s approach to decor has evolved over the past decade: There’s a more modern bent to her classical roots, giving her interiors a younger and fresher feel.

Cullman’s new attitude makes an enthusiastic appearance in her family’s country house in Fairfield County. In her husband’s family since the 1920s, the house has undergone several renovations since the 1970s when Ellie and her husband took it over. The last one was completed four years ago when Cullman wanted some structural changes: evening out walls for symmetry, replacing windows and revamping the floor plan. (“I needed order restored to the world!” she says.) The palette of 19th-century, milk-paint colors gave way to a cleaner more-streamlined style. In the hands of Cullman, however, streamlined does not mean sparse. The interior manages to be full without looking cluttered, while showing off an enviable collection of Americana. If you thought folk art was old fashioned, Cullman will make you think again. Crisp and calm colors allow pieces to pop and delight giving folk art a slightly—and surprisingly—modern edge. “I feel folk art is more pop art than artifact,” she says. “I wanted to show its other side, which is the funky, fun side.”

In the living room, chestnut beams from the property and a fieldstone fireplace are original to the house. A handtufted Elizabeth Eakins rug stayed, but otherwise, the room’s layout and architectural details were tweaked to give the room a more classical feel. Various portraiture is dotted around the room (“I like all these wackos talking to each other,” says the designer, tongue somewhat in cheek). Animals, mostly in the form of weathervanes, also appear often. “I wanted the architecture to be more orderly and classical,” Cullman says. “The animals and the pictures make the serious less so.”

And in true Cullman & Kravis style, couture details reign supreme. Light blue sofa pillows have a delicate whalebone inlay. Twill curtains are trimmed in three different colors of raffia. “As a designer, you want to bring something to the table that you won’t see somewhere else,” says Cullman. “This is where we can really be creative.”

If it’s the devil-is-in-the-details attitude that shows off Cullman’s creativity, then it’s the furniture choices that represent her mastery of the mix. A painted console sits comfortably near a custom mahogany coffee table and a 19th-century, Louis XIII-style table. This variety of forms and eras has come to define the firm’s sought-after, modern-traditional vibe. “I love mixing custom with antiques. So many houses look like museums,” says Cullman. “When you embrace the mix, you give it life.”

In the dining room, chairs from the Sears & Roebuck antiques department were re-covered in a punchy red check. Reproduction Italian Renaissance frames became a pair of mirrors: The painted surface hinting at that folk-art vocabulary Cullman loves. Animals make another appearance here too: A couple of gilt rooster weathervanes from the 1870s top octagonal walnut console tables found in Tuscany. A pair of carved lions originally from a Synagogue in Philadelphia flanks the fireplace. Disparate pieces that, in the wrong hands, could spell chaos, but with Cullman’s deft touch manage to look sophisticated without being stodgy.

“When I started out, I was a real purist,” says Cullman. “Now it’s much more modern and bright and cheerful. I’m at that moment where there is nothing I want to change or upgrade. It’s a nice place to be.” At least, that’s what she says for now. ﻿